Epigenetic mechanisms in the pathogenesis of Lynch syndrome

Inherited defects in the DNA mismatch repair (MMR) system, MLH1, MSH2, MSH6, and PMS2 genes, underlie Lynch syndrome, one of the most prevalent cancer syndromes in man. The syndrome offers a model for cancers arising through MMR defects and microsatellite instability, which applies to ˜15% of all colorectal, endometrial, and other cancers. Lynch syndrome also illustrates the significance of the epigenetic component in cancer development. Epigenetics refers to heritable changes in gene expression without a change in the genetic code itself, as opposed to genetics, which refers to information transmitted in DNA sequence. Inactivation of tumor suppressor genes by epigenetic mechanisms is an acquired property of many tumors developing in Lynch syndrome. Furthermore, constitutional epimutations of MMR genes may explain a proportion of mutation-negative families lacking MLH1 or MSH2 protein expression in tumor tissue. In this project we aim to study the role of epigenetic mechanisms in the pathogenesis of Lynch syndrome, with a current focus on DNA methylation.

In Lynch syndrome, genotype and phenotype are often poorly correlated leaving room for epigenetic determinants for phenotype. Apparent selectivity in tumor spectrum despite the fact that all tissues equally carry the predisposing mutation is a related but unsolved question. Environmental and lifestyle factors have been implicated in Lynch syndrome and provide an opportunity for the epigenetic system to serve as a link between genotype and environment. Epigenetic mechanisms that regulate gene expression according to the prevailing cellular requirements are excellent candidates for factors capable of inducing subtle shifts in the dosage of gene product, thereby preventing or promoting tumor development. This is highly relevant to MMR genes and particularly MLH1, which is prone to frequent epigenetic inactivation. In sporadic colorectal cancer epigenetic inactivation of MLH1 is associated with a more generalized CpG island methylator phenotype (CIMP).

Colorectal cancer (CRC) develops via multiple steps which involve genetic changes, such as mutations in growth-regulatory genes, and epigenetic alterations, such as CpG island hypermethylation. These changes accumulate over time in the normal tissue, for example due to many environmental factors such as diet, and may result in pre-cancerous field defects. Genes having a high level of methylation in peritumoral tissues could be used for early detection and risk assessment of CRC, also in the hereditary colon cancer syndromes. Being involved at all stages of multistep tumorigenesis, capable of functionally substituting for genetic changes, and reversible, epigenetic changes are likely to provide targets for a growing number of clinical applications for both Lynch syndrome and sporadic cancers in the future. 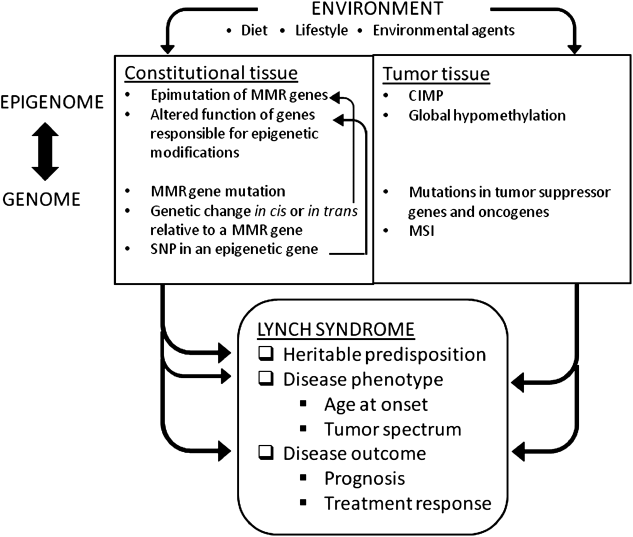 Fig.1 Interplay between epigenetic, genetic, and environmental factors as contributors to Lynch syndrome predisposition as well as phenotype of the disease (Peltomäki, Clin Genet 85: 403 – 412, 2014).