The environmental epigenetics of CRC

Though Lynch Syndrome (LS) is a dominantly inherited disorder, the disease phenotypes vary considerably between mutation carriers from the same LS families, demonstrating an intra-family variation which can only be caused by modifier genes or environmental factors. Colorectal cancer (CRC) in general is clearly a disease of increasing age, and there is strong evidence that a risk of CRC can be modified by environmental factors such as diet. Less clear is, whether and how life-style factors influence the cancer risk in familial CRC. Our studies are based on presumption that along with aging certain dietary components especially in Western-style diet (WD) are important modifiers of methylation patterns in the colon and thus may affect the transcription of genes involved in tumorigenesis. 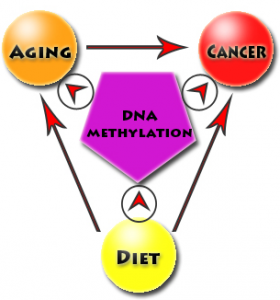 The interplay between diet, aging, epigenetics, and cancer

We further reason that in mutation carriers requiring just a second hit of the inherited susceptibility gene for malignant transformation, it is possible to detect the earliest expression and methylation changes, which even precede and might promote the second hit, and distinguish these from alterations occurring later in oncogenesis. The importance of epigenetic alterations such as DNA methylation changes in the initiation of CRC is known, yet, the earliest events in normal colonic mucosa available for early detection and prevention of cancer development remain to be elucidated. Our studies aim to solve the mechanisms that mediate the effects of diet on tumorigenesis. Finally, they will help to understand complex genetic and environmental interactions on epigenetic regulatory changes and identify molecular pathways important as preventive and therapeutic targets, since unlike genetic changes epigenetic alterations are potentially reversible. 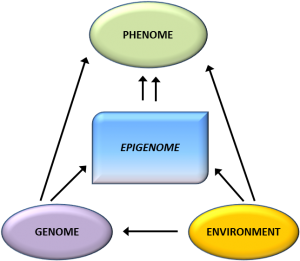 Mouse models provide a valuable resource in the field of environmental epigenetics including studies on changes mediated through diet since studies on diet effects are quite infeasible in humans due to a long life span and a high variability in individual dietary habits and genetic backgrounds. Previous studies suggesting that Western-style diet (WD) induces gastrointestinal tumors in mouse models for familial intestinal cancer and even in wild-type (WT) mice without any carcinogen treatment prompted us to study the effects of WD exposures on gene and protein expression and DNA methylation on mouse tissue.  Both global and targeted molecular approaches are applied to both in histologically normal colon mucosa and colonic tumors. 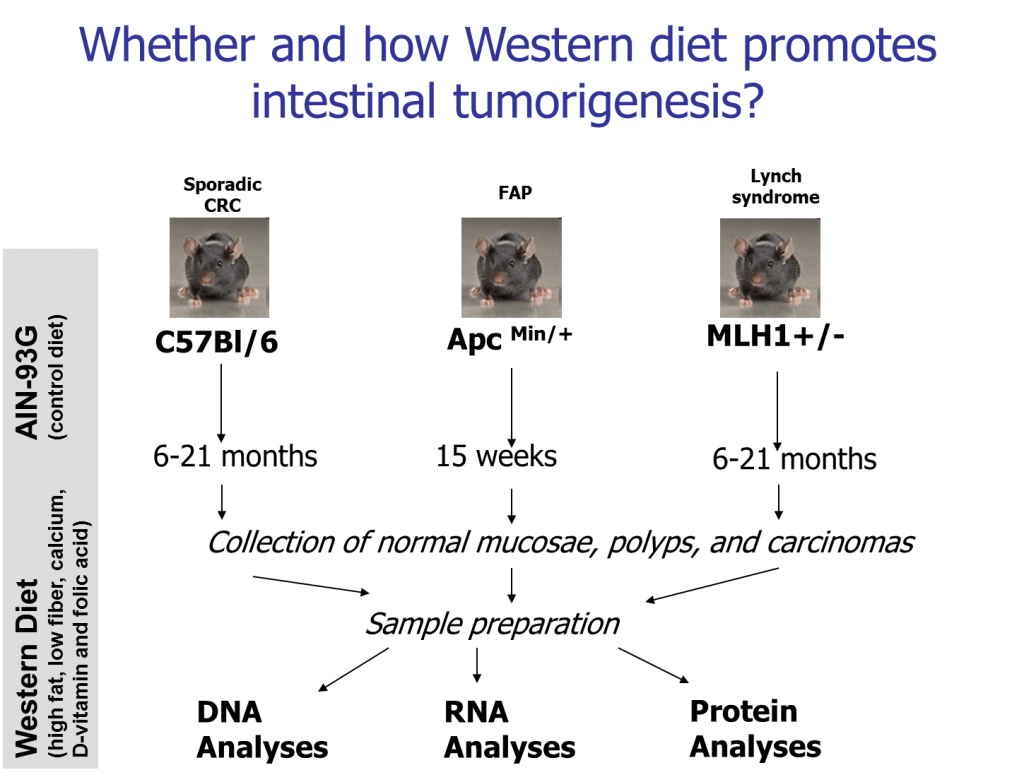 We have shown that WD causes cancer-predisposing RNA and protein expression changes already in histologically normal colon mucosa. Many of which are potentiated by Mlh1 heterozygosity reflecting higher sensitivity of the predisposed mucosa to WD. The significance of WD on CRC risk is highlighted by the fact that over 80% of neoplasias develop to mice fed with WD. Furthermore, we found that Mlh1 was still nicely expressed in both Mlh1+/- and Mlh1+/+ mucosa which indicate that the expression differences seen are prominent early markers for colon oncogenesis and happen prior to the second inactivating hit of Mlh1.

The study currently continues with a whole transcriptome and proteome analysis of 18 and 21 Month old mice normal mucosa and observed neoplasias to reveal the complete affected pathways.