In an interview with Hanna Ruutu for Aleksanteri News 2/2015  Katja Lehtisaari spoke about ongoing research projects related not only to changes in Russian media business environment but also to the role of media in the semi-authoritarian transitional regimes of Central Asia. At that time, she was a visiting research fellow at the Reuters Institute for the Study of Journalism, University of Oxford. Now she’s back, so we asked her for an update. 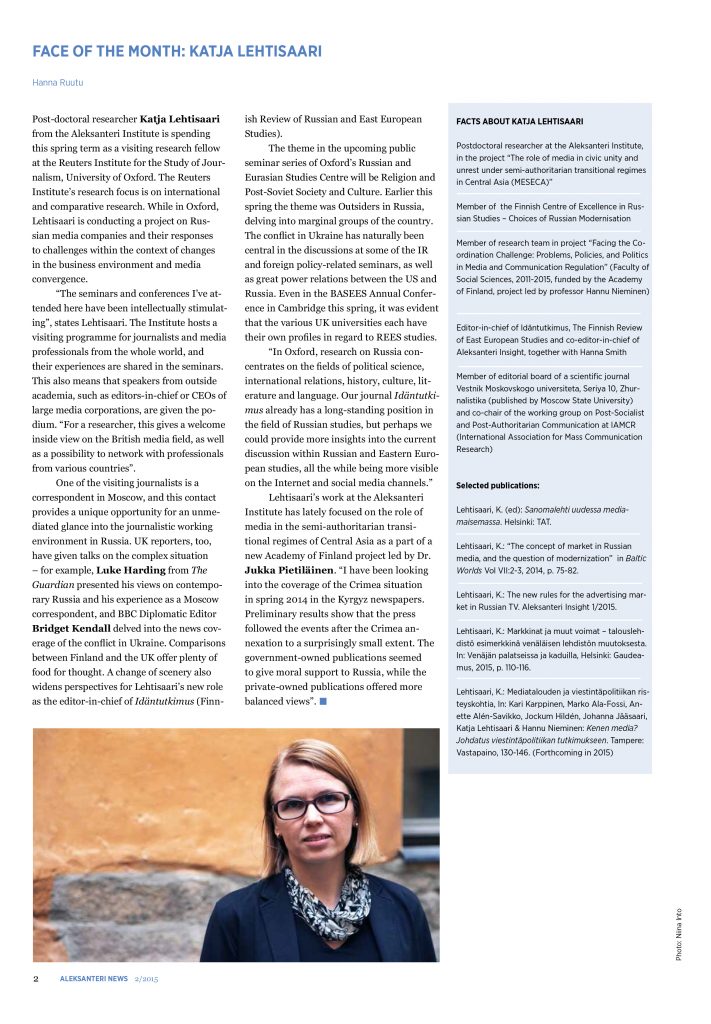 Katja is one of the members of the new Russian Media Lab team coordinated by the Aleksanteri Institute. In that context, her research has been increasingly focusing towards the questions of media regulation and formation of media policy.

“Russian media market has continued to go through changes in regulation. Together with economic constraints like falling advertising figures, these changes seem to lean towards the concentration of ownership on the hands of wealthy Russian owners while the role of non-instrumental commercial publishers, especially foreign investors, is diminishing.”

Katja is one of the few Finnish scholars experienced also in Central Asian questions. She visited Kazakhstan and Kyrgyzstan  together with the Central Asian media research group last winter and is now preparing for a teacher exchange trip to Kazakhstan in November. “The visit to Kazakhstan and Kyrgyzstan gave an excellent overview of the media landscape as well as societal developments in these countries, and we are working on analysis based on the interviews with Kyrgyz editor-in-chiefs and media experts.”

In media studies, comparative method is a fruitful way to understand global changes in news media. “I have lately also worked on another comparative project, on the business models of Nordic news media companies. This project has helped to contextualize many ongoing changes that are common to news media around the world mainly due to rapid development in digital technology and online environment”, concludes Katja.