A few academics are as capable in juggling the diverse responsibilities of senior researcher, project manager and pedagogue as Sari Autio-Sarasmo. Sari has been involved in countless high profile international research endeavours – the latest being the Centre of Excellence in Russian Studies, Choices of Russian Modernisation (2012-2017) – in both scholarly and administrative roles but nonetheless kept a close contact with her students from undergraduate to PhD level. Her own on-going research is centered on innovations, diffusion of knowledge and digitalization in Russia in a global context.

How does she manage to keep all balls in the air? “It is actually very rewarding – the idea at the University of Helsinki is that researchers teach and teachers do research. In today’s global and very competitive world we have to offer students the latest information based on our scholarly work. Students are extremely bright and critical, they have qualifications to understand the complicated world better than the older generation. This is a challenge that we take seriously.”

In 2009 Sari was preparing for the 9th annual Aleksanteri Conference as head of organising committee. The conference held extra significance as it was also the final event of a three year research project Knowledge through the Iron Curtain. Here’s what she told the Aleksanteri News about technological cooperation between the two, politically hostile blocs during the Cold War: 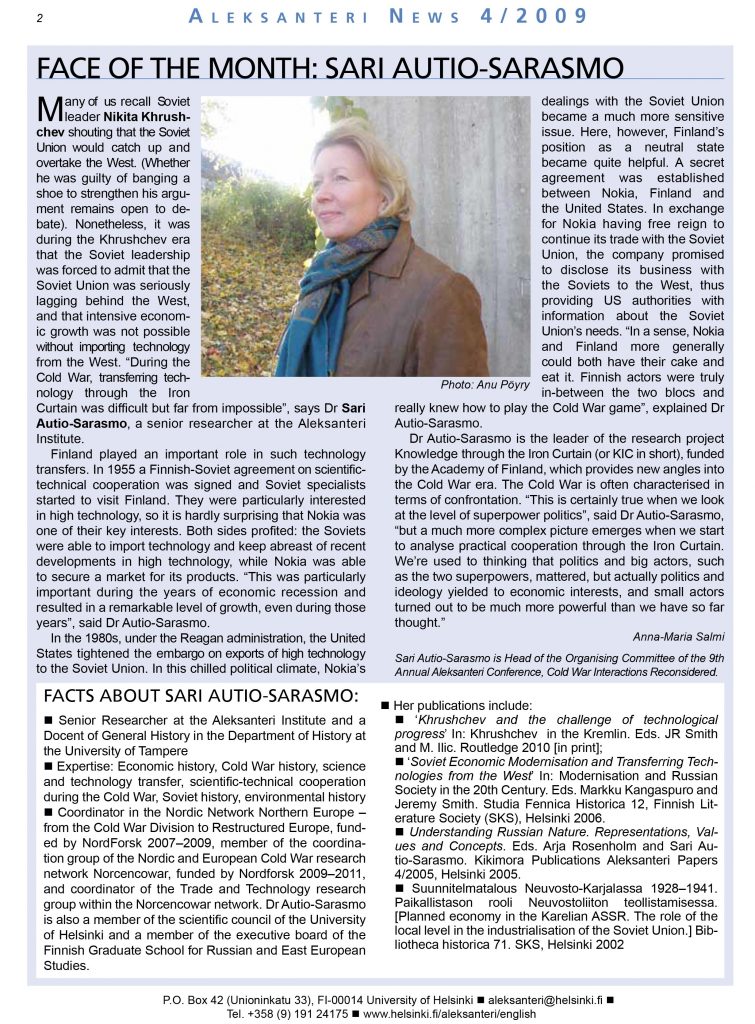 The KIC project ended in 2009 but spurted a lively continuation involving active networking with Nordic universities. Three PhD dissertations and several publications including an edited volume Reassessing Cold War Europe have been accomplished around the themes of Cold War studies thanks to Sari’s efforts.

But what keeps her busy today? “I’m happy and excited about my new role as leader of a minor subject programme in Russian studies aimed at master level students from different faculties and disciplines. The new module focuses on the hot spots of Russian society: all courses are constantly updated in order to give the latest information. The modular structure is an efficient way of broadening the base of Russia experts in different fields of society and business.” In addition, Sari is involved in planning an international Master’s Programme in Russian Studies to be launched by the Faculty of Arts in autumn 2017.

What about Cold War? Some people feel that it’s not a question of history anymore but on its way to return. “There has been a lot of discussion about the new Cold War but conceptually it is very problematic. The post-WWII world was completely different from the current situation. True, we live in politically turbulent times and it is difficult to say where all this will end, but I’d rather see a totally new concept created or the concept of Cold War at least clearly re-defined”, states Sari. She does not believe in the rise of new Iron Curtain in the world of science and technology. “It’s clear that the political sphere is now quite separate from science. In today’s globalized world science and technology are so interlinked that it will live its own life in spite of political disputes.”