In 2016 Riikka Palonkorpi smoothly handles the task of coordinating three doctoral programmes under the Faculty of Social Sciences at the University of Helsinki, with more than 600 PhD students to look after. But seven years ago when she was interviewed for Aleksanteri News 1/2009 she was a PhD student herself. 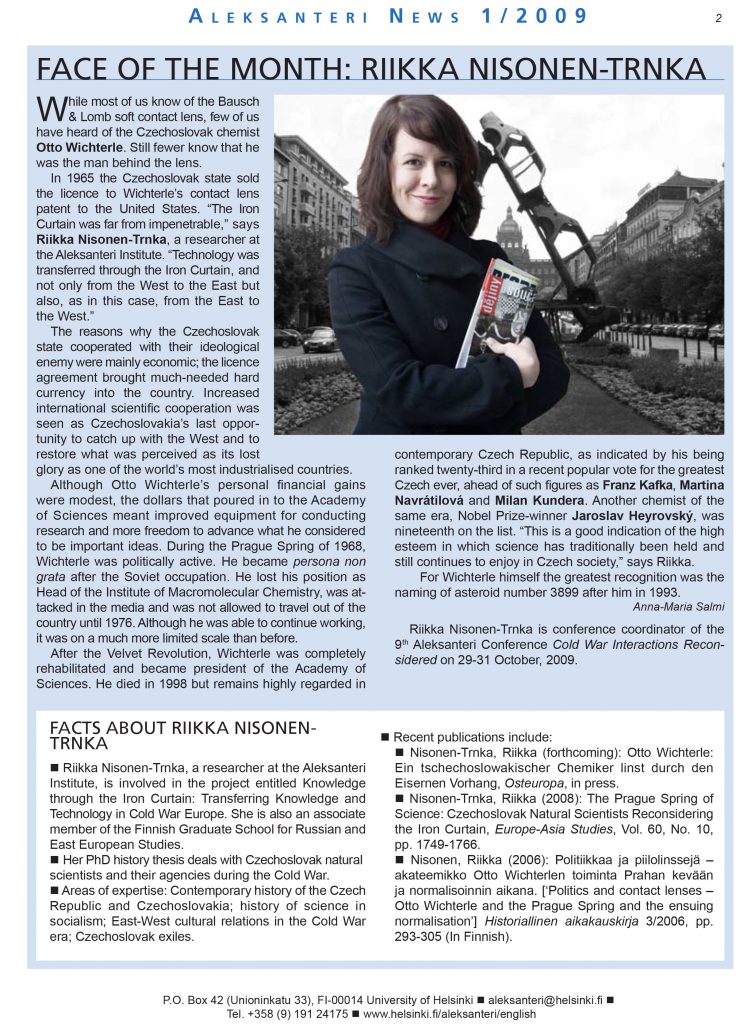 Riikka defended her dissertation entitled Science with a Human Face: the Activity of the Czechoslovak Scientists František Šorm and Otto Wichterle during the Cold War, in 2012 at the University of Tampere. Her work got a very positive reception in the Czech academic community. “My dissertation was recently translated into Czech and will be published in the Czech Republic by the publishing house Academia. After my defense, I also had the honor to be interviewed as an expert on Wichterle for material that is used in Czech schools”, rejoices Riikka. The interview was recorded in the middle of an exhibition built around Wichterle and the history of the soft contact lens in his native town Prostějov.

So, it seems that Otto Wichterle is considered an important figure in the Czech Republic. What about the status of science and scientists in general? “Czechs are proud of their high technological skills and standards and of the people such as Wichterle, who defended the value of science in times when the regime downgraded academic freedom. However, although scientists are widely appreciated and respected in the country whose economy has been rapidly growing in the recent years and unemployment is one of the lowest in Europe, links between academia and enterprises are relatively weak and the salaries at institutes of higher education are low.”

In Finland, the economic situation is glummer and also the challenges faced by academic community are different.  Riikka sees a sort of surprising resemblance here, however: “Sometimes the recent heavy cuts at the universities in Finland, administrative reforms and science policy discussions cause a slight feeling of déjà–vu: they remind me of the atmosphere back in socialist Czechoslovakia. Just like back then, scientists and scholars these days have to justify the significance of their work in front of the society and state to the extent that it takes a lot of time and energy from their actual work.“

There is subtle hope in this analogy: despite the difficult times, Czechoslovak science managed to thrive and develop. Let’s hope this rings true for Finnish scholarship as well!

Markku Kangaspuro, Director of Research, was just starting to head a project within a larger international Memory at War collaborative research project when interviewed for Aleksanteri News 1/2010. The Finnish research group focusing on the memory of the Second World War kept busy not only Markku but employed also Jussi Lassila and Matti Jutila, both of them finishing their theses at the time. 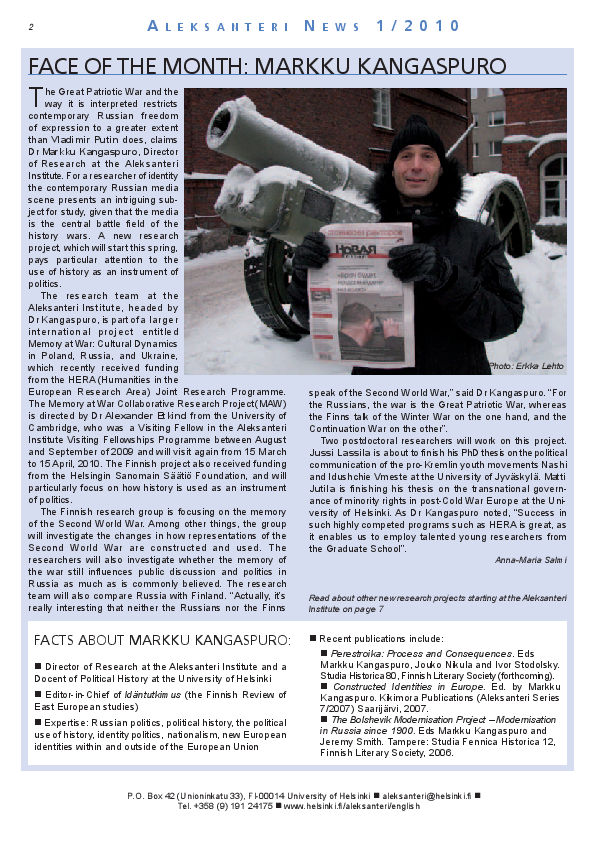 A lot has happened and much has changed during the 20 years of Aleksanteri. We asked Markku to analyse Institute’s strengths: what has kept it thriving throughout its history?

“Definitely one of the cornerstones of our work at the Institute has been strict academic approach to our research topics and consistent research programme. With this backbone, we have been able to develop the Institute and give quite significant impact on public discussion. Valuable recognition for our academic achievements and consistency was the funding of The Finnish Centre of Excellence in Russian Studies – Choices of Russian Modernisation by the Academy of Finland for years 2012-2017. The second, although not the least, strength is the great work community consisted of nice persons and excellent researchers and experts. As a result, we have been quite successful establishing a wide variety of research projects based on competed funding.”

How about your own research interests and projects: what keeps you most motivated in your work today?

“Russia is never boring: it changes all the time, unpredictably. From the cultural perspective, it is a really interesting and rich country. Although at the same time, it sometimes comes to my mind that life would be much easier if I studied something else to which our domestic attitude would not be so emotional. My research path has taken me somehow back to my dissertation’s topics: nationalism and identity studies. The rising wave of nationalism in Russia and Europe, and the recent tension between Russia and the West have made these themes topical. One of my longstanding research projects is the political use and misuse of history in Russia and in particular interpretations of the Second World War and Stalin’s role in the history. In this context, the Victory Day commemoration and changes in its political content are interesting questions. The second subject is Russian concept of the strong state: what kind of interpretations it produces and what consequences it has in society. I am also leading the Russian Media Lab project concerning the freedom of media in the economic, cultural and political context. All these three projects intertwine with the CoE to which I also give my contribution. All in all, Russia as a research subject and cooperation with great colleagues and research teams keep me not only motivated but also busy.”