During 2016–2019, Ilkka Lindstedt was a Fellow at the Helsinki Collegium for Advanced Studies. In this piece, he presents some results of his Collegium project “Early Islamic inscriptions as historical sources” and demonstrates that the development of a distinct Islamic identity was slower than what has commonly been thought in scholarship on early Islam.

Studies of early Islam, by Muslims and non-Muslims alike, have almost without exception taken as axiomatic that Islam from its earliest days constituted a separate religious confession distinct from others – in particular, distinct from Judaism, Christianity, Magianism, and of course from the mushrikūn, those who “associate other beings with God.”

In this article and later studies (particularly his monograph Muhammad and the Believers, 2010), Donner has questioned this idea of a distinct Islamic identity during the life of the Prophet Muhammad (d. 632 CE) and some decades later. As his evidence, he uses early dated and datable sources, such as the Qur’an, Arabic coins and inscriptions, as well as Syriac texts. 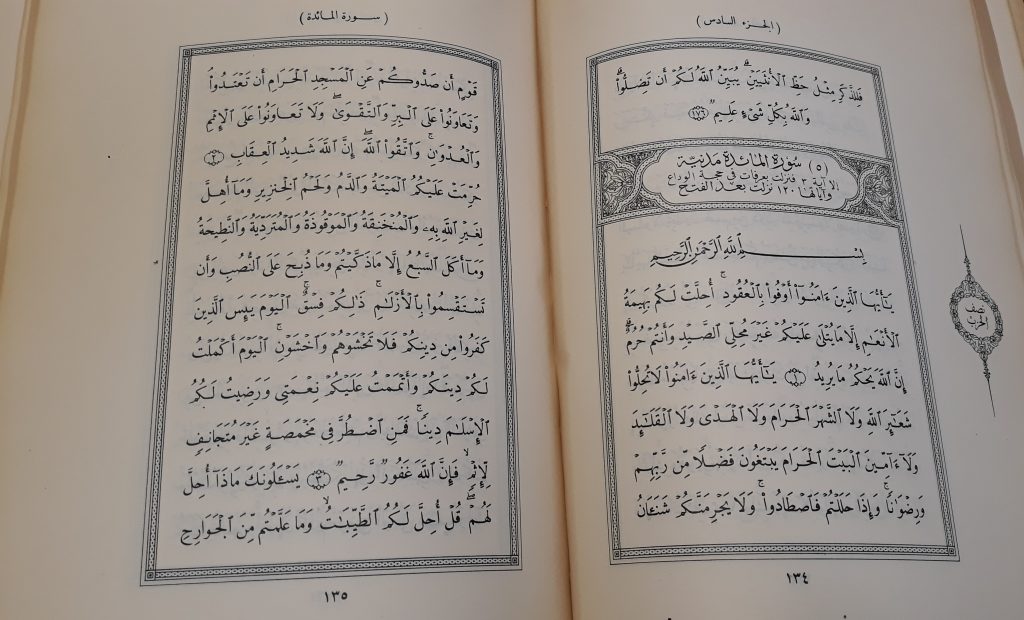 Fig. 1: The beginning of the fifth surah of the Qur’an, photo by Ilkka Lindstedt

For example, Qur’an 3:113–114 states: “There are some among the People of the Book who are upright, who recite God’s revelations during the night, who bow down in worship, who believe in God and the Last Day, who order what is right and forbid what is wrong, who are quick to do good deeds. These people are among the righteous” (transl. Abdul Haleem).

Thus, Donner argues, it is probable that the early community of believers included people from distinct backgrounds: Jews, Christians, gentiles, and others who accepted the stringent monotheism of the community and the Qur’an as a new revelation adding to but not necessarily supplanting earlier revelations. To use the terminology of social psychology, the believer affiliation that the Qur’an articulated and put forward was a recategorized and superordinate identity that did not exclude religious sub-identities.

According to Donner, it was toward the end of the seventh century – around 50 years after the death of the Prophet Muhammad – that Islamic identity properly speaking started to be articulated. This occurred through e.g. discoursal processes where the believers adopted the names “Muslims” and “people of Islam” as their in-group designations and drew the border with Jews, Christians, and others by emphasizing the overarching signification of the Prophet Muhammad and rituals that were specific to Islam.

Arabic inscriptions and the “parting of the ways”

Fred Donner’s hypothesis of the late “parting of the ways” (to borrow a concept from early Christian studies) has been received with both appraisal and criticism. In any case, his studies have been widely read, and even those critical of the argument have had to react to them.

To test Donner’s hypothesis, I conducted, during my Collegium Fellowship (2016–2019), a systematic analysis of early dated Islamic-era Arabic inscriptions engraved or painted on stone. These are a unique corpus of evidence, because it is

a) produced by the members of the community of the believers, so it does not suffer from outsider stereotypes;
b) produced by both elite and lay people;
c) often absolutely dated by the writers;
d) the inscriptions are religious in nature and hence proffer information on how the believers perceived and articulated their religiousness and religious identity.

For a comprehensive examination of the available evidence, I collected the (around one hundred) published Arabic inscriptions dated to 640s–740s CE, a period when other sources are scarce. I reread, translated, and analyzed the inscriptions. My study will be published as an article entitled “Who Is in, Who Is out? Early Muslim Identity through Epigraphy and Theory” (Jerusalem Studies in Arabic and Islam 46, 2019). As my analytical framework, I used the social identity theory, promulgated in social psychology since the 1970s.

The Arabic inscriptions, I submit, provide evidence corroborating Donner’s suggestion. If anything, the inscriptions suggest that the Islamic identity-formation process was slower than Donner put forward in his article, with identity negotiation and permeable borders being attested in the epigraphic texts well into the eighth century CE.

To summarize my findings, the corpus of dated Arabic inscriptions attests indeterminate pious formulae up to the 690s CE, when the first instances of the emphasis on the Prophet Muhammad surface in the texts. In the 700s–720s, there are first mentions of specifically Muslim rites such as pilgrimage, prayer, and fasting. Moreover, it is in the 720s–730s when the words Muslims and Islam began to become consolidated as references to the in-group, supplanting the more ambivalent “believers.”

In my article, I suggest that it is around these decades (720s–730s CE) when we should date the “parting of the ways.” That is to say, since that time most Muslims have categorized themselves as being separate from other religious identifications, such as Jews and Christians, though intergroup contact and influence naturally continued throughout the centuries.

As an example, let us cite the following text. It is written in ink on the wall of a building nowadays known as Qaṣr Kharrāna, in Jordan. The text is written by someone named ʿAbd al-Malik ibn ʿUmar; the inscription is dated to 710 CE. The ink is badly damaged today (see Fig. 2, around the center of the photo, for the inscription), but most of the text is still decipherable. 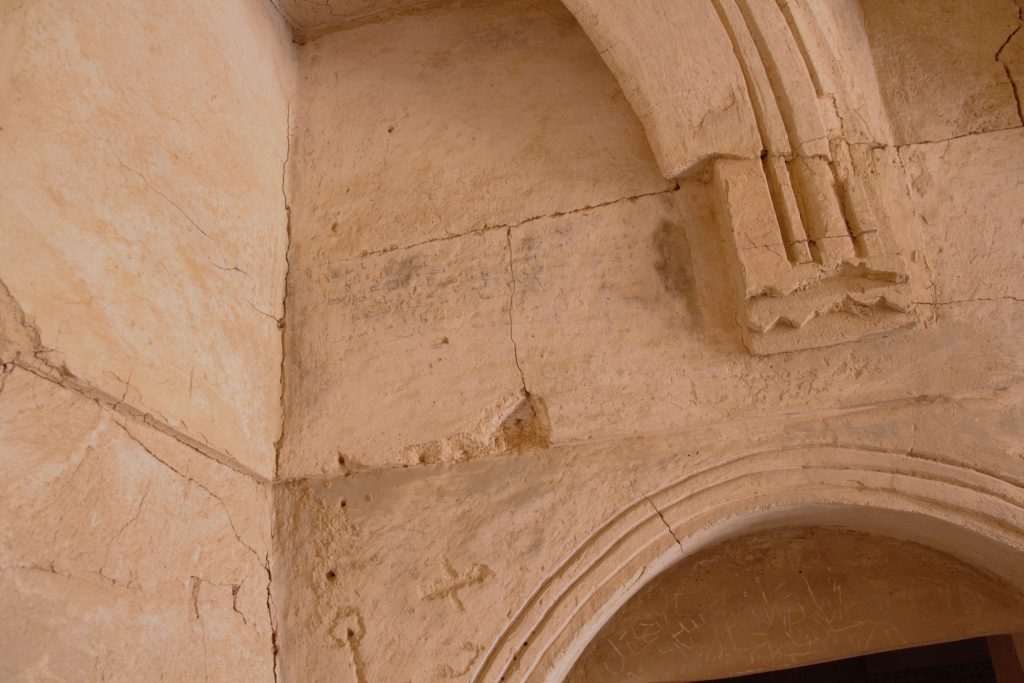 “O God, have mercy on ʿAbd al-Malik ibn ʿUmar and forgive him his earlier and later sins and those that he made public and kept secret and those that You know best; he … if you do not forgive me and have mercy on me, I will be among the losers [Quran 11:47]; my Lord, You bestow benefactions upon me, for You are certainly the Benefactor; and You have mercy on me, for You are certainly the Merciful; I ask You that You accept from him his supplication and prayer; amen, Lord of the world, Lord of Moses and Aaron [Quran 26:47-48]; may God have mercy on who recites it [the inscription] and then says, ‘amen, amen, Lord …, the Mighty, the Great’; and ʿAbd al-Malik ibn ʿUmar wrote [this inscription] on Monday, al-Muḥarram 27, in the year ninety-two.”
[AH = November 24, 710 CE]

The writer asks God to forgive his sins and have mercy on him, among other things. The inscription contains some Qur’anic quotations and adaptations (referring to Qur’an 11:47 and 26:47–48), but apart from that there is nothing we might call Islamic identity signaling (and even the Qur’anic passages cited do not include anything that would not be acceptable to Jews and Christians). The writer does not mention the Prophet Muhammad, but instead refers to Moses and Aaron, figures that are venerated by Jews and Christians too.

All in all, the epigraphic record, complimented with other contemporary evidence, show us that the Muslim affiliation came together around one hundred years after the death of the Prophet Muhammad through the construction of perceived shared ideology, social history, scripture, practices, and other common features. It should also be noted that Muslims were, for many centuries, a minority group in the Near East, conversion to Islam being very slow.

The issues of religious categorizations, inter-religious dialogue, and pluralism have been revisited in the modern era by many Muslim scholars. There is an ample literature on these questions. To mention one example, Jerusha Lamptey’s book Never Wholly Other: A Muslima Theology of Religious Pluralism (2014) tackles the question of religious categorizations head-on. She offers an insightful reading of the Qur’an that is in agreement with the idea of pluralism, suggesting that according to the Qur’anic categorizations the differences between religious groups are lateral rather than hierarchical.

She notes (p. 165) that “all revelation and messengers share a common goal of teaching people about God, of guiding them to correct practice, and of warning them of individual accountability and the Day of Judgment.” Since the Qur’an rarely mentions the Prophet Muhammad by name and more often simply talks of a messenger (rasūl) or the messenger (al-rasūl), Lamptey (p. 250) interprets that “in the Qurʾān all people are called to obey a messenger but they are not all called to obey the same messenger.”

Social categorizations are subject to change, if need be, as well as to social and historical context. Fred Donner has put forward a bold and intriguing hypothesis as to how early Islamic identity was articulated and established. In my article, I suggest that the evidence of Arabic inscriptions and social psychological analysis agree with the claims of Donner’s studies. This line of research requires naturally more probing and refining and comparisons with Arabic literature (which is, however, not contemporary but later). An increasing number of Arabic inscriptions and papyri, for example, are published every year, and scholars must take them into account. Furthermore, the studies on early Islamic identity that have been carried out so far do not discuss geographical and other contexts in detail. It is to be supposed that social categorizations functioned in divergent ways in different regions and environment. Hopefully, with more sources available, it will be possible to study the makings of Islamic identities in all of their variety.