In 2017, Josephine Hoegaerts received good news. Being a Core Fellow at HCAS at the time, she would be able to stay in Helsinki with her ERC project “CALLIOPE: Vocal Articulations of Parliamentary Identity and Empire”, which she conceived at HCAS. We had a conversation about the impact of the HCAS Fellowship on her career and about tensions inherent in her current role as a Principal Investigator, who sets the research agenda not only for herself but also for others. 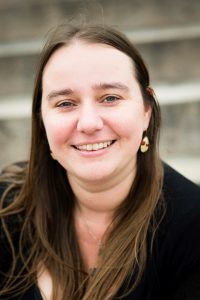 “It was a deeply uninformed decision”, says Josephine Hoegaerts and laughs, when asked about her reasons for coming to HCAS in 2015 to work on a postdoctoral project on the history of voice, after her first postdoc in Belgium. Hoegaerts now holds a position as Associate Professor at the Department of Cultures at the University of Helsinki, but back then she did not know much about the University of Helsinki or about Finland. But, in addition to the prospect of learning a completely new language, Finnish, she was attracted to Helsinki by the opportunity to do research in the interdisciplinary and international environment of HCAS.

Hoegaerts turned down another postdoc in Germany connected to an archive of popular music, which would have directed her work more specifically towards musicology. The Core Fellowship at HCAS gave her the time and freedom to step back and look for a wider interdisciplinary framework.

“I was trying to get out of strictly doing history, and into interacting with musicology, sound studies, literary studies, and HCAS seemed like an environment in which people would let me get on with that.”

It turned out that HCAS was an excellent environment for shifting gears as a researcher. Hoegaerts found that she could engage with people from different fields in a particularly meaningful way.

“My postdoc project was on history of voice but was mainly looking at educational scientific manuals. It had a very specific, history of science approach. I was looking to pull it more in a political and social direction. At HCAS I had the time to attend different reading groups with people from different disciplines, reading up on stuff that I otherwise would not have planned.”

Many of Hoegaerts’ collaborations at the Collegium began by chance, at lunch discussions with colleagues, whose work resonated in interesting ways with her own. One of these discussions led to the symposium “Embodiment and Emancipation,” co- organized with political philosopher Leszek Koczanowicz and literary scholar Ulrika Maude. Another HCAS Symposium “Writing Voice and Speaking Text” was a collaboration with Mari Wiklund, French philologist specializing on prosody and university lecturer at the University of Helsinki, with whom Hoegaerts is now co-editing a publication.

Hoegaerts also stresses the impact of the collegial and supportive atmosphere of HCAS. The career phase after the PhD is plagued by insecurities that, in her view, are related less to the content of one’s research than to institutional conditions. She found it rewarding to be constantly challenged in terms of content, as fellows from various disciplines posed questions about the very foundations of her project. The same people, however, were extremely supportive as colleagues.

“When I arrived at HCAS, there was a large group of youngish female postdocs, six or seven of us, very much in the same situation, going for sushi every week, complaining. But we were not competing for the same jobs, which meant that if you got a grant or if you got something published, everything was celebrated. There was this enormously supportive atmosphere.”

Hoegaerts also praises the director Sari Kivistö and other HCAS administrators of the time, who were well prepared to assist researchers coming to work in a new country. She remarks that support structures for international researchers are too often lacking in other units of the university, especially after the centralization of the administrative services. There is nobody in her current unit responsible for answering questions about the structure of the MA program or the Finnish tax system, for instance. As a new employee coming from abroad, you do not initially even know which questions you should be asking, she adds.

But what made Josephine Hoegaerts decide to stay in Helsinki, when she could have taken her coveted ERC funding to another European university?

“A sense of loyalty,” she says. “I had been supported really well by the funding services as well as by the Collegium.”

She was also simply tired of moving, a sentiment shared by many early-career academics. And finally, University of Helsinki offered her career opportunities that were not available everywhere: a tenure-track professorship.

Curiosity-driven research for the lucky few?

When Hoegaerts thinks back to her career path, she cannot help but notice a contradiction in her current position as a Principal Investigator of an ERC project, who employs PhD students and postdocs. While she herself has always been able to find funding that does not limit scholars’ freedom to set their own research agendas, she is now, in a sense, forced to limit the freedom of others.

“I get the impression that particularly at the postdoc stage, it is becoming more and more difficult to find a place that is not within a project. At the same time, there is a demand for people to be autonomous, and this is a very odd tension.”

In her own career, the freedom to set one’s own agenda meant that she could come to her current research on citizenship, political influence, and empire from an unusual angle: through thinking about voice and sound.

“It takes time to build confidence, particularly as a woman in academia, to want to talk about politics. Five years ago, I definitely would not have felt I could say anything about citizenship. I was doing something quite weird, and I am still doing something weird, but I am now moving in a direction that could be considered a ‘big and important topic’. I feel that this was a better way of coming to such topics than being in a project, in which you are forced to think about big issues.”

Hoegaerts finds it problematic, particularly in the humanities, that research is now so strongly connected to projects, in which resources are concentrated around a few PIs. The researchers employed by the PIs do not get to define their research focus freely, which makes it difficult for them to build a career.

“The idea behind this is that they want us to be more collaborative. But I am not sure that is the result, because collaboration should be more horizontal than what we have now. There seems to be a growing gap, at least to a degree, between the haves and the have-nots. A few people are lucky at some point and start to get money and get to define the research agenda to a much larger degree than is perhaps necessary.”

Hoegaerts wants to make sure she supports the people employed in her project in a way that brings them forward in their own careers. At the same time, she is held accountable to the ERC to stay within the limits she “defined one summer in Helsinki,” as she puts it.

She is currently planning a new research project that tackles the problem of professionalization and the notion of excellence, taking a critical view on the frequent talk about the latter. She adds, smiling, that this effectively means that she is asking funding agencies to give her money so that her team can tell them why their whole rationale is wrong.

Those lunches and coffees

When asked what it means now for her to be a Collegium alumna, Hoegaerts says that there definitely is a “bizarre bond” between people who have been at the Collegium. As for how this has come about, we – as so often when talking to fellows of institutes of advanced study – come back to how shared lunches build a sense of community and spark bottom-up forms of academic collaboration.

“This is the one thing I really miss from the Collegium”, Hoegaerts confesses. 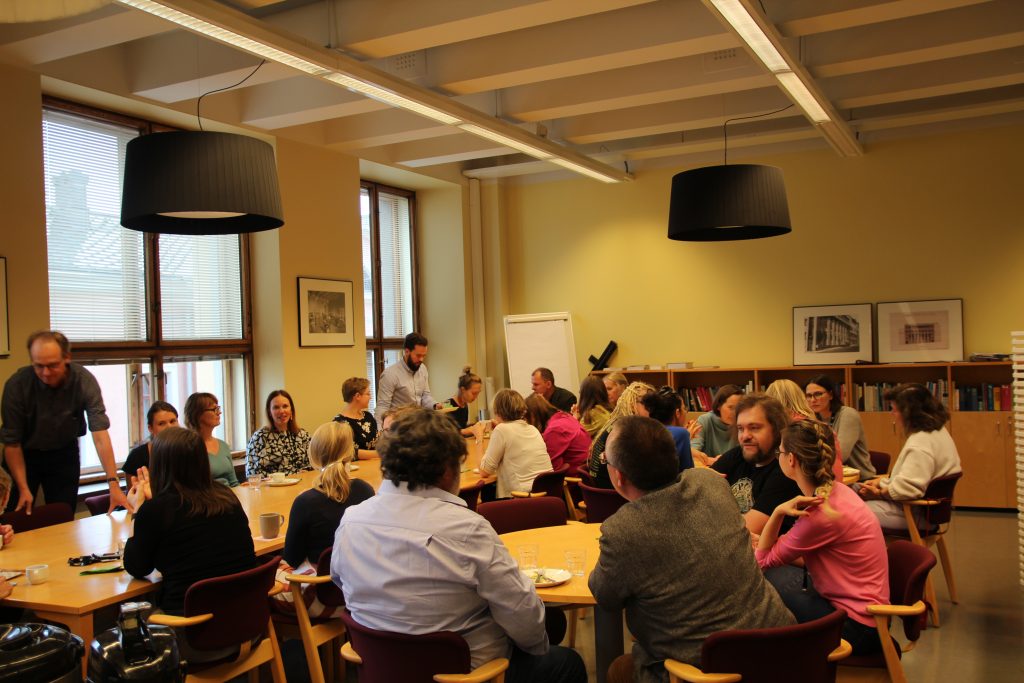 HCAS Fellows at lunch during Orientation Week in early September 2019.