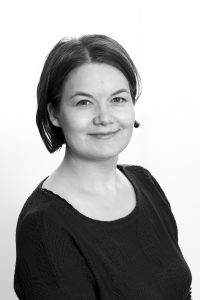 I am a post doctoral researcher in economic and social history at the department of political and economic studies at the University of Helsinki.

My ongoing research project deals with ready-to-wear industry in the 20th century Sweden and Finland. I have special focus on industry-owner’s networks in two urban areas Gothenburg and Borås on West of Sweden, and Helsinki and the surrounding metropolitan area in Finland.

This is a comparative, historical analysis of entrepreneurial networks in the garment manufacturing industry. In the urban history of industrialization the low-paid, subcontracted garment manufacturing sweatshops are typically the very first signs of industrial takeoff. Given the significant role clusters of small, competing sweatshops had during the industrial period, the history of ready-to-wear manufacturing has gone unremarked by economic historians. My study aims to fill this gap in the Nordic context. It covers the 20th century and the rise, heyday and decline of garment districts in two major industrial cities: Helsinki, in Finland and Gothenburg, In Sweden.

In the garment industry employees are, and have been, typically immigrants and females with limited access to good jobs. However, this is a field of business with low barriers to entry. Hence boundaries between employment, self-employment and entrepreneurship are fluid. I will ask questions and apply some of the analytical tools that are normally used in the studies of immigrant and ethnic entrepreneurship, such as examining family relations. However, instead of analyzing certain, selected group of people, I will apply concepts to all business-owners in the ready-to-wear industry. I suggest that by so doing, the distinction between “community-based” networks and “modern” networks become difficult to distinguish; the line between family business and ethnic entrepreneurship appears as blurred. This finding may contribute significantly to the literature on ethnic entrepreneurship and to debates on family business.

I have outlined the study on four ways: 1) a long time span, 2) the focus on a field of business where firms are typically small, 3) to make a transnational comparison, and 4) to focus on a local, urban level. The project starts by collecting a quantitative dataset on garment manufacturers in the two cities between 1930s and 1990s. This is done by combining industrial statistics, arts and crafts statistics, and business censuses. The points of interest in the dataset are the numbers of companies and their size in terms of personnel, turnover, financial figures, employed vs. members of owning families, white-collar/blue collar employees, etc. This quantitative dataset will give a reliable background for the selection of the qualitative research analysis where the units of interest are the actual apparel and clothing manufacturing companies, their employees and their owners in the two cities. The sampling is done by applying the so-called snowball sampling method to historical data.

The project is funded by the Academy of Finland (Sept 2015 to August 2018). I have also received funds from Kone Foundation, Adlerbertsta stifles (in Sweden), City of Helsinki and Marcus Wallenberg stiftelese (in Finland).

I received my doctorate in 2013.  My doctoral dissertation was about the history of the Helsinki Jewish community.