Risto Uro, Ritual and Christian Beginnings: A Socio-Cognitive Analysis. Oxford: Oxford University Press 2016. NOW RELEASED!
The rise of early Christianity has been examined from a myriad of perspectives, but until recently ritual has been a neglected topic. Ritual and Christian Beginnings: A Socio-Cognitive Analysis argues that ritual theory is indispensable for the study of Christian beginnings. It also makes a strong case for the application of theories and insights from the Cognitive Science of Religion, a field that has established itself as a vigorous movement in Religious Studies over the past two decades. Risto Uro develops a ‘socio-cognitive’ approach to the study of early Christian rituals, seeking to integrate a social-level analysis with findings from the cognitive and evolutionary sciences.

Ritual and Christian Beginnings provides an overview of how ritual has been approached in previous scholarship, including reasons for its neglect, and introduces the reader to the emerging fields of Ritual Studies and the Cognitive Science of Religion. In particular, it explores the ways in which cognitive theories of ritual can shed new light on issues discussed by early Christian scholars, and opens up new questions and avenues for further research. The socio-cognitive approach to ritual is applied to a number of test cases, including John the Baptist, the ritual healing practiced by Jesus and the early Christians, the social life of Pauline Christianity, and the development of early Christian baptismal practices. The analysis creates building blocks for a new account of Christian beginnings, highlighting the role of ritual innovation, cooperative signalling, and the importance of bodily actions for the generation and transmission of religious knowledge.

István Czachesz & Risto Uro (eds.), Mind, Morality, and Magic: Cognitive Science Approaches in Biblical Studies. Durham: Acumen. A comprehensive volume on the application of cognitive science to biblical materials. The cognitive science of religion that has emerged over the last twenty years is a multidisciplinary field that often challenges established theories in anthropology and comparative religion. This new approach raises many questions for biblical studies as well. What are the cross-cultural cognitive mechanisms which explain the transmission of biblical texts? How did the local and particular cultural traditions of ancient Israel and early Christianity develop? What does the embodied and socially embedded nature of the human mind imply for the exegesis of biblical texts? Mind, Morality and Magic draws on a range of approaches to the study of the human mind – including memory studies, computer modeling, cognitive theories of ritual, social cognition, evolutionary psychology, biology of emotions, and research on religious experience. The volume explores how cognitive approaches to religion can shed light on classical concerns in biblical scholarship – such as the transmission of traditions, ritual and magic, and ethics – as well as uncover new questions and offer new methodologies.

Read a free sample including the introduction here. 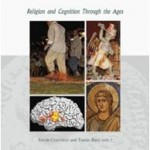 István Czachesz & Tamas Biró, Támas (eds.), Changing Minds: Religion and Cognition through the Ages. Leuven: Peeters 2011.
This volume addresses the problem of change and continuity in religious traditions from the perspective of cognitive science. Relying on the rapidly growing body of scientific knowledge about the human mind, the authors examine cross-culturally recurrent religious phenomena and specific reli-gious traditions, in an attempt to explain why religions change dynamically whilst still exhibiting high degrees of continuity. The volume contributes to our understanding of how social and cultural phenomena emerge from mental processes taking place in the brains of many individuals. The volume is the result of the International Workshop on Religion and Cognition, co-organised by the Cultural Change programme and the Centre for Religion and Cognition at the University of Groningen in 2006. 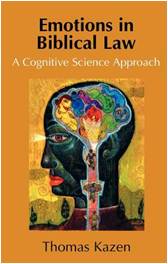 Thomas Kazen, Emotions in Biblical Law: A Cognitive Science Approach. Hebrew Bible Monographs 36. Sheffield: Sheffield Phoenix Press 2011.
This study pioneers the use of insights from cognitive sciences, such as evolutionary biology, neuroscience, and developmental psychology, as heuristic tools for interpreting ancient texts. The approach could be described as ‘psycho-biological’. The focus is on emotions in the various Pentateuchal legal collections. Kazen discusses the role of disgust, empathy, fear, and a sense of justice, for particular moral and ritual issues: purity and holiness; humanitarian concern for vulnerable categories; ethnocentrism and xenophobia; divine punishment and demonic threat; revenge, compensation, and ransom (kofer), together with removal (kipper) rites. Read more. 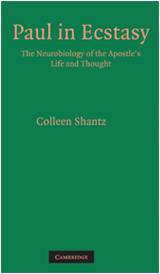 Colleen Shantz, Paul in Ecstasy: The Neurobiology of the Apostle’s Life and Thought. Cambridge: Cambridge University Press2009.
While many readers of Paul’s letters recognize how important his experience was to his life and thought, Biblical scholars have not generally addressed this topic head-on. Colleen Shantz argues that they have been held back both by a bias against religious ecstasy and by the limits of the Biblical texts: How do you responsibly access someone else’s experience, particularly experience as unusual and debated as religious ecstasy? And how do you account responsibly for the role of experience in that person’s thought? Paul in Ecstasy pursues these questions through a variety of disciplines – most notably neuroscience. This study provides cogent explanations for bewildering passages in Paul’s letters, outlines a much greater influence of such experience in Paul’s life and letters, and points to its importance in Christian origins. Read more. 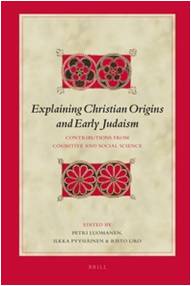 Petri Luomanen, Ilkka Pyysiäinen, & Risto Uro (eds.), Explaining Christian Origins and Early Judaism: Contributions from Cognitive and Social Science. Biblical Interpretation Series 89. Leiden: Brill2007. Cognitive science of religion is a radically new paradigm in the study of religion. Apart from psychology and anthropology of religion, also historians of religion have shown increasing interest in this approach. This volume is groundbreaking in combining cognitive analysis with historical and social-scientific approaches to biblical materials, Christian origins, and early Judaism. The book is in four parts: an introduction to cognitive and social-scientific approaches, applications of cognitive science, applications of conceptual blending theory, and applications of socio-cognitive analyses. The book will be of interest for historians of religion, biblical scholars, and those working in the cognitive science of religion.