Getting acquainted with a rich collection of articles on the historical urban landscape, its preservation and development: Francesco Bandarin’s and Ron van Oers’s (eds.) Reconnecting the City. The Historic Urban Landscape Approach and the Future of Urban Heritage (2014). 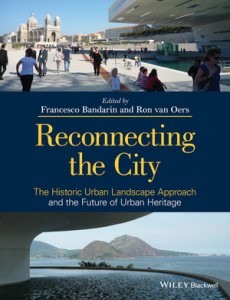 The importance of a rigorous cultural mapping to understand the city’s many layers of meaning is one of the things rightly foregrounded in this volume.

And an interesting (and rare) warning about using GIS: GIS-based mapping “is useful for coordinating visual data and capturing the visual morphology of the city, but has its limitations when recording the urban experience” according to Julian Smith who has a few critical words for “modernist assumptions about mapping and documentation” in this volume (p. 224). Food for thought for the emerging GIS-enthusiasm in literary studies (see my earlier post here).

From the little I’ve seen of the volume so far, nevertheless, there are some points of view I would’ve like to see more of in a book like this. One is the potential of literary sources for a cultural or narrative mapping of place. A second one is the importance of resilient, everyday practices that give meaning to place, and that are so hard to pinpoint in urban heritage discourse. How to preserve and foster everyday spontaneity, in its many forms? And is preservation even desirable? One of the things that came up in the work I conducted with Sirpa Tani on parkour (see here), in particular in our article “Parkour: Creating Loose Spaces?”.

In view of this second comment, I’m increasingly looking forward to reading the upcoming book by Oliver Mould (a fellow parkour researcher), which promises a counter-narrative to the creative city discourse in the form of new interest in forms of urban subversion.