From 2006 onwards, I have been studying parkour – perhaps one of the most fascinating innovative (urban) ways of moving. Most of the research was conducted together with prof. Sirpa Tani. Our research has resulted in several articles published in Finnish as well as in English. 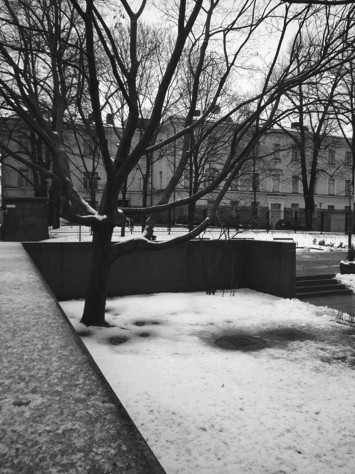 Picture by Sirpa Tani. From our article “Everyday Aesthetics in Action”:

“The university courtyard on the city campus of the University of Helsinki was one of the places mentioned where natural and built elements were connected in an ideal way for parkour. The ‘Deku Tree’ and the concrete walls work well for practising jumps and vaults.”

“Parkour is a spectacular and highly mediatized new way of movement that challenges conceptions of acceptable or appropriate behaviour in urban public space. This article will examine the potential of parkour to “loosen” urban spatial texture by applying recent thinking on loose and tight space by Karen A. Franck and Quentin Stevens to data gathered through in-depth interviews with parkour practitioners (traceurs) in two Finnish cities. When practising in urban public spaces, the traceurs we interviewed often caused confusion among other people. We explore how they negotiate their right to public space in the face of these reactions, either by evasion or with a combination of legal and moral arguments. We argue that parkour is not only a playful and confrontational practice with a potentially subversive character, but that the process of loosening space constitutes a complex dialectic, which may also involve a certain degree of tightening in the public space for other unexpected or unintended activities.”

EVERYDAY AESTHETICS IN ACTION: PARKOUR EYES AND THE BEAUTY OF CONCRETE WALLS

Link to the article here

“Parkour is a physical discipline practised in public and semi-public spaces, most often in urban environments. In this article, the potential of parkour to open up new perspectives on everyday surroundings will be considered. Special attention will be paid to the ways in which practitioners of parkour (traceurs) build unique and highly embodied relationships with their daily space. Emotions that they attach to their environments and their aesthetic appreciation of mundane surroundings will be explored. The interpretations are based on in-depth interviews with traceurs in two cities in Finland, Helsinki and Jyväskylä. For them, the most inspiring environments combine different heights with solid structures that provide a good grip. Concrete is considered the ideal material, and suburban landscapes, which are often thought of as boring or even ugly by other urban dwellers, are highly valued among traceurs. Traceurs speak of ‘parkour eyes’, a specific way of looking; gradually, places which have not previously been seen as attractive or appealing start to reveal interesting details and opportunities for inventive practice. Although parkour does not leave any physical traces on the environment, it has the potential to make mundane environments visible as well as to reveal some of the aesthetic potential imbedded therein. In doing so, parkour questions established ideas of interesting and valuable environments and reassesses the aesthetic values of our everyday environments.”

Link to the full text here.

Link to the full text here.