In 2020 the researchers of the Department of Equine and Small Animal Medicine contributed as authors to 42 international peer-reviewed scholarly publications, with a diverse range of topics from animal health and medical care to animal welfare. A total of 19 licentiate theses and eight bachelor’s theses were completed at the department. In addition, both professional and research-oriented postgraduate degrees were completed at the department.

An X-ray image of a sand accumulation in the large intestine of a horse, visible as a lighter area at the bottom of the abdominal cavity.

Teaching in the shadow of coronavirus

As in many other education institutions, most of our teaching had to be rapidly transferred online in the spring due to the coronavirus pandemic. Creativity was needed in the organisation of the competence tests (OSCE) required for obtaining the right to practise the profession. In the end, they were successfully implemented with the help of remotely arranged assignments, and the students were able to start their summer jobs, filling in as usual for veterinarians taking a summer holiday. At the same time, clinical instruction with patients present continued almost as before, with consideration given to group sizes and social distancing. Remote connections were also used innovatively in clinical instruction to enable as many students as possible to observe procedures carried out on horse and pet patients, with restrictions on the number of people on site.

Our bilingual (Finnish- and Swedish-language) teaching efforts received support, as Emilia Gordin, LVM, and Thomas Grönthal, DVM, received funding from the Anna and Karl Eklund Foundation for promoting the use of Swedish in the clinical education of veterinary students at our department.

After the pause in the spring, the collection of study subjects and samples as well as the activities of the research laboratory were gradually restored in the summer and autumn. Docent Anna Hielm-Björkman, a researcher at the department, contributed to the fight against coronavirus: by the end of the year, coronavirus sniffer dogs trained by her research group had sniffed the samples of more than 4,000 air travellers passing through Helsinki Airport. The dogs have been trained to identify other human diseases as well, including cancer. Hielm-Björkman’s group also investigates the effects of canine diets on health, including the metabolism of healthy and atopic dogs.

Coronavirus dogs at the airport. Anna Hielm-Björkman on the left. (Photo by Egol Björkman)

The Canine Health Foundation of the American Kennel Club awarded a grant to Sari Mölsä, DVM, for research on the necessity of using antibiotics in canine pyometra surgeries. Contributing to the study are the small animal surgery research group and our department’s central laboratory. Several other projects are ongoing at the department, investigating bacterial resistance to antibiotics in horses and small animals as well as the fit-for-purpose use of antibiotics in animals. In addition, our central laboratory took part, as per tradition, in the drafting of the FINRES-Vet report, also reporting the national antimicrobial resistance figures for bacteria associated with companion and hobby animals.

Several parties awarded funding for a study led by Docents Minna Rajamäki and Liisa-Lilja Maula on a silent inflammatory state and respiratory disturbances during sleep potentially linked with a respiratory syndrome in short-muzzled dogs. This is a likely indication of the topic being considered an important subject for research. These issues also have links to human sleep apnoea. The pulmonary research group also boosted the diagnostics of idiopathic pulmonary fibrosis by observing that metalloproteinase enzymes in blood and bronchoalveolar lavages can serve as markers in West Highland White Terriers. This project also obtained grants from several sources.

A joint project carried out by the FIN-SAGAS research group active at our department, Leipzig University and Karolinska Institutet demonstrated that iohexol, an orally administered contrast medium, also exposes changes in intestinal permeability in birds. The study utilised results previously gained from the group’s studies on dogs, cats, rats and mice. 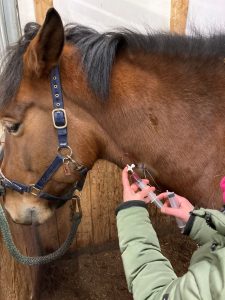 A blood sample is being collected from a horse from a cannula in the jugular vein in a study investigating insulin and glucose concentration in the blood after a glucose tolerance test. The horse was fed corn syrup for test purposes.

The doctoral thesis by Emilia Gordin, LVM, demonstrated that cystatin B and clusterin are promising new biomarkers for the diagnostics of acute canine renal damage. The project has received funding, for example, from the Swedish Cultural Foundation and IDEXX.

The first epileptic dogs taking part in the study led by Tarja Pääkkönen, DVM, and funded by the Academy of Finland on epilepsy biomarkers were examined at the Veterinary Teaching Hospital in May. The project, which is based on multidisciplinary research collaboration, employs a dog seizure model for spontaneously recurrent seizures to identify biomarkers of epilepsy that would be able to predict future disease progression, treatment response and the development of associated diseases.

Anna-Mariam Kiviranta, LVM, is nearing the completion of her doctoral thesis. Her study, funded by the Agria research fund and the Swedish Kennel Club, has demonstrated that the fontanelles in the canine skull are clinically significant. In further studies, the group aims to investigate the development of the skull and skull fontanelles in dogs.

As in previous years, in 2020 the diagnostic imaging unit contributed to both clinical veterinary research projects and studies in human medicine in diverse ways. The projects have made use of a range of diagnostic imaging devices. For example, the effects of the DVL2 gene associated with Robinow syndrome on canine structure was investigated with the help of X-ray and CT images. The research fund of Agria and the Swedish Kennel Club awarded a research grant to a study looking into changes in the intervertebral discs of young adult Dachshunds and their prevalence in X-ray and MRI images.

Anna Boström, PhD, is investigating the internal structure of back muscles in Dachshunds suffering from disc herniation with a grant awarded by the Nylands Nation student association. She also heads a project funded by the Agria research fund and the Swedish Kennel club where Leena Inkilä, LVM, began completing her doctoral thesis on the physical strain on dogs’ muscular and skeletal systems during agility activities.

Heli Hyytiäinen, PhD, continues her studies on the development of physical fitness in young dogs with a clinical researcher grant from the Academy of Finland. Hyytiäinen has also found that a light tail-pull performed by a physiotherapist reduces the amount of pain associated with manipulating the back musculature in horses suffering from back pain. In other words, a specific tail-pull can be a useful additional treatment technique for equine back pain. In addition, Hyytiäinen found that a three-dimensional accelerometer attached to the tail of a foal was a valid method for observing foal motor and lying behaviour. Measuring motor behaviour is an important method of assessing foal welfare and health.

The group headed by Anna Mykkänen, DVM, has collected samples from the airways of asthmatic horses and healthy control subjects for the analysis of several biomarkers for inflammation. The group headed by Ninja Karikoski, DVM, demonstrated that obesity is a risk factor for insulin resistance in the Finnhorse breed as well. In the past year, the group has collected more data for its research on equine energy metabolism and insulin responses.

While on the one hand, the coronavirus year slowed down the care of study subjects and sample collection particularly in the spring, on the other hand, many researchers had more time to process their findings as well as to draw up reports and new applications. In fact, a record number of grant applications were completed at the department in the summer and autumn. I believe that we will, in the coming years, gain many new and interesting observations and research findings that will improve the health and welfare of horses and small animals.