the newest issue of Suomen Antropologi, The Journal of the Finnish Anthropological society is out. This issue is a special issue guest edited by Maria-Liisa Honkasalo (University of Helsinki) titled “How Does Vulnerability Matter?”.

In addition to Marja-Liisa Honkasalo’s introductory article titled “Vulnerability and Inquiring into Relationality”, the issue includes five articles, one research report and one essay.

INTERNATIONAL CONFERENCE: HOW DOES VULNERABILITY MATTER? 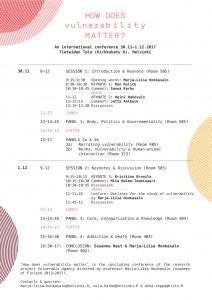 International conference organized in Helsinki 30.11.-1.12.2017 at The House of Science and Letters by the Research project Vulnerable Agency (Academy of Finland 2012-2017) directed by professor Marja-Liisa Honkasalo in collaboration with the Finnish Anthropological Society. SEND ALL QUERIES TO marja-liisa.honkasalo@helsinki.fi & anna.leppo@krits.fi & miia.halme@helsinki.fi

During the last decade, studies on vulnerability have increased enormously. When we started our research in 2012, vulnerability was a novel approach to studying agency – one of the most central concepts of sociology. Our aims were to 1) critically scrutinize the idea of ‘free choice’ from the point of view of health and illness; in this context agency is inescapably embedded – and vulnerable; 2) conduct ethnography among extremely vulnerable lives: the elderly in deficient home-care settings, people with serious drug addictions and people with technologically improved bodies and replaced body parts and, finally, 3) scrutinize the implications of vulnerability on agency and ask how vulnerability generates social ties and networks.

Today the concept of vulnerability is vital in critical discussions on the limits of ‘freedom’ and ‘free choice’ –  both central slogans in the increasing privatization of the health care market, occurring in Finland as elsewhere.

Vulnerability has been widely used as a descriptive concept in the study of fragile life situations, socially excluded people and minorities and, e.g. dependent human beings and animals. However, this articulation of the concept has been criticized for being human-centered. The concept can also have a normative character, which refers to biological life, especially climate change and non-human lives. In a normative sense and from a Foucauldian take on productivity, vulnerability in current neo-liberal societies can also be understood as a vehicle for individualization and identity politics. Vulnerability has also been used as an ontological concept, a necessary feature of the human condition. This is probably the oldest meaning of vulnerability which has been extensively discussed e.g. in religious and ethical settings. When studying current societies, vulnerability as an ontological concept is frequently modified to serve political ends.

“This seminar examines the range of definitions that vulnerability is given today. Does vulnerability matter – how? With increasingly broad articulations of the term,  is it in the danger of losing its meaning? What kind of common denominators do the various articulations share? How can researchers of vulnerability communicate with one another?”

In addition, we invite papers, which discuss materiality, affects and mediations between social relations and the politics of vulnerability. We invite participants from all relevant subjects, such as social sciences, humanities and the arts, philosophy and medicine.

Conference is arranged by the Academy of Finland research project ‘Vulnerable lives’ (2013-2017), in collaboration with the Finnish Anthropological Society.

INTRODUCTION: Marja-Liisa Honkasalo, Professor of Culture, Health and Well Being,  University of Turku

Since the demise in the 1980s of research by psychologists that attempted to teach human language to apes, a range of other perspectives have arisen that explore how humans can communicate with animals and what the possibility of such communication means. Sociologists interested in symbolic interactionism, anthropologists writing about ontology, equestrian and canine trainers, people with autism who say they understand animals because they think like animals, and a ragbag of sundry New Age women who claim to be able to converse with animals through telepathy have started discussing human-animal communication in ways that recast the whole point of thinking about it.

I will chart how interest in human-animal communication has moved from a concern with cognition to a concern with ethics, and I will discuss the similarities and differences that exist among the range of writing on this topic.

Don Kulick is Distinguished University Professor of Anthropology at Uppsala University in Sweden, where he directs a large research program titled “Engaging Vulnerability”. He has conducted long-term fieldwork in Papua New Guinea, Brazil, and Scandinavia, and has published in a number of fields, including linguistic anthropology, sexuality and gender studies, and disability studies. His books include Travesti: sex, gender and culture among Brazilian transgendered prostitutes (1998); Taboo: sex, gender and erotic subjectivity in anthropological fieldwork (1995; with M Willson); Fat: the anthropology of an obsession (2005, with A Meneley); Language and Sexuality (2003, with D Cameron); Loneliness and its Opposite: sex, disability and the ethics of engagement (2015, with J Rydström), and most recently, The End: adventures with a dying language.

KRISTIINA BRUNILA: The ethos of vulnerability and the rise of psy-subjectivity

In the ethos of vulnerability tendency seems to be towards psycho-emotional vulnerabilities encompassing subjects that can be known and spoken about. More and more people are drawn into the sphere of an expanded agenda of psycho-emotional risks that no longer targets just specific groups but, increasingly, anyone. The ethos of vulnerability has come to play an increasingly decisive role in shaping cross-sectoral policies and educational practices.

In this presentation I consider some implications of  ‘vulnerabilizisation’ in the field of education, which is a field currently thoroughly affected by neoliberalism.

Kristiina Brunila works as a professor (tenure track) of social justice and equality in education in the AGORA for the social justice and equality in education -research centre, University of Helsinki. Her research group publishes widely related to policies and practices of education, social justice, governance, power, differences and agency. This conference presentation builds on the work done in previous research project Youth on the Move. Revisiting the vulnerability ethos in the era of market-oriented education (2014-2017) and in the on-going project Interrupting youth support systems in the ethos of vulnerability (2017-2021), both led by prof. (tenure track) Kristiina Brunila.

This paper discusses vulnerability as a context-specific function of social relationships and societal structures, with tuberculosis as the historical example. For the first part of the 20th century, tuberculosis was a leading cause of death in Finland, and it remained a public health problem until the 1970s. The disease affected both adults, children and infants. A multisystemic infectious disease with protean manifestations, tuberculosis makes the individual body vulnerable at several points. Prior to the introduction of effective and affordable chemotherapeutics (1950-60), a tuberculosis diagnosis would signify a major break in the life course of an individual even if s/he survived the disease. A central function of 20th-century popular tuberculosis education, or “propaganda” in the parlance of the day, was to make people aware of their vulnerability to the disease and thereby more susceptible to expert advice.

This conference paper focuses on vulnerability as a social and societal issue. It discusses vulnerability and instability that tuberculosis introduced into social relationships (especially family relationships) and asks how the social and economic structures characteristic of 20th-century Finland made social relationship more susceptible or, alternatively, more resistant to the disruptive effect of a disease like tuberculosis.

Marja-Liisa Honkasalo is a medical doctor and an anthropologist who in her research examines diverse articulations of the enigmatic relationship between nature and culture. This inquiry has articulated itself via numerous ethnographic domains: most notably illness, the body and death, as well as the cultural meanings of women’s symptoms, the phenomenology of the body and experience of chronic pain. Her research departs from the realisation that in contemporary societies the body is conceptualised more as an artifact and less as natural than ever before. She argues that the body and its illnesses are “done” by a variety of cultural practices, including medical technology, and that in order to open the concept of “doing”, we need a theoretical apparatus elaborated from Science and Technology Studies as well as from what is called “new materialism”.

Before joining the University of Turku in 2011, she worked as Professor of Medical anthropology at the University of Linköping, Sweden (since 2006). She has been a visiting scholar at Harvard University, and visiting Professor at Università degli Studi di Roma, La Sapienza (Italy). In 2010 she was awarded with the internationally distinguished Steve Polgar Professional Prize, for the article “Grips and Ties. Agency, Uncertainty and Suffering in North Karelia.” She is Docent in Medical anthropology as well as in Sociology at the University of Helsinki, and has been the director of numerous large research projects by the Academy of Finland, among them ‘Multicultural communication in health care’, ‘Vulnerable Agency’, and ‘Mind and the Other’. Her most recent book is the Finnish anthology ‘Mielen rajoilla: arjen kummat kokemukset’ (SKS 2017). 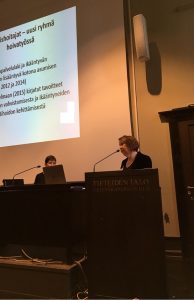 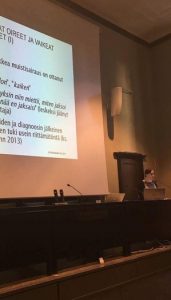