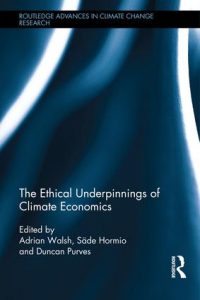 The Ethical Underpinnings of Climate Economics, published as part of the Routledge Advances in Climate Change Research series, brings together scholars from ethical theory and economics to explore the interrelation between the disciplines with regards to climate change. Examining a wide range of topics including conceptions of value, sustainability, risk management and the monetization of harm, the book explores the ethical limitations of economic analysis, but does not assume that economic theory cannot accommodate the concerns raised. The aim in part is to identify ethical shortcomings of economic analysis and to propose solutions. Given the on-going role of economics in government thinking on mitigation, a constructive approach is vital if we are to deal adequately with climate change.

The edited volume was born out of two interdisciplinary workshops attended by both philosophers and economists, one of them held in Helsinki in November 2014 as part of the Climate Ethics and Economics project.

The writers explore the ethical underpinnings of climate economics as part of a larger and more long-term project of ensuring that economic theory is capable of meeting the challenges associated with climate change. More modestly, this book begins to outline the conditions under which the discipline of economics is capable of playing a positive and significant role in the response to climate change.

There are good reasons for doing so. The first of these is simply a matter of realpolitik. The political reality is that economic theory and economic analysis will continue to be highly influential in political decision-making for the foreseeable future. Given that fact we need to ensure that the economic analysis, as employed by policymakers, is able both to recognize and to accommodate the moral demands that an adequate response to climate change must address.

Second, as a number of authors in the volume note, economics has much to offer in terms of our understanding of the nature of the problems that face us and in terms of how best to respond. Questions of economic efficiency for instance are vital in determining the correct course of action when faced with a range of possible paths in the use of social resources. Equally, economic solutions to coordination problems have often been highly successful when employed in a range of social situations. As John Broome notes economic theory “provides essential tools” for thinking about how to respond to climate change.

There are important and daunting ethical challenges that climate change raises for economic theory in general. In order to deal with those, economists need to think more carefully about the ethical underpinnings of their discipline. This volume is thus partly a call for greater dialogue between philosophers and economists to ensure that the climate economics we use is “fit for purpose”.

The book is out now.