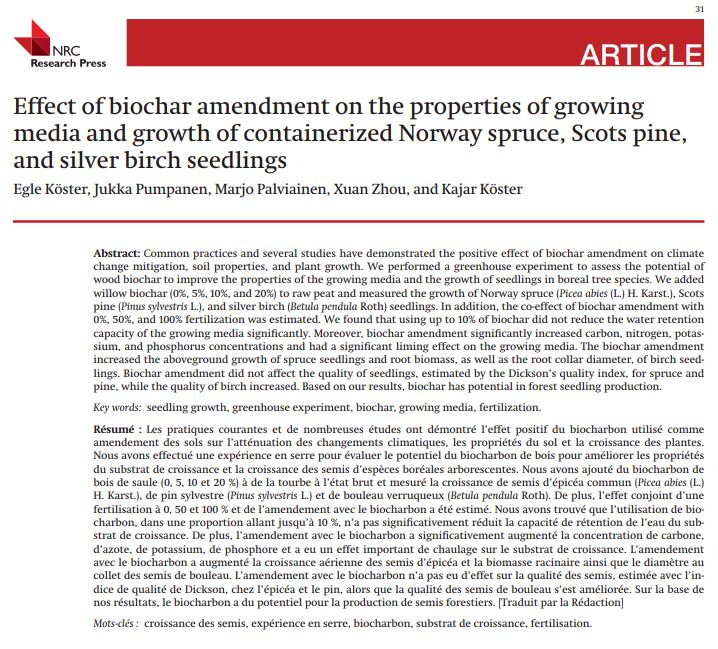 The main purpose of the study was to develop and test novel substrates in which to grow forest tree seedlings in nurseries. We studied the impact of added wood biochar on the properties of the growing media and on the growth of Scots pine, Norway spruce, and silver birch seedlings. Speciﬁcally, we aimed to test and estimate the optimal amount of biochar to be added to the growing media to obtain the maximal growth of tree seedlings. Additionally, subtreatments of fertilization were done to test the interaction of biochar amendment and fertilization (biochar x fertilization).

We found that biochar amendment slightly reduced the soil water retention of the growing media due to the high water-holding capacity of raw peat. Due to its alkaline character, biochar had a signiﬁcantliming effect and could replace other liming components in the growing media. In addition, biochar amendment had a signiﬁcant effect on the nutrient concentration of the growing media,as it signiﬁcantly increased the concentrations of all analysed nutrients (C, N, P, and K). Biochar affected the aboveground growth of spruce and pine seedlings and increased the root dry mass and diameter of birch seedlings. Fertilization improved the quality of seedlings, measured by DQI. We also observed no variation in DQI values for 50% and 100% fertilized seedlings, which suggests that the use of fertilizers could be reduced with biochar amendment. Adding up to 20% biochar for spruce, pine, and birch did not reduce overall seedling performance when fertilization was used. We can conclude that biochar could be used as a peat additive in the nursery production of tree seedlings. The results suggest that the growing media could be amended with 20% biochar for spruce and 10% biochar for pine and birch seedlings.