Jelena Obradovic-Wochnik, a recurrent visitor at the Aleksanteri Institute, was introduced as Face of the Month in Aleksanteri News 2/2008 as the first scholar to participate in the now well-established Aleksanteri Institute Visiting Scholars Programme. In 2008 she had just defended her PhD thesis on victimhood discourse and denial of war crimes in Serbia. 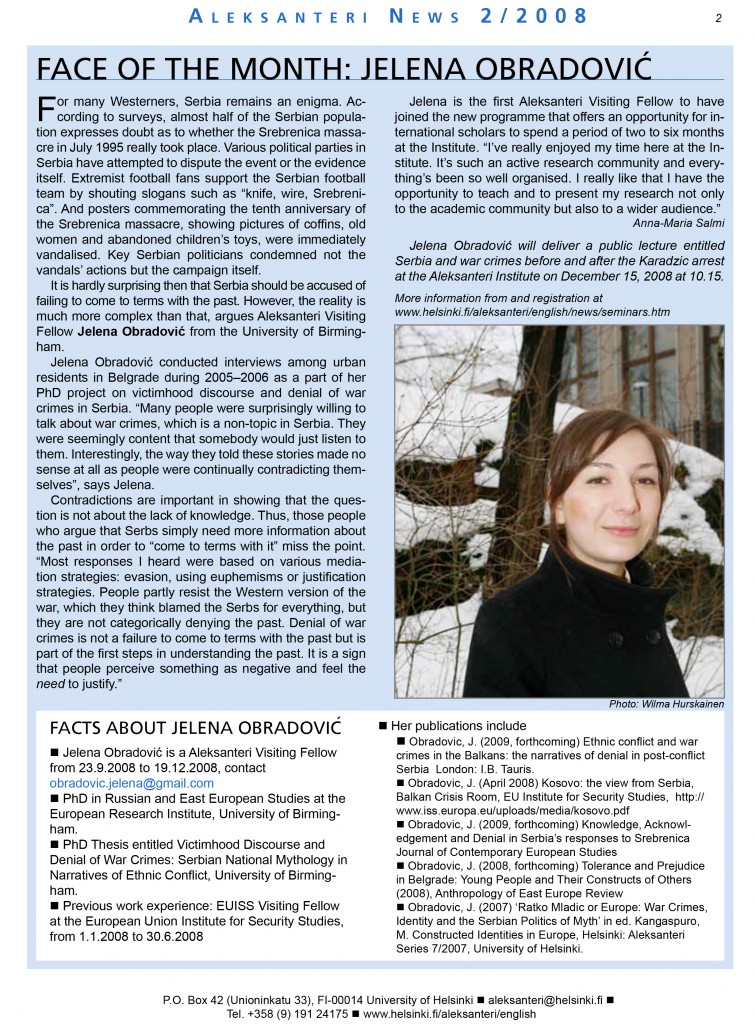 “When I first came to the Aleksanteri Institute, Serbia was in a very dark place: it still hadn’t met all of its obligations to the International Criminal Court for the Former Yugoslavia (ICTY), and its EU integration prospects looked very poor. There was little political progress, unemployment was high and young people had few opportunities”, says Jelena. “Today things look different: Serbia is an EU candidate, there is increased investment and lots of economic activity. On the other hand, the old networks still dominate both in politics and business, unemployment is extremely high and people have little faith in the government.“

Jelena has found her academic home at the Aston University, where she holds the positions of Lecturer in Politics and International Relations and Deputy Director of Aston Centre for Europe. Happily, she also maintains close ties with the Aleksanteri Institute. “Each time it has been absolutely fantastic to work here. The institute provides a rich intellectual environment, as there are people here working on cutting-edge projects”. Jelena can next be seen in Helsinki at the end of May, discussing new collaboration with Aleksanteri researchers on the idea of civil society in the Western Balkans.

Go for a free ride in our time machine – read the Face of the Month story by Anna-Maria Salmi first published in Aleksanteri News 2/2008!