During the ongoing summer, the staff of Minority Languages Project at the National Library of Finland has been fully employed in making the digitized items more available and usable for the public. One of the tasks has been the transcription of Romani word list of Henrik August Reinholm from the 19th century. The transcription is now openly available at the Fenno-Ugrica collection.

Reinholm’s Romani language manuscript consists of 73 digitized text pages, most of which include two sides. Reinholm’s material is a Romani-Finnish/Finnish-Romani language data, a kind of “word list”, more or less in an alphabetical order. Reinholm collected not only single words but also expressions and sentences.

One theme which is visible through out Reinholm’s manuscript is religion, Christianity. There are expressions and sentences reminding or probably borrowed from prayers. The collected data might give to the sharp-eyed an idea about the 19th century’s Finnish Romani culture and possibly also a remote idea about Finland of that time. One thing is clear: even though a hundred years is not necessarily a long period in the life span of a language, Reinholm’s material is among other things a good demonstration of how languages – in this case Romani and Finnish – can change through time.

The manuscript has now been transported into Excel. The Excel version could be called “raw” material, since it is almost an exact representation of the original Reinholm. Reinholm’s repetitions, question and exclamation marks, brackets and quotation marks with missing parts are present in the Excel. Only Reinholm’s crossed-over entries have been dismissed. 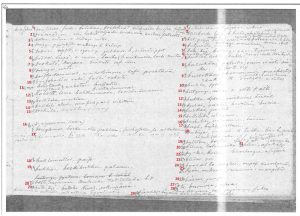 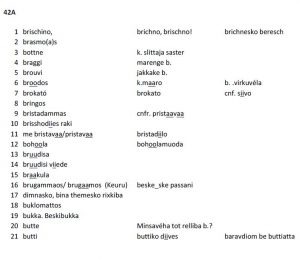 This “raw” material is 1) a good source for further exploration and extraction of Finland’s Romani language word-lists for various purposes and 2) an interesting example of how a linguistic data collection task could be and in fact was carried out in the 19th century (Finland), providing a view on the cultural and scientific thinking of the time.

The text and transcription was written and complied by Armine Barseghyan

For additional information or enquiries, please, contact us by e-mail: kk-fennougrica@helsinki.fi