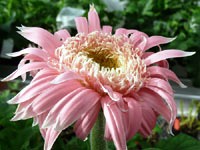 Our studies on chalcone synthase (CHS) -like genes have revealed at least three distinct genetic programs that are active during organ differentiation in gerbera. GCHS1 and GCHS3 code for typical CHS enzymes, and their gene expression pattern temporally correlates with flavonol (GCHS1, GCHS3) and anthocyanin (GCHS1) synthesis during corolla development. GCHS2 is different. The expression pattern does not correlate with the pigmentation pattern, the amino acid sequence deviates considerably from the consensus of typical CHSs, and the catalytic properties are different. The data indicated that it represents a new member in the large superfamily of CHS and CHS-related genes.

In experiments that involved chemical analysis of plants where the transcript was down- regulated through antisense transformation, and enzymology of the corresponding enzyme produced in E. coli, we could show that the gene product was responsible for the biosynthesis of two related glucosides that have bioprotective properties. Gerberin and parasorboside are not related to flavonoids except for that their biosynthesis occurs via a polyketide intermediate. The unusual chalcone synthase like gene has diverged in gerbera and related species, and become involved in a different and novel metabolic pathway.

Gerberin and parasorboside are glucosidic lactones. Gerberin has been found only in gerbera, and its biological role is unknown. Parasorboside is best known as the bitter tasting compound in mountain ash berries (Sorbus aucuparia), but it is also found in cranberry (Vaccinum macrocarpon) and in Osmunda japonica, a fern. The glucoside acts as antifeeding compound against certain butterfly larvae, and is regarded as the precursor to parasorbic acid, the ’plant form’ of the widely used food preservative sorbic acid.

The pathway to gerberin and parasorboside is blocked in gerbera plants transformed with antisense construct of gchs2. These plants appear phenotypically normal, but they are highly susceptible to fungal diseases as well as to certain insects. The disease resistance provided by gerberin and/or parasorboside would be attractive to utilise in other ornamental or crop plants. Our aim is to identify and isolate the remaining enzymes of the pathway. GCHS2 (a 2-pyrone synthase) is able to synthesise a candidate precursor to gerberin and parasorboside (triacetolactone). Putatively, specific reductases and glucosyltransferases are also needed, and possibly a glucosidase to release the final antifungal compound.