I started my postdoctoral research project, Convergent Worlds in the Digital Age. New Forms of Participation and Sharing in Transmedial Environments (2017–2020) in September at the Collegium. The project is based on my expertise as a literary scholar and narratologist. However, my aim here is to combine literary theory with research on digital media, social interaction, games and fan cultures in order to analyse the relationship between material artefacts and imagined environments in the art after the digital turn. In this blog post, I briefly explicate one of the key ideas of my project: why is it important to take the process of digitalization into account when analysing transmedia – and, vice versa, how might the analysis of transmedia help to understand the digital turn?

The Layers of Contemporary Transmedia

Although the ongoing technological change has been noted in transmedia studies, it has not yet been seriously addressed. To get a more thorough picture of the change and its effects on transmedia, I have coined the term transmedial environment, which is designed to cover both of the two layers of contemporary transmediality. Firstly, there is the layer that has already been observed in narrative theory and media studies and is often discussed through the concept of media convergence. It includes “transmedia storytelling”, the practice of using multiple media platforms to create narrative experiences, and the analysis of phenomena such as the transfer of media characteristics from one medium to another or narrative representation across media. Transmediality in this form is an age-old phenomenon, as the dissemination of Greek myth through various artistic media, for example, suggests.

Secondly, however, there is a more contemporary layer, which in the current context can be approached as a new environment for storytelling. It is the one of media hybridization: the way (previously separate) media and their techniques and properties get incorporated by the computer, becoming genuinely remixable as a result. Third concept that is often brought up in relation to transmedia is the conglomeration of media owners, but I will not address it here further.

Among the most widely known examples of contemporary transmedial environments are franchises such as Star Wars, Harry Potter and Star Trek. All of these include novels, films, games, and so on. While they have been discussed in relation to media convergence and conglomeration (Star Wars, in particular), the fact that both authoring and using such environments are increasingly facilitated by the computational media has not yet been sufficiently addressed. 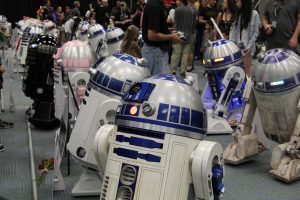 Quite a few transmedial environments are still created for the purpose of being “storytelling systems”. However, the ancient technology of storytelling is now enmeshed in a software-driven environment. This environment not only has the potential to “transmediate” all artistic media, but also differs fundamentally in its structure and strategies from verbal language, the traditional focus of narrative theory. It is therefore crucial to note that the logics of convergence and hybridization have not only enabled the rapid proliferation of entertainment experiences that combine affordances and properties of more than one medium, but are also being realized in contemporary transmedia.

The Effects of Digitalization on Transmedia

In order to understand the effects of computational environment on practices of storytelling, my project suggests that we look beyond the media objects and their content. Due to the ever-intensifying process of media hybridization, various originally print-based forms of media have begun to acquire properties of computational media. The two crucial markers of the computer’s ontology, the database and procedurality, have brought about a multiplication of narrative and the interplay between a single instantiation and the archive of many possibilities.

As a result, there is a definite shift of focus away from objects with a beginning and end towards the underlying patterns on which varied instantiations can be based on. For example, the basic elements of stories – such as characters – can be viewed as process-based instead of being understood as parts of an authored environment that is fixed and not open to variation. This development concerns the processes of both creating various media artefacts and engaging with them. Furthermore, it urges us to challenge the notion of transmedia as centred on a single narrative and content with clearly defined boundaries.

In my view, the shift away from beginnings and ends is visible on a larger level in the form of networks. The model of network also means that there is not centre – there are only nodes, connecting to one another, capable of endless expansion. This well illustrates the nature of contemporary transmedia in the sense that the author, the “originating transmitter” is quite impossible to define, giving way to the more communal, networked forms of authoring and creating. From the viewpoint of storytelling practices, this change marks a considerable shift from the model of transmission – and, especially, transmission of complete messages – towards the model of circulation and manipulation of content.

Instead of only looking at the ways in which elements such as characters can be transferred (or transmediated) from one medium to another, we could examine processes the characters and the ways they are maintained are based. In many transmedial environments, which can accommodate material indefinitely, new interpretations and instantiations of content are constantly created – and debated, as the heated criticism towards the reimagination of the Klingons and the Federation technology in a new Star Trek television show, Discovery, illustrates.

Together, the incorporation of various, previously distinct media by the computer and the network model inherent to the society powered by electronic information and communication technologies prove the importance of digitalization to the contemporary art and entertainment. Especially interesting is the question of narrative multiplication within the larger frame of social networking: while the new forms of participation and sharing do facilitate the fragmentation of old, “culture-defining” stories, the stories told within distinct communities are, more often than not, extremely standardized. 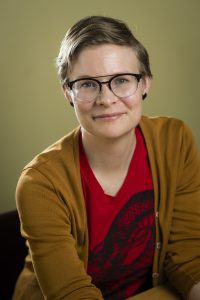 Hanna-Riikka Roine is Core Fellow at the Helsinki Collegium for Advanced Studies. Her doctoral dissertation in Literary Studies, Imaginative, Immersive and Interactive Engagements. The Rhetoric of Worldbuilding in Contemporary Speculative Fiction (University of Tampere, 2016) pursues speculative worldbuilding as a rhetorical and communicative practice beyond textual fictions to digital, interactive, transmedial, and fan fictions. Her current research project combines narrative theory with research on digital media, games, and fan cultures, and aims to provide an innovative way to analyze both the poetics and the collaborative aspects of new creative practices.