Sodankylä, one of the three municipalities in Northern Lapland (almost 700 km from Seinäjoki) has for long suffered from high unemployment and out migration. The positive development began in 2009 when the investment phase of the Kevitsa nickel-copper mine, worth USD 470 million, began. The Kevitsa mining company has plans to extend their activities, which would mean a sizeable increase of employment in the region.

Moreover, the Sakatti mining company has reported finding a large deposit of nickel near Sodankylä. Exploration phase is going on, but the start of the mining investment is yet not known. The third mine is Pahtavaara gold mine, which will still operate for many years. Keeping in mind the above, the municipality council has to make strategic decisions about which and by how much it should increase the provision of public services, and the population forecast with demographics is here a key aspect. Providing such an estimate is the main goal of the research project “Regional and socio-economic impacts of mining in Sodankylä” (Jan-May 2013).

The AVA team, that is; Hannu, Susanna and me, started this working year by visiting the Northern, Lapland between 8th and 12th of January. Receiving the invitation from the municipality of Sodankylä, we began our long journey up north by train. An important stop, on our way was in Rovaniemi where within one day we visited the Geological Survey of Finland (GTK), the Regional Council of Lapland, the University of Lapland, the Arctic Centre and the Centre for Economic Development, Transport and the Environment (ELY-keskus). Of course, in some cases our team had to split, but this did not affect the quality of the meetings. Not only we have reached our goals, we have collected information and made contacts regarding the mining case, but also we have gained new ideas and possibilities for the future cooperation. In the evening, there was just enough time to visit the Santa’s Village with its hard-working reindeers.

Next morning we continued to our final destination by car. In Sodankylä we interviewed the local representatives of the municipality, and informed the municipality council about the study we will work on. An evening info-session was organised for the municipality hall workers and town council members. The attendance was surprisingly high, especially as for such late hour. The vivid discussion based on Hannu’s presentation and the final applause gave the impression that people in Sodankylä not only are seriously considering the socio-economic impacts of mining as important, but they look forward to the results of the projects, with hopes.

As with every work related trip, next to the official side, there is this typical touristic and discovering side as well. First time in Lapland- first time visiting a mine, nickel-copper mine, in detail. In such remote region like Lapland, finding a very international and modern style managed mine was a bit of a surprise to me. What was interesting, we all took breath-tests at the entrance gate because they have a zero tolerance for alcohol. The Finnish version of the test sounded like: “Hhhuuuomenta”. Kevitsa’s CEO, Andrew Reid openly discussed with us the issues of planned development of the mine and the importance of preparing the Sodankylä municipality for the upcoming enlargement of the mining activity. Mr Reid definitely presents a type of management that is employee-friendly and very responsible, but also English speaking, therefore the language skills of mine workers was a positive surprise. A sight-seeing tour was a memorable experience. The mining machines are impressively big, and as we were told, impressively expensive. Finally, seeing many female workers was also rather a surprise, however, as it was presented by the CEO, a female workers are more than welcomed at the mine, they just need to have the proper skills. Later on, we also met with the CEO of the Sakatti mine; this meeting however, had a typical office character.

All in all, the trip was very successful from the professional point of view, as well as from the personal one. Lapland represented itself as a picturesque landscape, remote but friendly and open, where people are much warmer than the weather. Pity, we did not have a chance to see the Northern lights; however we saw truly beautiful sunset on our way back from the North. 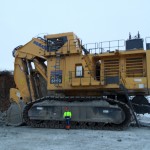 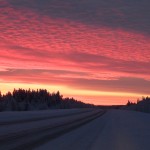