During the week we pondered on different questions behind the feeling of fear in urban space. Why and how does it appear in the cities and how can we reduce it?

When thinking of fear in urban space, we directed our focus on the surrounding elements.  Our questions were that is the feeling of fear built by physical matters like architectural solutions or does it have its roots deeper in social structures e.g. in exclusion? Also when we think about the solutions for reducing the feeling of fear, there is the same division of physical and social aspects.  Do people want hard physical measures like cameras and guards or soft measures like social control by invigoration of the space? We took a closer look to these questions through examining local studies, going through city reports from our own cities and with fieldwork, which included observing and interviewing.

Because our workshop group comes from different places we firstly observed our own living surroundings and here are just some examples that were noted:

Malene’s neighborhood in Copenhagen feels very safe even though there are only very few cameras around. 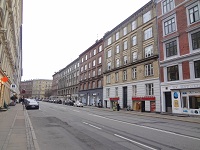 Ellen’s neighborhood in a smaller town  in northeastern Germany feels very safe as well. Still some areas are restricted with gates and fences even when it seems unnecessary. 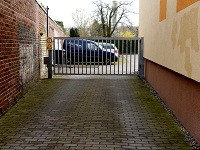 Lotte examined the region of Kallio in Helsinki and found curiosity in these overly protected playing grounds.

Ingmar’s neighborhood in Utrecht had a parkway which people don’t use after dark.

We concluded that actual safety of the place doesn’t always correlate with the feeling of fear that people get. From the interviews at the railway station we noticed that surveillance is appreciated and people don’t feel controlled by that. Also police is more wanted than guards. But all in all people feel safe there (at least at the day time) even though that is one of the locations of most public violence.  Another thing we noticed after getting to know Helsinki was that alcohol consumption keeps coming up in many contexts when talking about fear.

Lastly we also did cool urban exploring to an abandoned mansion area in the woods just three kilometers from the city center of Helsinki. And nobody was scared 🙂 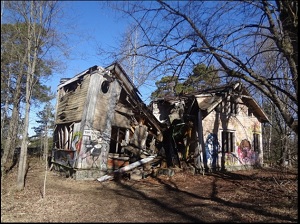 This blog is going to be updated during and after our seminar Interactions in Urban Space that is held 14. – 18.04.2014.

There is going to be writings from the workshops and other interesting updates from the happenings.