The idea of creative problem-solving is to bring to the pupils the potential of a large group of people, all brainstorming and coming up with ideas to different problems. According to Constructivism, pupils are able to combine their knowledge and skills in a way that, in the end, results in something new. Creative problem-solving develops the pupil’s entrepreneurial skills, creativity, persistence, and collaboration skills. It is key that the pupils are actively involved and that the atmosphere in the classroom allows for creative work. This can be achieved with the help of different warm-up exercises.

Creative problem-solving techniques can be used to help the invention process and to identify issues. This is useful when coming up with ideas for solutions. Some traditional methods include brainstorming, distant thinking, and the SWOT analysis. There are ample sources on these methods, as well as on how to create a creative atmosphere. See, for example:

Nowadays several different digital tools are available, and the use of paper can be avoided. These tools also make it easier to save, view, evaluate, and share the content with the class. See, for example:

Regardless of which problem-solving method or digital tool is used, the aim is either to identify and define the problem, to generate a multitude of ideas for solving the issue, or to evaluate the ideas in a systematic manner. Some creative problem-solving techniques include all the stages of the creative process.

The most challenging aspect of a creative process if generating a large amount of ideas. The amount of ideas can correlate with their quality, as the more ideas have been put forward, the more thought has been given to the problem. Pupils sometimes tend to get stuck with the first idea they come up with and no further thought is given to the issue. A good idea is like a possession you do not want to let go, even when sharing and developing ideas further with others might result in something more valuable. The pupils tend to come up with more versatile ideas in larger numbers when they are still unaware of having to try and carry them out themselves later.

Here are some way to generate ideas digitally.

This method is similar to the mind map but more rigorous. First, a problem is selected, and eight different points of view are attached to it. After this, eight different ideas are derived from the eight viewpoints. Below is a picture of the 8×8 method being used in Flinga. The topic was “schools are wasting too much food”. 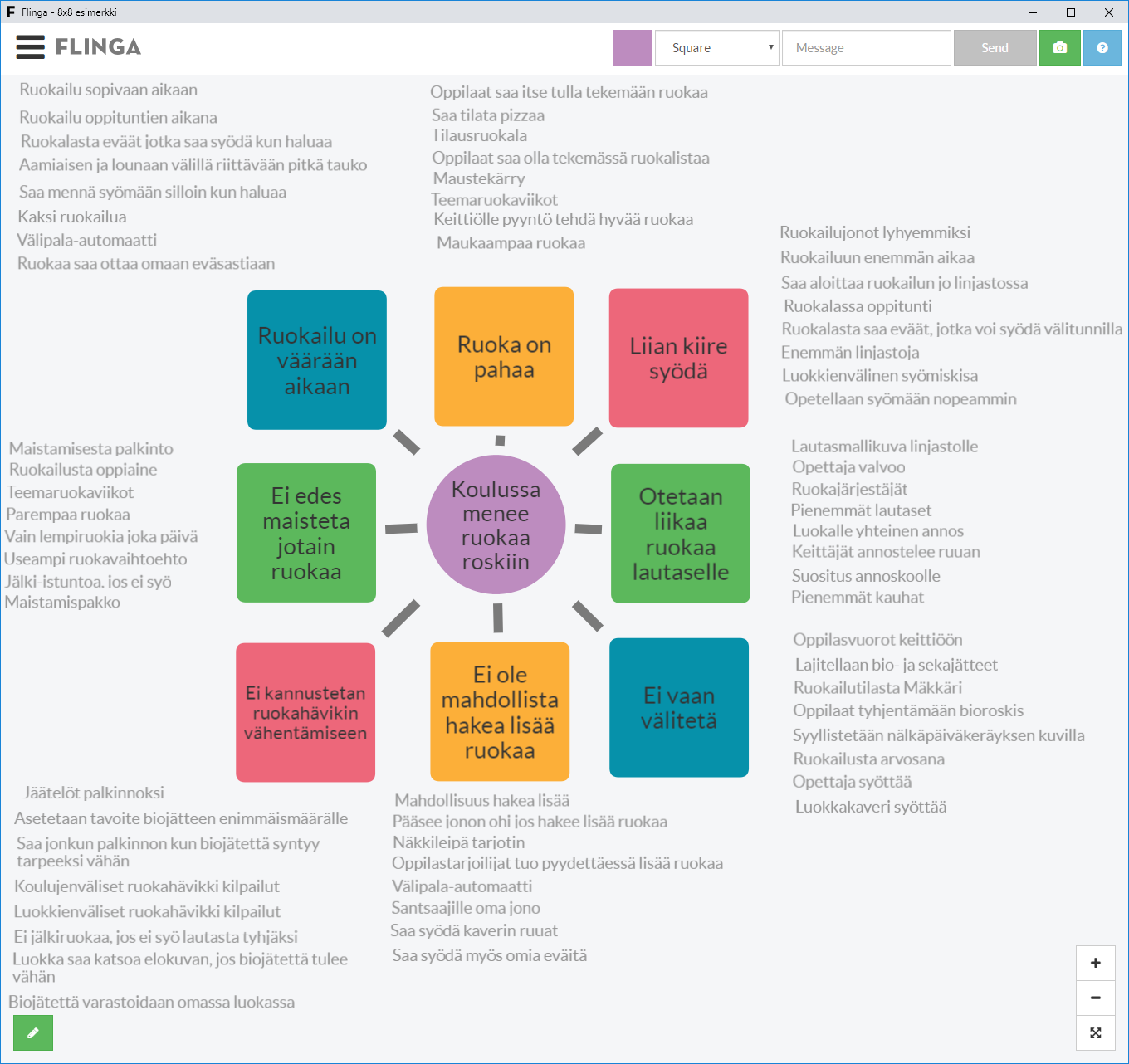 The distant thinking method, which uses analogies, can be used to produce ideas, both mundane and innovative. The idea is to pick an item, organism, or phenomenon from outside of the problem at hand. For example, when developing a product, a list is made of the attributes of the distant item, and each attribute functions as a basis for a new idea to improve the product.

The distant thinking method generates a large amount of ideas very quickly. Most of the ideas will not lead to anything useful, but the method is a good way to think outside the box. The item used can be something from everyday life or, alternatively, something quite distant.

Distant thinking is easy to carry out in school with the help of camera phones and search engines on the internet. Here is an example called “Boring place – favourite place”.

The pupils are asked to take pictures of places in the school that they find dull, boring, or in some way disagreeable. After this the group reassembles. The members show each other their pictures from their phones or using a digital screen. The group then selects one picture to try and make the place it depicts more agreeable. Alternatively, the whole class can select 3-5 pictures.

Next the pupils are asked to think of a place that they find enjoyable and to bring up a picture of it online or on their phone. They will not, however, show the picture to anyone else. Taking turns, each one takes one characteristic or attribute from their favourite place and brings it into the boring place. All ideas are written down for evaluation. It is a good idea to regroup for the evaluation stage. The new group selects three viable ideas for the improvement of the boring place.

In the context of circular economy, pictures can be taken from places that appear problematic from the point of view of circular economy. After selecting the pictures to be looked at and after regrouping the members will think of their favourite animal and find a picture of it. Then the members will take turns suggesting improvements on the pictures by first thinking of the attributes of their favourite animal, its behaviour, or its habitat. Then the ideas will be evaluated and a small number of ideas that were deemed good will be used to improve the pictures.

The picture above is an example of a non-functioning recycling unit, where products tend to end up in the wrong containers. The goldfish in the bowl is the favourite animal. One attribute of the animal’s dwelling is the transparent bowl, which makes it easy to look at the fish. The result is transparent recycling bins, which will be easier to fill with appropriate items.

The pupils are divided into groups, and each group thinks of and writes down problems relating to an issue. The problems are passed on to the next group who then thinks of possible solutions to one or several of the problems. A third group will then evaluate the points of view defining the problem and the factors restricting or limiting the ideas. Then a fourth group will evaluate the ideas and selects one to be carried out. The selected idea can still be refined at the end of the process.

The recycling of problems and ideas is based on the notion that in creative processes people are inclined to select the first viable idea that comes to them. If the pupils do not know that they will be the ones executing the idea, they will come up with more varied ideas. It is also important to make a distinction between idea-collecting and evaluation. In this method, the stages are all separate from each other and there is no danger of getting stuck in only one idea.