The aim of this interdisciplinary learning module is to guide the pupils towards a circular economic way of thinking. The idea is not to teach circular economy explicitly, and it is, in fact, entirely possible to teach the module without ever mentioning circular economy.

It is, however, beneficial for the teacher to have a deeper understanding of circular economy in order to be able to plan and prepare the module and to support the pupils in the spirit of circular economy. The basic principles and transitions of circular economy covered here on this website are meant for teachers. Other materials are available for a more explicit approach to teaching circular economy: see, for example, Circular Classroom and the Circula game. 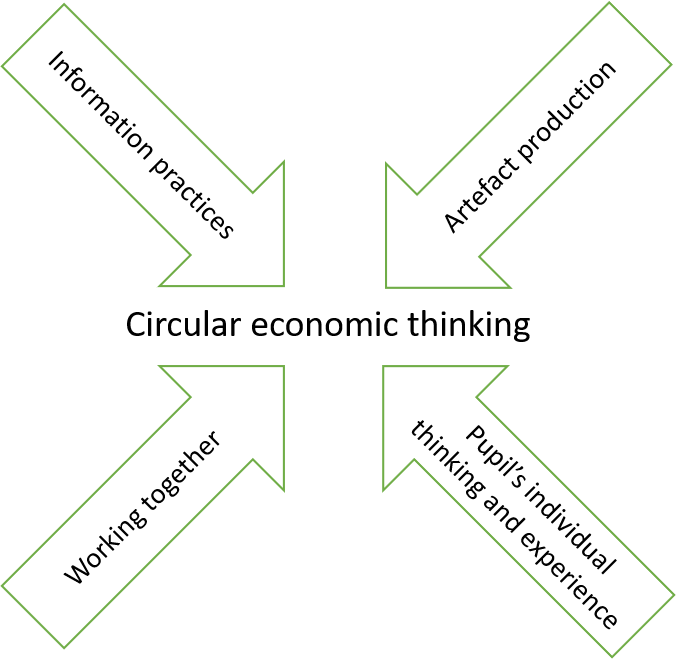 Working together and producing the artefact refer to the invention created in the group For invention creation, information practices from different fields are needed. The extent to which they are used depends on the pupils and their ages, however the information practices are always underlying the goings-on in the classroom. Working and acting requires the pupils to think for themselves, and physical actions will help shape their thinking to be more in line with circular economic principles.

The idea of producing an artefact is based on invention pedagogy, a relatively recently coined term. In practice, it refers to the combining of creative problem solving and artefact production to create a process consisting of creation, testing, and execution.

The theory underlying the idea of physical actions is Seymour Papert’s Constructionism, which suggests that learning happens by building an artefact that is sharable.

In this case, we are creating intangible inventions. However, they are based on the same basic principle of co-creation and artefact production, regardless of being digital in form, rather than physical. The nuances of inventing do not need to be stressed when teaching, but the graph of the innovation process might be useful when describing the different action stages.

During past multidisciplinary modules it has become apparent that processing the idea of circular economy an engaging in potentially unfamiliar and unusual activities places a heavy cognitive load on the pupils. It is thus recommendable to divide the module into smaller portions. It might be a good idea to start with only one lesson, or with a maximum of two. All in all, a suitable timespan for the module is 2-3 weeks, with 8-10 lessons in total. If the time is too short, the pupils might not finish their assignments, and if it is too long, they might become frustrated. Knowing your pupils is important when planning the module.

Circular economy and sustainability is considered in physical actions also as an internal value, and teaching should reflect this. Simply put, this refers to using digital tools and decreasing waste, for instance. We might, for example, decide to use Flinga instead of physical Post-it notes for idea collection. This goes back to the observation described in the Introduction of these materials, which inspired this university course.

A sustainable future is undoubtedly an important topic for many teachers also on a personal level, and many people are extremely aware of things relating to it. We should remember, however, that young people might also be experiencing climate change distress. This is why it is crucial for the teacher to avoid inadvertently adding to the feelings of distress by accidentally placing blame on the pupils and their choices and actions. It is a good idea that the teacher is prepared to face feelings of anxiety relating to the state of the environment and the climate. Panu Pihkala’s blog Ympäristöahdistus ja toivo features a good source post, titled 10 suositusta ympäristöahdistuneelle, which might be helpful. A good place to start is to emphasise that past generations have, partially by accident, made a grave mistake that has lead us to the current situation, which we can still rectify. This module is, in fact, more about education and welfare and less about teaching, and can be thought of as a tool for environmental education and empowerment to help tackle climate change distress.

In the university courses, actions have been planned together with teachers, bringing us closer to design-based research. Due to this, a so called conjecture map (Sandoval, 2014) has been created to aid with teaching research.

In the pilot stage of this interdisciplinary learning module, some pupils taught by the teachers taking part were interviewed about the four transitions of circular economy. The results were presented at the Symposium for Subject Didactics 2019. The results from the interviews have had a direct impact on how the execution of subsequent study units. The transitions dubbed “from waste to raw material” and “from single-use to fixable” have almost entirely been abandoned and inventions for shared use have been brought to the forefront. “From product to service” has also been omitted from primary school teaching, as the pupils appeared to experience substantial difficulty grasping the notion of services.