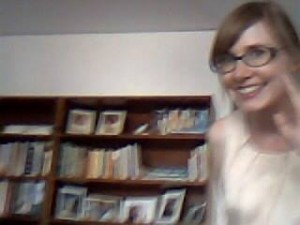 My son took this picture when he was three years old.

My research interests stem from language use as a social practice – in eighteenth-century letters, amidst the processes of language standardisation, in social networks of the past, and in the language of the individual. I’m particularly interested in the third wave of sociolinguistics and its applications in historical (socio)linguistics: what kinds of social functions do linguistic variables have in historical periods? When there is a possibility for linguistic variation, the chosen features are inevitably placed under some scrutiny: when eighteenth-century women use more contractions in their private letters than men (especially when they’re writing to other women), what can we say about the social meaning of those lexemes? What kinds of qualities, attributes, relationships do they index? What about linguistic stigmas in an age of the normative tradition? Who could afford to ignore them?

I defended my PhD thesis in 2009 on the topic of sociolinguistic variation and social network influence in eighteenth-century Bluestocking correspondence. I’m currently working on a linguistic biography of the renowned Bluestocking Elizabeth Montagu (1718-1800), and I’m also a member in the Elizabeth Montagu project which aims to produce a digital edition of Montagu’s letters. I’ve edited a few hundred letters in the collections of the Henry E. Huntington Library, British Library, and Houghton Library, and the work continues: my aim is to publish the first version of the manuscript-based Bluestocking Corpus, designed for sociolinguistic analysis and network analysis, sometime in 2014. I’ve mostly focused on the private letters of the eighteenth-century Bluestocking circle, the closest to the vernacular we are able to investigate in historical periods, but in order to understand an individual’s full range of linguistic resources I’m also exploring their public texts, such as Elizabeth Montagu’s tremendously popular, anonymously published Essay on the Writings and Genius of Shakespear (1769).

My research interests include the social aspects of spelling variation in historical texts as well as in present-day online communication, intertextuality in eighteenth-century letter-writing, the concept of prestige and its social and linguistic implications, and the relationship between 18th-century language standardisation and actual usage. I’m also attempting to educate myself in the history of book publishing and editorial practices from the eighteenth century to present day, and keeping an eye on what takes place in the field of digital humanities. My corpus method skills are badly in need of updating.

I teach the occasional advanced level course at the Department of Modern Languages and academic writing (spring of 2014).

My publications and other activities

My assistant and faithful paperweight: 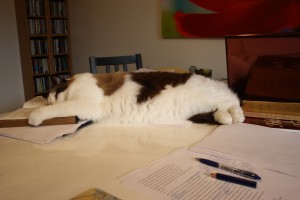