The University of Helsinki will be covering Article Publishing Charges for corresponding authors affiliated with the University, including HU Central Hospital, in any of the Frontiers journals.

This agreement will further encourage UH authors to publish open access, increasing uptake of open access to the results of mostly publicly funded research, to the benefit of the scholarly community and the public at large.

To submit your article under this institutional agreement, please select ‘University of Helsinki’ as institutional payer in the invoice section when submitting your article. Frontiers will then verify your eligibility with the Helsinki University Library, and if confirmed, the APC will be paid by the Library upon acceptance.

If you have any questions, please do not hesitate contact us: hulib-apc@helsinki.fi

Try BrowZine to find, follow and read your favorite scholarly journals offered by HULib – while discovering new titles along the way.

BrowZine is available from your web browser and as a mobile app for your iOS and Android devices.

BrowZine is on trial until 11.6. and we’d appreciate your feedback on this service. Please, notice that during the trial period the journal collection available in BrowZine is a test collection, search results  may vary.

My Bookshelf is one of our most popular features. With My Bookshelf, you are notified anytime a new article is added to your favorite journals, keeping you up to date with the latest research.

You can send feedback: e-library@helsinki.fi 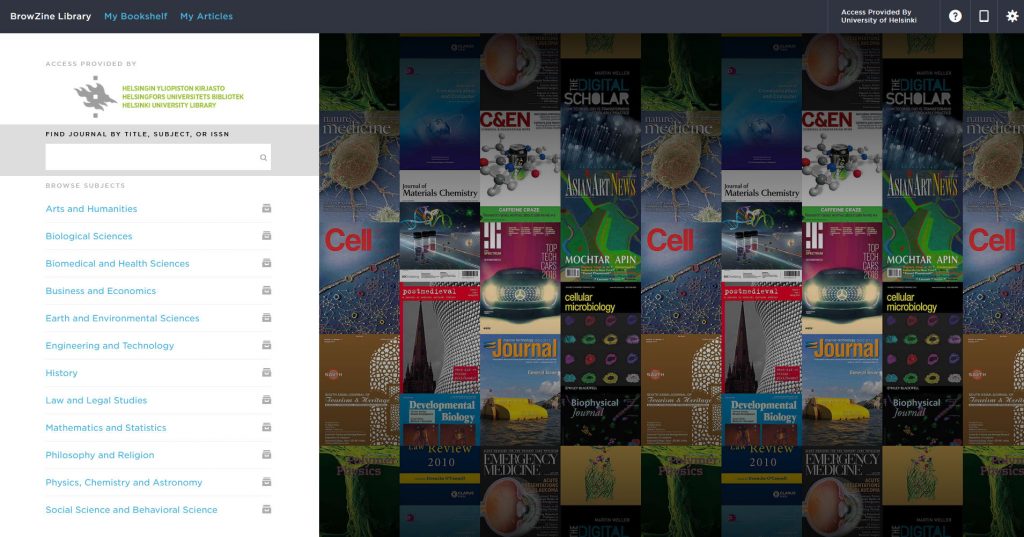 Please evaluate the importance of different library services and how well the library has succeeded in offering these services.

Helsinki University Library’s Customer Survey is available from the 23rd until the 29th of April, 2018.

By responding to the survey, you can influence the future of Helsinki University Library’s services. You can also add comments and suggestions.

We give away 25 small prizes (thermo mugs and movie ticket packages) to the respondents of the survey.

Link to the English Survey: bit.ly/HULibCustomerSurvey

Basilica Online is a fully-searchable online edition of the 17 volumes of the Basilica text and its scholia, as edited between 1945 and 1988 by H.J. Scheltema, D. Holwerda, and N. van der Wal. The Basilica is the single-most important source for Byzantine law throughout the period of the Byzantine empire, and is a major source for Byzantine studies more broadly.

MGG Online is a new digital encyclopedia that includes the second edition of Die Musik in Geschichte und Gegenwart (MGG) as well as regular updates and newly written articles.

You can also find this e-resource in Helka.

Feedback you can write to kk-tietopalvelu[at]helsinki.fi

All researchers affiliated with University of Helsinki have now the possibility to publish their articles open access in Elsevier journals free of charge.

New open access publishing model is part of the three year agreement between Finnish universities and research institutions and Elsevier. Read more about the agreement. In addition to the current Elsevier journals you have access to all Elsevier back-file issues. All these journals can be found via Helka database.

If you have any questions, please contact Helsinki University Library: hulib-apc@helsinki.fi. We are happy to help!

Please note: The My Archive and the Document and Citation Download functions are not available on this trial edition. Documents can be viewed using the image viewer function.

This database can also be found via Helka database.

The subscription of the CMMC (Communication & Mass Media Complete) resource has expired on June 20th 2017. Library, however, provides alternative access to the most popular journals and they can be found in Helka database.

In addition the following journals will be subscribed separately and they’ll be available in August at the latest:

The FinELib consortium that centrally acquires electronic materials for Finnish universities, universities of applied sciences, research institutes and public libraries, and the international science publisher Elsevier continue the negotiations started in 2016.Currently the agreement makes it possible for researchers to continue using Elsevier’s journals until end of 2017.

The ongoing negotiations try to speed up the transition to open access by getting Finnish researchers the right to publish open access in as many high quality scholarly journals as possible without extra charge (Article Processing Charges). Unfortunately the first meeting showed that Elsevier is not willing to develop open access business models. Elsevier insists on keeping up the traditional subscription model and the price increases linked to it.

FinELib and Elsevier will continue the negotiations in June.

The results of the survey will help your library in evaluating and developing the library services. Your opinion is important to the library!

By answering the questionnaire you can also take part in the prize draw for books and other prizes.

The national user survey is carried out 4.3.-7.4.2013 in the whole country. The users of public libraries, academic libraries and several special libraries can take the survey. For three years ago the survey was taken by over 34 000 library users. The survey is coordinated by the National Library.

To take the survey, please click the link below:
https://my.surveypal.com/yleinenkysely