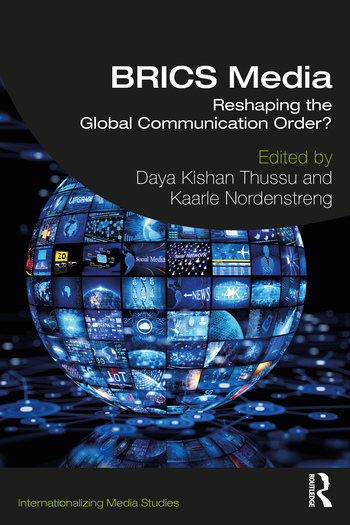 In September, Svetlana Pasti from Tampere University will present her research ‘BRICS journalism as a new territory for localizing journalism studies’. The paper, co-authored with Jyotika Ramaprasad, was published in the edited volume ‘BRICS Media: Reshaping the Global Communication Order?’ (Routledge, 2021).

Online talk will be organized in Zoom September, 14 from 12:00 to 13:30 (GMT+3). If you want to participate and get emails about the next online talks, please leave your contact information here until September, 13 noon: registration form. If you registered for Online talks or RMLN email list before, no need to register again, we’ll send you the information.

This chapter takes a second look at some of the findings of an empirical study of BRICS journalists, reported earlier in two collaborative publications (Pasti and Ramaprasad, 2015, 2018), using the ethical and epistemological analytic techniques of the BRICS perspective as proposed by Albuquerque and Lycarião (2018). The purpose of this chapter is to situate interpretations locally, within the historical legacies and current dynamics of journalism, including its imported influences, in these countries. We selected journalists’ beliefs about professionalism, functions of journalism and roles of journalists as variables to reconsider in this light because they comprise the essence of news. We also included social media use because they provide a new venue through which journalists practise their profession and deliver functions and roles, and is thus a new avenue to journalistic freedom.

Svetlana Pasti is University Researcher, Adjunct Professor at Faculty of Information Technology and Communication Sciences (ITC) at Tampere University. Her research interests are in journalism studies and comparative research in the BRICS countries. She is author of two monographs A Russian Journalist in Context of Change: Media of St Petersburg (2004), The Changing Profession of a Journalist in Russia (2007) and over 40 peer-reviewed chapters and journal articles such as Journal of Communication, European Journal of Communication, Brazilian Journalism Research, and Nordicom Review. She is the author and co-editor The BRICS journalist: Profession and practice in the age of digital media (Special issue of African Journalism Studies, Routledge, 2015), and Contemporary BRICS Journalism (Routledge, 2018).