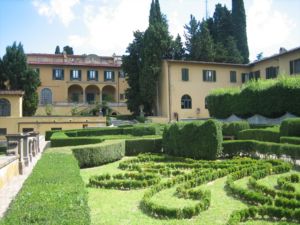 Villa Schifanoia and the Cappella

Villa Schifanoia houses the Department of Law, the Department of History and Civilization, and the Academy of European Law. The villa was built on a country farm, part of the Villa Palmieri estate which is thought to be the setting for much of Boccaccio’s ‘Decameron’. The original meaning of Schifanoia is ‘to chase away boredom’, an apt name given its literary heritage.

From the mid-15th century the villa was owned by the Cresci family, who made their fortune as merchants and dyers, before passing through Italian hands – bought, inherited or gifted as a dowry – for the following centuries.

The 20th century was marked by foreign ownership, including Australian, British and American. The latter was Myron Taylor, who as the US president’s personal representative to Pope Pius XII welcomed diplomats, politicians and financial figures to Schifanoia. In 1941, Taylor donated the villa to the Catholic Church, who installed the Little Company of Mary as directors of a Rosary College, educating young American women in fine art. The school closed in the 1980s and the villa was made available to the EUI.

To get to Villa Schifanoia from the bus stop in San Domenico, cross the road and take a sharp left into Via Boccaccio.

Villa Schifanoia is about 150 metres down the road on the right hand side after the traffic lights.

The Cappella is the small building next to the Villa.