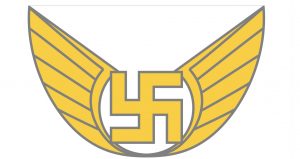 As I am working toward a book about history of the Swastika in Finland, I will be very happy to hear suggestions on existing research and debate on the symbol in other contexts too. Here, I have a short description of a short episode during which there was a conversation on the Finnish Swastika in various media.

In the first days of July 2020, a tweet of mine sparked a conversation in global media for a few days. It was about the continuity and change in the use of the Swastika by the Air Force of Finland. The situation was described by New York TImes as follows:

Finland’s Air Force Command has discreetly dropped a swastika logo from its unit emblem — after a century — and replaced it with a neutral insignia featuring a golden eagle.

The change, made to avoid false and uncomfortable associations with Nazi Germany’s notorious logo, took place in January 2017 but wasn’t announced publicly by the Nordic nation’s military at the time.

University of Helsinki world politics professor Teivo Teivainen, who is researching the use of swastikas in Finland during the 1920s and 1930s, noted the unit emblem issue in a Twitter post this week that brought the modification to public attention.

The story rapidly caught the attention of the Finnish and global media. This YLE article described some of the initial debate in Finland, sparked also by this article in Helsingin Sanomat. One of the first places where I was interviewed about the topic at that moment was this BBC News article. Soon, my tweets, articles and interviews were commented in many places.

In the United States, apart from New York Times stories appeared in media that ranged from Washington Post to New York Post and Fox News. Elsewhere, major outlets like Globo in Brazil or Der Spiegel in Germany joined in. As I am writing now, an increasing number of articles in various languages keep appearing.

One reason for the sudden and widespread interest was described by a Bloomberg article as follows: “His tweet gained traction against the background of an international campaign opposing racism sparked by the police killing of George Floyd, an African American. Protesters have targeted statues of historical figures associated with slavery and the West’s colonial past, from the U.K. to Greenland“.

One of the nice things was to see a concept I had invented a couple of weeks earlier to compare different kinds of swastikas commented in the media. An article in The Telegraph even used the original Finnish terms to describe it:

Professor Teivainen has coined a phrase in Finnish to explain how the use of a swastika could be problematic despite its innocent origin. Roughly translated, “visuaalinen natsahtavuusaste” means “how much something exhibits visual cues that are associated with Nazis”

Even though the translation of The Telegraph is not too bad, I would not refer to any assumptions about an “innocent origin”. As you can see in many of my comments, the story about the pre-1918 origins of the Finnish Air Force swastika has various nuances. In any case, in English I sometimes talk about the “degree of visual nazishness” to refer to the same thing.

For anyone interested in my earlier comments on the topic, in English, here is a YLE report Does Finland Need Its Swastikas, article in Christian Science Monitor called Finland Used the Swastika Before the Nazis. Why do they still?, as well as my short article  Should the Air Force of Finland Get Rid of the Swastika?

And now, for the first time, let me make freely available, with permission from the publisher, the swastika chapter of my book on Finnish history Maailmanpoliittinen kansalliskävely (Into, 2017). Here comes the chapter, in Finnish, called Erillishakaristi (“The Separate Swastika”): Erillishakaristi-luku.

The whole book, in Finnish, is available in electronic and print formats here, for anyone interested in my other stuff on symbols, racism and coloniality in Finland.

One of my current interests is to study swastika debates during the early decades of the 20th Century in Finland. I have done some preliminary research on it, but all suggestions are welcome, also on the perception and debates on the swastika in other countries and other times.