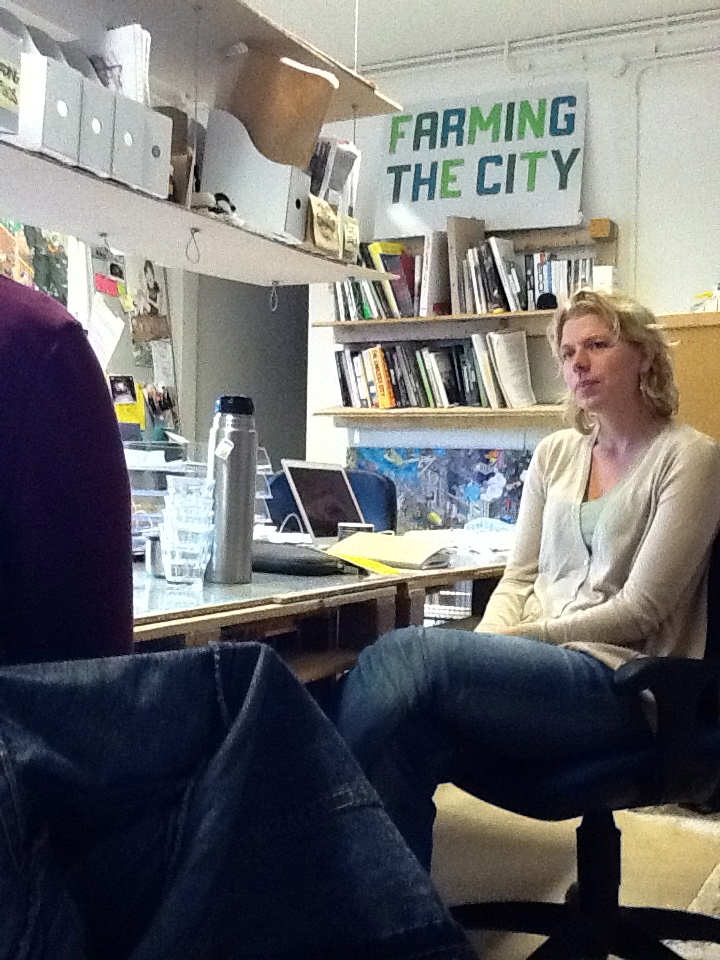 Anke de Vrieze in the Farming the City office.

We visited the office of Farming The City, which is a pilot project that has gathered different urban farming projects of Amsterdam together in an internet platform designed to provide an opportunity to discuss, debate and spread information about urban farming. Anke de Vrieze who is in working as a interview manager and project assistance, gave us a brief introduction to urban farming world of Netherlands. She told us that they have 20 projects that they choose to present in their webpage. Their goal was to introduce a “local food system”, a place-based, self-reliant food production system that would use available information about land ownership and use, planning policies and urban design initiatives.

The project has existed since 2010 and includes rooftop gardening, farming in empty buildings, school projects and various other innovative projects. Most of the projects are fully powered by small volunteer groups, but at least one business was established by an young entrepreneur who simply delivers food from organic food shops to customers by bicycle. The whole Farming the City -project left an impression that a lot of people are interested in urban farming in Netherlands, many small groups are active, but there is still a lot of work to get urban farming easily accessible for the general public. In Finland we are lagging behind a bit, but I believe that urban farming is a rising trend in the future, as it is already.

Maybe we could learn from the Netherlands that there is room for many players in the field, and that if one has an idea, they should definitely share it to other people with the same interests, and just get their hands dirty!

2 thoughts on “Farmers of the better future”