As readers of this blog know, I’ve been working for some time now on narratives in city planning, and storytelling as a concept for understanding layers of meaning in the city, as well as the rhetorics underlying urban development.

In planning theory and urban studies, a range of scholars are working with these issues, but the efforts are somewhat scattered -narrative theory in planning or urban studies is anything but an established field of study, and there are various assumptions of what this discipline should be about – discourse analysis? poetics of architecture? participatory planning? urban history?

Nevertheless, it would seem that this field of study is gathering steam and critical mass – and I hope my own work, as well as the work done at the Helsinki Literature and the City Network, the Ghent Urban Studies Team, and other groups, will contribute to this growth in depth and latitude.

New publications dealing with these issues give evidence of the richness of this burgeoning discipline – the latest I came across being “Tales of the City“, a special issue of the journal Articulo. 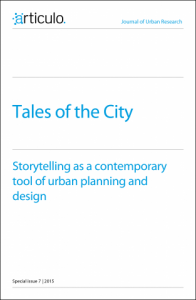 Strangely enough, and regardless of the journal’s title, the introduction does not explicitly refer to Ruth Finnegan’s seminal “Tales of the City”, which certainly should act as one possible point of departure of any study dealing with narratives in urban planning.

The intro, by Christophe Mager and Laurent Matthey, would seem to understand urban narratives first of all as the production of rhetorics in city planning, something aloof from the actual built environment – dealing, in other words, with an “urbanism that tends to substitute narrative production for real production of cities and territory” (Mager & Matthey 2015). The result may, intriguingly, in their point of view be a democratic deficit:

”storytelling is supposed to have led democratic communication off track through a pronounced concern for a good story, storytelling applied to the field of urban production may have led to an increasing preoccupation with staging and showmanship in projects to the detriment of their real inclusion in political debate” (Mager & Matthey 2015).

My own point of view of how narrative permeates current urban planning is quite different – of course, some of the narrative activities is primarily bound up with rhetorics, grand visions, the “good story”, marketing and branding newspeech, as separated from the drudgery of actual planning practices. But those planning practices are also informed by continuous processes of storytelling, and they are very much part and parcel of the “real production of cities and territory”, as Throgmorton, Van Hulst, and others have shown.

Reading “Tales of the City”, I can’t help but think that there continues to be a need for a narrative theory that distinguish between the various kinds of naratives used in the context of urban planning (cf. my 2014 article in the Finnish Journal for Urban Studies).

This week, Rome hosts the 22nd ISUF conference, with as title “City as Organism – New visions for urban life”. I’m not entirely sure what to expect from the wide range of interesting-looking papers that relate in broad terms to the issue of urban form and morphology – urban morphology as a separate field of study being somewhat of a mystery to me. But I’m very much looking forward to being inspired at La Sapienza by the conference’s academic input, as much as by that city that defies words as much as it inspired them. Reminds me of the fact that even the saints Jerome and Augustine confessed to have been “allured and teased by sensuous images of Rome” (Mumford 1961: 246).

I’ll be presenting my research on (em)plotting urban planning on Wednesday.

My last experience of Rome was watching La Grande Bellezza – I wrote a small piece of the way it depicts the “vortex” of urban life here.

I’ll try to get hold of some novels (hopefully in English translation) by the Neapolitan author Raffaele La Capria, who acted as one of the inspirations for the figure of Jep Gambardella in La Grande Bellezza.

Today (18.9.), the Finnish major daily newspaper Helsingin Sanomat, featured a large article, including interview, about my research in Narratives in Urban Planning. 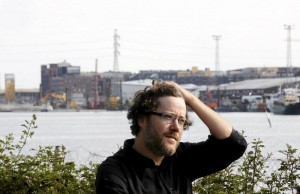 More on my research here.

Bottom line of the interview: narratives in planning do matter, and they are more than just branding, or an imaginative smokescreen. They guide not only images and experienced associate with a specific planning project – narrative structures also guide and inform the actual developments on the ground, in the built environment.

To quote a recent article by Noah Isserman and Ann Markusen: “Will planning finally pay attention to its own rhetoric?”

Speaking tomorrow, Friday 18.9.2015, on the subject of literary perspectives on city marketing and branding (in Finnish).

My talk is part of a series of morning coffee sessions, organized by the Urban Academy / Kaupunkiakatemia.

“The spatial humanities is a new interdisciplinary field resulting from the recent surge of scholarly interest in space. It prospects a ground upon which humanities scholars can collaborate with investigators engaged in scientific and quantitatively-oriented research. This spatial turn invites an initiative focused on geographic and conceptual space and is poised to exploit an assortment of technologies, especially in the area of the digital humanities. Framed by perspectives drawn from Geographic Information Science, and attentive to cutting-edge developments in data mining, the geo-semantic Web, and the visual display of cultural data, the agenda of the spatial humanities includes the pursuit of theory, methods, case studies, applied technology, broad narratives, persuasive strategies, and the bridging of research fields.”

Seems the “spatial turn” has not run out of steam, indeed.

The series fits in particularly well within the larger conglomeration of publications working with space and the humanities, such as Palgrave’s series on Geocriticism and Spatial Literary Studies and recently appeared journals such as Literary Geographies and Cultural Urban Studies. Exciting to be part of a dynamic and multidisciplinary field of study!

Update: and just as I ponder the return of the spatial turn, I bump into this:

“With the theme “Spatial Turn/Return,” we hope to explore space in its multiple, simultaneous, and plural manifestations–histories of practices and encounters of/with/in space and the theoretical and aesthetic articulations, disillusioned and empowering, that are constructed and mobilized around space. We also welcome papers that explore the many ways in which works of literature and popular culture reflect changing perceptions and definitions of space.”

Speaking 10 September at Laituri, Helsinki, about the urban waterfront as a landscape of endless possibilities – a liminal space in which past and future, known and unknown, city and nature, death and new beginnings combine.

My talk is part of my research project of Helsinki’s waterfront, its cultural identity in literature, and the narratives of the waterfront in urban planning.

My talk is part of a one-day seminar on “more life on the waterfront”, bringing a variety of approaches to the urban waterfront, linked to the exhibition Veteen piiretty viiva / Waterline.

The seminar’s program can be found here: seminar program.

I’ll be speaking on the subject of Emplotment in Planning in the context of Helsinki’s waterfront development – abstract below:

Recent decades have seen an increasing interest in the fundamentally narrative and rhetorical structure of urban planning. Urban districts take shape based on words as much as on concrete. Narrative elements such as rhetorical figures, storylines and plot structures are relevant not only for the way in which a particular planned area is presented to the general public or framed within local policy discourse, but also for the way in which larger visions of an urban future translate into concrete developments within the built environment.

This paper will examine the planning of Kalasatama (Helsinki), an ongoing case of urban regeneration, by applying methods and concepts from narrative and literary theory to the analysis of planning documents, marketing, and media narratives. A key concern will be the manner in which planning documents “emplot” a new area, both literally singling out an area within a geographical setting, and framing the development within a “plot”, a story with a specific dynamics and morality. Character, plot and metaphor will constitute the key narrative concepts. This paper will draw on the burgeoning field of narrative planning theory, with the specific aim to make concepts from narrative and literary theory more compatible with existing theoretical frameworks from planning theory.

Excited to take up a new job at the University of Tampere, where I will hold a one-year position as university lecturer of comparative literature at the School of Language, Translation and Literary Studies (LTL).

Literary studies at Tampere has an ongoing interest in the study of narrative (broadly understood) and a research group specifically working with spatial thematics, which means I will be able to continue my ongoing work on narratives in spatial planning and urban literary studies.

Also very much looking forward to the possibilities of cooperation with the Tampere University of Technology (School of Architecture, in particular)! 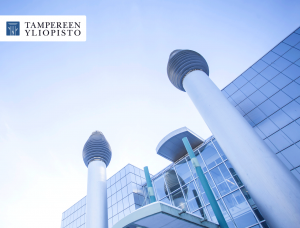