For the past few years, iLEAPS has been brainstorming about a 3-dimensional parameter or index that would describe the state of the biosphere, the atmosphere, and societies. The idea would be to explore the trajectories of all these three variables but, more importantly, to try and find any possible covariance between any two or among all three variables that would shed light on dependencies and interactions among biospheric, atmospheric, and socioeconomic processes in the past and in near-real time.

During the past year, the European Space Agency (ESA) has expressed strong interest to be involved in the development of such an index. Satellite information would indeed be indispensable because satellites can give information about large regions that are too remote and unattainable for ground-based observations.  ESA and iLEAPS co-organised a first workshop on the index on 13 June 2013 at the Max-Planck Institute in Munich.

The speakers in the workshop included experts in satellite observations, land use and land cover changes, social structures and stratification, data analysis, and socioeconomic sciences. One of the main problems with such a multidisciplinary index is deciding what kind of socioeconomic variables and indices should or could be used and how they could be linked with environmental policy, international trade, and land-use decisions. On the natural science side, many practical satellite applications exist that can produce useful data for describing the states of the biosphere and the atmosphere. Satellites are particularly useful for separating different land use and land cover types from one another – land management is of course one of the most direct links between socioeconomic and biospheric/atmospheric processes. However, although one of the main advantages of remote sensing is that it can be used to observe remote regions where ground-based observations are not possible, even satellite data is limited in some regions. Furthermore, satellite data will always need to be strengthened with ground-based observations and this is where international infrastructures and networks such as FLUXNET, ICOS, ACTRIS, LIFEWATCH and others come in. 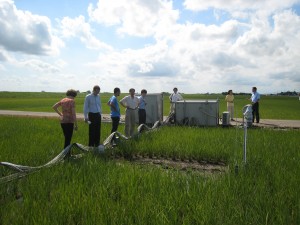 Photo of Tsukuba rice fields in summer is by iLEAPS-Japan.

iLEAPS Executive Officer Tanja Suni and iLEAPS-Eurasia Executive Officer Hanna Lappalainen travelled to the 3rd International Symposium of Arctic Research (ISAR-3) in mid-January with the aim to create new collaboration between iLEAPS, iLEAPS-Eurasia, and Japanese and Russian scientists. One of the main points of collaboration was the Pan-Eurasian Experiment (PEEX), a new iLEAPS project coordinated by iLEAPS-Eurasia at the Division of Atmospheric Sciences in the University of Helsinki.  The Finnish delegation also included Joni Kujansuu, the Finland-Asia coordinator of the Division working part-time for iLEAPS.

The delegation met five members of the Science Committee of iLEAPS-Japan in a small satellite meeting on the second evening of the conference. All the Japanese researchers present at the meeting are leading scientists in fields very relevant to either the new iLEAPS theme Sustainable Managed Ecosystems or to the Pan-Eurasian Experiment or both; Drs Takeshi Ohta, Tetsuya Hiyama, and Ayumi Kotani have more than 15 years of experience with land-atmosphere-society interactions in Eastern Siberia (http://www.chikyu.ac.jp/rihn_e/project/C-07.html) whereas Dr Kentaro Hayashi leads a large manipulation experiment on Japanese rice paddies at the Tsukuba University, looking at the influence of CO2 enrichment on carbon, methane, and, uniquely in Japan, also on reactive nitrogen cycles throughout the year (Free Air CO2 Enrichment experiment FACE http://www.niaes.affrc.go.jp/outline/face/; with nitrogen, FACE-N). The website of iLEAPS-Japan is now available in English as well; this will enable European scientists to keep track of the many land-atmosphere research activities in Japan especially around ASIAFLUX, where the leader of iLEAPS-Japan, iLEAPS SSC member Dr Nobuko Saigusa and iLEAPS-Japan coordinator Sawako Tanaka work actively to widen the flux measurement network in Japan, Korea, and other parts of South-East Asia. iLEAPS-Japan and coordinator Joni Kujansuu will also conduct enquiries in the Philippines in order to organise regional land-atmosphere-society activities there; one of the first steps will be an iLEAPS-ASIAFLUX early-career scientist workshop planned to take place in the Philippines in 2014.

iLEAPS IPO and iLEAPS-Eurasia would like to extend a very warm thank you for the entire iLEAPS-Japan group for a very pleasant and fruitful meeting!

Welcome to our Division’s blog! Ideas for a joint blog for our Division of Atmospheric Sciences, our Centres of Excellence, and our regional activitiesin China, India, South America and many other places have been thrown around for a long time and now we finally got it started. The aim of this blog is to help increase the information flow among our diverse groups in a way that is accessible to everyone and doesn’t take as much time as seminars; to tie our work into the bigger picture (sustainable development, climate change, global environmental change, human dimension); and to offer a forum for discussing any interesting topics we happen to think of.Anyone in our extended group is welcome to write to this blog on their research, travels, crazy ideas or other thoughts. Group supervisors/members are especially welcome to introduce their work and their people with a couple of photos and a paragraph from time to time to keep the whole Division and CoEs in the loop on what they are doing. The floor is yours!