Today, more than half of world’s population resides in urban areas, and this fraction is 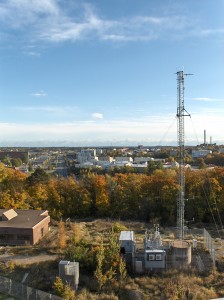 further expected to increase rapidly in the next decades. Thus, a growing number of people will be affected by urban climate. The ability to understand the processes leading to this specific micro-climate is crucial for sustainable urban planning and our quality of life.

In our Centre of Excellence, the Micrometeorology group has been observing the interactions between urban surface and the above atmosphere at the urban measurement station SMEAR III (Station for Measuring Ecosystem Atmosphere Relations) since 2005. We measure the vertical exchange of energy, water, carbon dioxide and aerosol particles with the state-of-the-art methodology, the eddy covariance technique, at two locations:  on a measurement mast in semi-urban Kumpula and in downtown Helsinki on top of Hotel Torni.  In addition to these continuous measurements, our group also conducts short-term campaigns to observe the land-atmosphere exchange of N2O and volatile organic compounds (VOC) in this urban micro-climate.

The aim of these measurements is to collect long time series of simultaneously measured exchange processes to develop parameterizations for various atmospheric models, and to understand the processes and their changes in time. We are interested how the different urban land use types, particularly green areas, affect the vertical exchange of different variables. For example, as a rough estimate for carbon dioxide, Annika Nordbo, Leena Järvi, Sami Haapanala, Curtis Wood and Timo Vesala recently found that if natural areas cover over 80% of the urban surface, the uptake of vegetation exceeds the carbon dioxide emissions in the source area (Nordbo et al. 2012). Thus, our measurements provide information for urban planners as well as evaluation data for air quality, numerical weather forecast and climate models.

The measurements are also part of the new Urban Boundary-layer Atmosphere Network (UrBAN) which combines a variety of different instrumentation providing data of the interaction between an urban surface and the atmosphere at different spatial scales. The network is a joint effort by the Finnish Meteorological Institute and the Division of Atmospheric Sciences. We also collaborate with groups around the world working with urban flux measurements. The near future plan is to compare the turbulent energy balance fluxes from Beijing and Helsinki using both measurements and modelling approaches.