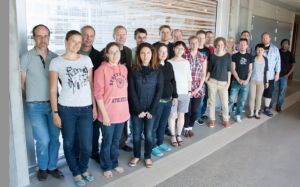 When the calendar reads June and the Scandinavian countries register the warmest temperatures in Europe, the most intuitive idea is not to stay indoors, draw down the curtains and start coding. However, that was exactly what 18 students and assistants did when the first summer school on atmospheric modelling took place in the modern building of Ingvar Kamprad Design Centre, Lund University, Lund, Sweden.

The school consisted of lectures on atmospheric sciences and computational modelling. During the course the participants were creating their own one-dimensional column model of atmospheric boundary layer. The coding language was Fortran 90 as is the tradition in atmospheric science and many other sciences. The students described the boundary layer meteorology by including the equations of flow and a first order turbulence closure. Emissions of volatile organic compounds from the vegetation were then added. Relevant atmospheric chemical reactions were likewise included and the chemical kinetics was modelled by numerically solving systems of differential equations. Lastly, the students coded nucleation, coagulation and condensation of aerosol particles and coupled the concentrations of the chemical compounds and the aerosol particles to the meteorological mixing.

The course was held from the 10th to the 19th of June and was organised by University of Helsinki and Lund University and funded by the Nordic Master’s Degree Programme in Atmosphere-Biosphere Studies (ABS) and Cryosphere-Atmosphere Interactions in a Changing Arctic Climate (CRAICC). We had participants from 5 universities and institutions and 10 different countries. The list of teachers included: from Lund University: Pontus Roldin and from University of Helsinki: Michael Boy, Sampo Smolander, Luxi Zhou, KV, Henri Vuollekoski and Ditte Mogensen.