Sea ice can be found throughout the year in the Arctic, as a result of freezing of the upper water layer of the sea. Its extent varies from year to year and depends on the dominant weather conditions. The minimum of the sea ice appears in autumn and the maximum just before the sea ice starts to melt, usually during the spring. Apart from the natural yearly variation of the sea ice extent, climate change is also playing a major role, since the largest warming is happening in the Arctic according to different climate change scenarios and, therefore, the sea ice is retreating to more northern latitudes. On top of this, a potential link between human coastal activities and further sea ice loss has not been widely researched.

Sea ice is an inherent element within Greenlandic culture and the identity of its people. Traditional livelihoods in Greenland greatly depend on fishing and seal hunting, and the latter one is largely dependent on the sea ice – if there would not be sea ice or the sea ice would be too thin, seal hunting would be greatly hindered. In year 2013, there were less than 1800 people living on traditional livelihoods and the amount is decreasing rapidly. Sea ice is also an important component in Greenlandic mythology, and it provides a leisure element. After all, sea ice is not only important from a climatic perspective but also from a cultural one. 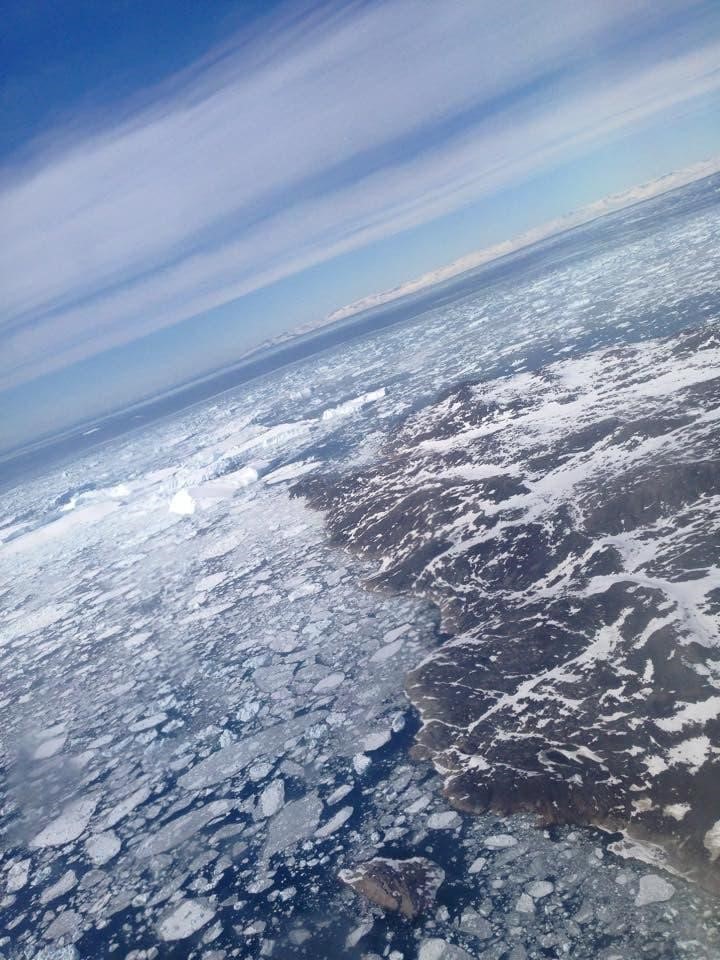 Climate change is a pressing issue that can vastly affect the sea ice extension.  Sea ice is regarded as an important aspect of nature to the Greenlandic society, which immediately leads to the necessity of protecting the sea ice.

This project focuses on the hypothesis that local human activity can enhance sea ice loss/thinning at least at a local scale.

Life cycle assessment (LCA) studies the impacts that human activities pose on humans and the environment. This is done in such a way that the impact of individual products or services can be assessed, and so, this methodology can be used as a helping tool to make educated choices on different alternatives.

LCA provides a framework to quantify impacts under different impact categories, which in the end aims at holistically assessing the impacts of products and services. This framework does not yet consider sea ice loss that is not directly derived from climate change, but from human actions.

The goal of this project is to initiate a debate from which sea ice loss could arise as a new impact category to be covered on LCA cases from the Arctic region. In order to do so, the EU recommended DPSIR (Drivers-Pressure-State-Impact-Responses) approach is used. Roughly summarised, major economic or societal drivers exert pressures to the system which change their state in such a way that produces an impact. As a result of this impact, responses may appear altering any of the previously given components, thus modifying its outcome in an iterative process.

Under this approach, an LCA impact pathway is built by defining its four first elements (Drivers-Pressure-State-Impact), so that an outcome from a certain human activity can be translated into impacts to humans and the environment. Responses are left aside from this analysis as they greatly depend on political factors that are not meant to be included under LCA methodology, which is in the end a tool designed to assist decision making. 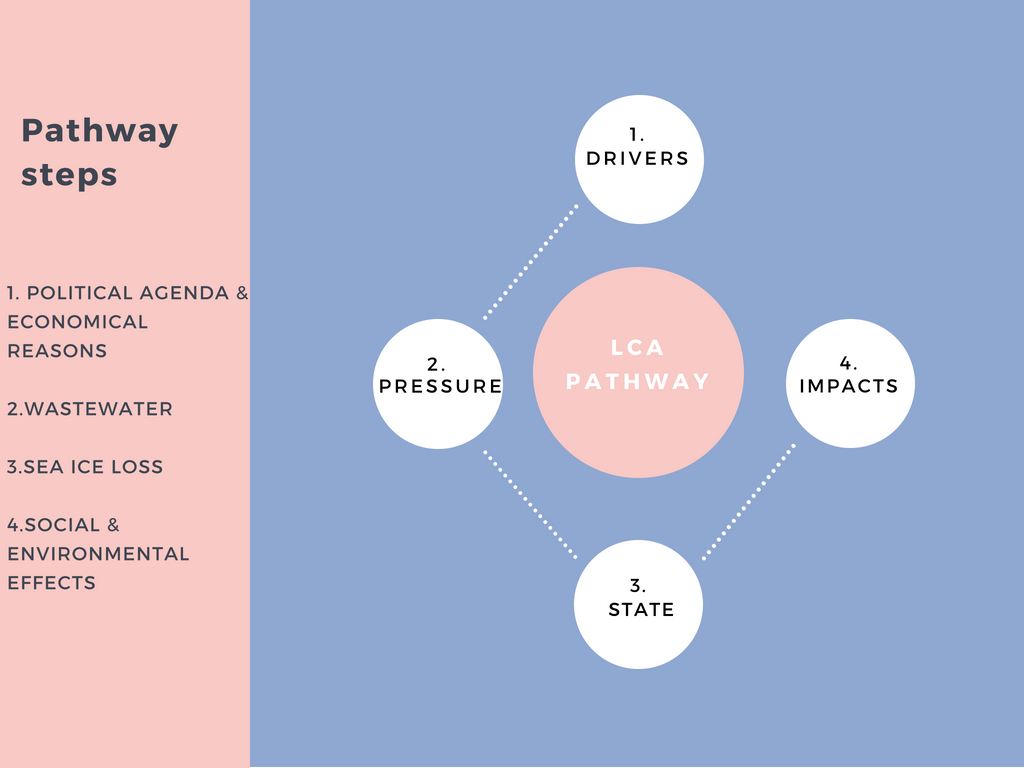 On the left hand side, the panel describes steps for the Arctic sea ice loss. LCA pathway steps are represented on the right hand side.

Human activity in Greenland is mainly located in coastal areas, mostly focalised within its numerous fjord systems. There are several economical, political and societal factors that are expected to drive an increase of the human activity through coastal Greenland:

All of the above points will to a greater or lesser extent contribute to an increase of human activity in Greenlandic coastal areas. An immediate effect that can be derived from such a prediction is an increased production of wastewater.

Wastewater streams in Greenland are directed into the sea, with none or close to none treatment. This is due to the very sparse distribution of population, which makes it very difficult to build treatment plants that are worth the effort – and this without mentioning the difficulties of wastewater treatment at -50 ºC.

Apart from chemical pollution or nutrient excess, wastewater streams being poured into the sea can account for thermal pollution due to temperature differences between both water systems. This effect, depending on the temperature and the streamflow of wastewater, could potentially lead to local loss or thinning of the sea ice layer.

As a result of the pressure from incoming heat from wastewater into the sea, the sea ice could melt completely, or decrease in its quality (i.e. thinning to a dangerous extent where it is not possible to stand on it anymore), mostly at a local level in the area surrounding the effluent. This effect would be combined with an already existing warming Arctic due to climate change, and thus possibly magnify its consequences, especially in those limiting areas where the sea ice has been retreating the most over the past years.

The relevance that the sea ice has within Greenlandic culture was already emphasised to provide a rationale based on which it is desirable to consider it as an element in nature that should be protected. However, this fact does not comprehend the whole nature that its loss might signify, and so impacts are further categorised as social or environmental:

Sea ice in Greenland is an element of nature that is receding mostly due to climate change and its warming effect in the Arctic. Increased coastal human activity could further boost this effect.

A proposal to update LCA methodology with a new impact category covering sea ice loss due to human activity has been studied. This update could be important in order to provide comprehensive information to decision-makers in relation to projects that would increase substantially coastal human activity, such as mining sites.

The impact of the sea ice loss has been tracked following the DPSIR approach. On this basis, several economic, political and societal drivers have been found that could lead to an increased coastal human activity in Greenland, from which increased wastewater streams could lead to heat pollution in the sea leading to sea ice loss.

Sea ice loss impacts have been studied from a social perspective by means of interviews, to ponder how valuable sea ice is regarded by local communities. Environmental effects of sea ice loss at an ecosystem level have also been explored.

Further work is required in order to incorporate this newly described pathway into LCA methodology, such as the definition of quantifiable magnitudes of emissions and their effects on sea ice, which could go on the direction of quantifying heat content in wastewater  discharge.

The work produced under this project could easily be extrapolated to other arctic communities where sea ice is present and so plays an important role on its livelihoods and ecosystems. 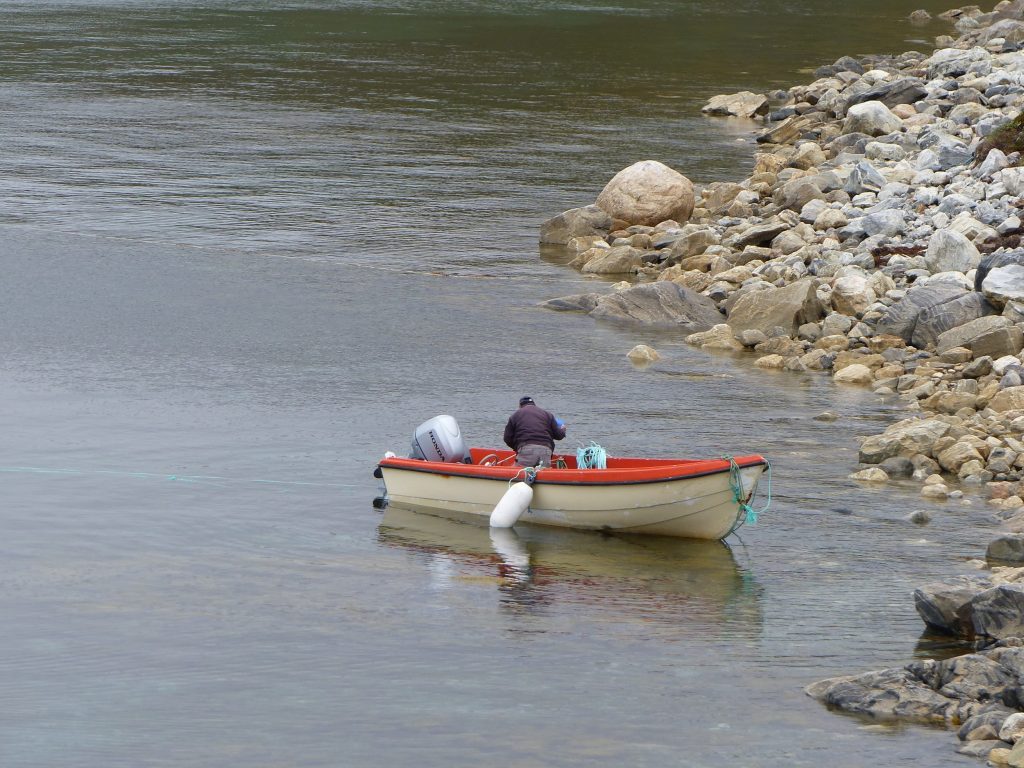