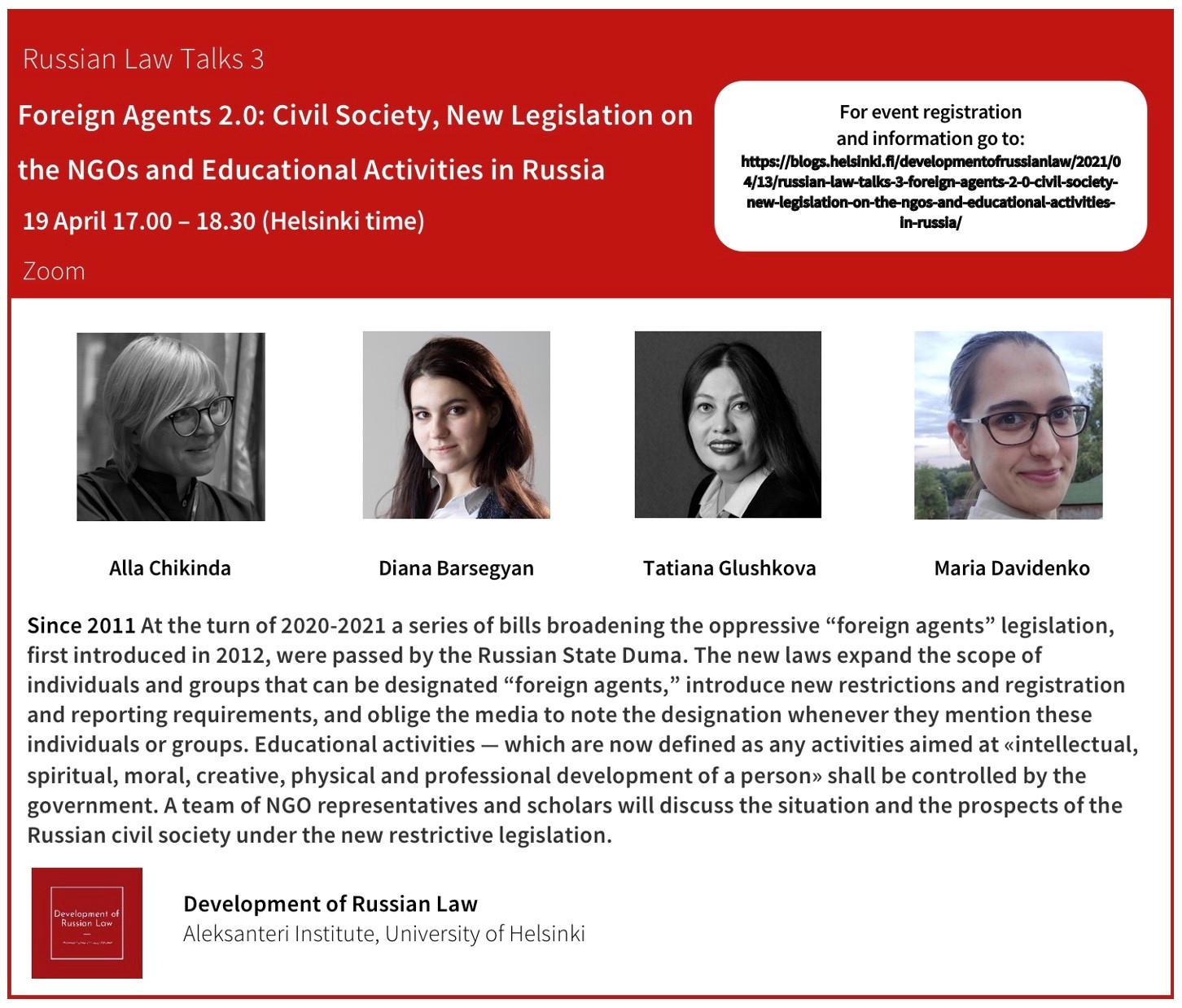 The original description of the event:

At the turn of 2020-2021 a series of bills broadening the oppressive “foreign agents” legislation, first introduced in 2012, were passed by the Russian State Duma. The new laws expand the scope of individuals and groups that can be designated “foreign agents,” introduce new restrictions and registration and reporting requirements, and oblige the media to note the designation whenever they mention these individuals or groups. Educational activities — which are now defined as any activities aimed at «intellectual, spiritual, moral, creative, physical and professional development of a person» shall be controlled by the government.

A team of NGO representatives and scholars will discuss the situation and the prospects of the Russian civil society under the new restrictive legislation. 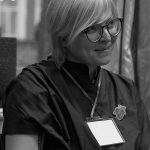 Alla Chikinda is a communications manager in Resource center for LGBT based in Yekaterinburg, Russia. It is one of the strongest local LGBT organisations in Russia, working since 2014. Alla is responsible for external communications, notably with the media on local, national and international level, as well as potential partners and allies for Resource center. In 4 years Alla has established strong links with many well-known media and ensured that every year there are over 150 mentions of Resource center in various sources. Among the media outlets writing about the work and achievements of Resource center are Novaya gazeta, Takie dela, Radio liberty, Meduza and BBC Russian service. Ms Chikinda has also contributed to the visibility of Resource center among NGOs in Yekaterinburg and its region, taking part in and organising various  talks, podcasts and other public events. 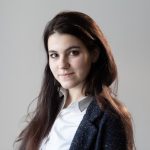 Diana graduated from The Russian State University of Cinematography with a degree in screenwriting in 2018. She became an employee of the ‘Nasiliu.net’ Center in the summer of 2020. During her work, she participated in organizing discussions for experts in the field of domestic violence, organized awareness campaigns about the problem of domestic violence,  participated in a promo campaign related to the release of the center’s own clothing line. Diana took part in the filming of a video about gender equality ‘Girls are such girls’, the video can be seen on the Center’s YouTube channel. Diana also regularly communicates with journalists on behalf of the Сenter: during her work she gave comments or interviews to dozens of newspapers and magazines. 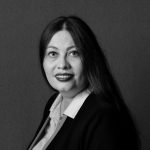 Tatiana Glushkova holds a degree in law from Lomonosov Moscow State University (2011). She works as a lawyer at Human Rights Centre “Memorial” (Moscow, Russia). In this capacity she represents applicants before the European Court of Human Rights in cases brought against Russia on matters including right to life, freedom of expression, freedom of assembly, right to respect for private and family life, right to non-discrimination. Tatiana engages in international advocacy before the UN and the Council of Europe bodies. In 2018 she was elected as a board member of HRC “Memorial”. 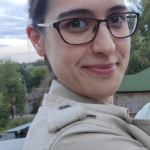 Maria Davidenko is an Assistant Professor in the School of Sociology at Higher School of Economics (Moscow). Her research interests include gender inequality in organisations, state-civil society relations, and non-state actors’ participation in policymaking. Maria’s current research project examines possibilities and limitations for participation in policymaking for Russian NGOs working with the issue of domestic violence. Maria is also a member of a project group “Women and gender in public administration” (at HSE) that organises seminars and carries out research on gender segregation in public service as well as problems faced by women who seek to climb the career ladder in public administration, including gender stereotypes, the need to balance work and family responsibilities, and sexual harassment at work.