Especially the general negotiation skills -course fits well to various disciplines, as well as for supplement education. Many of the existing virtual courses lack pedagogic aspects, methods and meaningful content. Regarding previous research, these things are some of the biggest barriers for making virtual courses useful. This particular problem is one of the challenges Mixed Reality Hub started to solve. With many years of experience from the field and with an iterative research & development -approach, a whole new concept of virtual course is made. This article will give an insight to the methods used to conduct the courses.

Mooc, VR and training in practice
VR-course has three components: MOOC Massive Open Online Course)-phase, VR (Virtual Reality)-phase and training in practice -phase. During the MOOC-phase, student are able to watch videos from real-life negotiation situations. Videos include negotiation situations from every-day situations in startups to large meetings in big private sector companies. Cases are selected so that they supplement each other, and that every student could have a situation which gives something new to them. Videos are recorded with a 360-camera, and they are analysed by professionals. Professionals will narrate the videos by telling notions and conclusions based on previous studies and theories. Video 1 has a real negotiation situation made for demo purposes. There, people from two different universities discuss about student exchange and the recruitment of students to the research projects. On the Table 1, theory-based notions from the professionals based on the Video 1 are presented.

Table 1. Theory-based notions from the professionals based on the Video 1.

Video 2 was made based on the Table 1. There, a VR-environment made by Zoan, a VR-studio from Finland, is showcased. In the VR-environment, users can move, interact, draw and import 3D-models, videos, 360-pictures and 360 videos.  In addition, users are able to record their voice and action as an avatar.  This recording can be then viewed through VR-glasses or it can be exported as a normal video.

Video 2. VR-environment used in the course.

A demo using the aforementioned system where conducted with students from the Faculty of Educational Sciences at the University of Helsinki as a part of the Luovaope-project. The structure of the mini-course was the following:

9.15-9.30 Introduction to the course and VR-environment

9.30-10.00 Trying out the virtual course with VR-glasses. Students waiting for their turn can see the experience from a desktop screen. kokeminen yksilöllisesti VR:ssä. After experiencing can discuss about their experiencing and make notes.

10.00-10.30  Scripting , rehearsal and recording of own negotiation situation, recorded with a 360-video camera.

10.45-11.30 Listing own notions and conclusions and rehearsing the making of the recording inside the VR-environment.

11.30-12.00 Watching the 360-videos from both groups, presenting the notions and conclusions. One member of the group is inside the VR-environment, pauses and plays the 360-videos, and presents the notions and conclusions made by the whole group. General discussion about the situation and possibilities of the use of VR in education settings. Presenting the post-course questionnaire.

As written in the schedule, the course progressed as following: First, everyone watched the pre-recorded negotiation situations and made notes about it. After this, group was formed and the group selected freely the negotiation situation they want to make. Based theories, previous knowledge and notions and conclusions from the professional, group started to design their negotiation situation. Every member of the group was assigned with a role. Roles were based on the Table 1 Columns (chairman, woman and man with a Levis shirt). For example, in one group, one member was a principal of a primary school (chairman), which lead the discussion with the teachers (woman and man with a Levi shirt). There were 5 members of the group, so two more roles were invented. When the group finished rehearsing the situation, they made a recording with a 360-video camera. After this, a coffee break was held while the 360-video was rendering. Then, the 360-video was played and analysed in parts. When the video was analysed, the group began to make the VR-recording of the situation: the 360-video was imported to the VR-environment, and one member of the group started to make the recording. Other members of the group aided the process. On the Video 4, an edited version of the recording made by students can be seen. 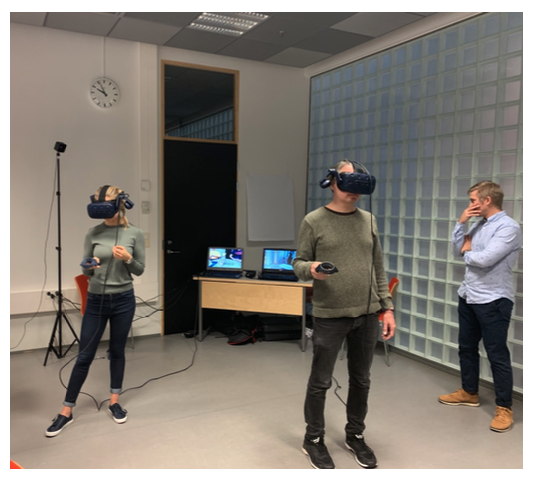 Picture 1. Participants of the course.

Video 3. Negotiation situations made by students (roles and opinions are not real) (in Finnish).

Video 4. 360-video from the negotiation situation, where students recorded their comments in the form of avatar (in Finnish).

Future of the course
The demo day was a success. The iterative development of the course and VR environment continues. Feedback was gathered from the students using a post-course questionnaire. The base of the questionnaire was the CATS-questionnaire (Cognitive Affordances of Technologies Scale), which Mixed Reality Hub has tested and developed with professor Dabbagh (George Mason University, USA). The questionnaire will be used in the other courses made under the same project (Luovaope) in the Faculty of Educational Sciences. Other courses of the Luovaope-project can be divided onto the following: 1) online-course, including text-based tasks, done alone 2) online course, including video-based tasks, done alone and 3) online-course, done in small groups. From the results of the questionnaire, we can see preliminary results on how different online- and virtual-courses should be modified so that the strengths of each technology could be used in its full potential.

Table 3. The main themes of the questionnaire (Cognitive Affordances of Technologies Scale).

Think about the learning method/environment used. How it made the following things possible: