The coronavirus pandemic will have long lasting impacts on the conservation of biodiversity and protected areas. In many Nordic countries, people have been visiting green areas, protected areas included, more than ever. In the Global South however, the situation is almost the opposite, putting conservation at risk. In many developing countries, nature-based tourism has been important for financing biodiversity conservation. Tourism to protected areas has, however, ceased drastically during the global confinement strategies. The consequences of vanishing tourism are very visible for example in Madagascar, one of the world’s biodiversity hotspots, with the highest number of threatened species globally. While being rich in biodiversity, Madagascar is economically among the poorest nations in the world. Madagascar currently has protected 7.5 % of its terrestrial land area, but this protection relies on funding from abroad. Previous research (Eklund et al. 2016 & Eklund et al. 2019) have shown that the protected areas have the capacity to curb deforestation, but funding is needed for the maintenance of conservation actions.

In Madagascar, tourism contribute to approximately 30 % of the annual income of the protected area agency Madagascar National Parks (MNP). MNP is managing some of the most visited national parks in the country. Due to the pandemic there have been concerns raised that the loss of tourism revenue could make the protected areas more vulnerable to illegal encroachment, such as poaching and deforestation. Both Mongabay and National Geographic have reported about these concerns recently. So far the concerns have been based on expert opinions and anecdotal evidence. In this writing, we provide evidence that the protected areas in Madagascar are experiencing rapid increases in human induced fires during the corona crisis.

The corona virus pandemic hit Madagascar on March 20, 2020. The government stopped international flights on the same day and shut down the country’s three major cities (Antananarivo, Toamasina and Fianarantsoa). Protected areas have been closed for visitors since March 23rd 2020. The lockdown has been partially lifted since April 20th, but the protected areas remain closed from visitors.

We used satellite based data on active fires made openly available by NASA to see if there are signals of increased human activity inside the protected areas.  This type of data has previously been used as a proxy for human caused bushfires (Nolte & Agrawal 2012). We were interested to follow temporal trends and investigate which areas are most affected. The aim was to provide a tool that can be useful for protected area managers. For a more detailed report on methods, see the end of the blog post.

We stress that the figures presented below are tentative results from an initial inspection of the data. The analyses are ongoing and we will follow the trends during the coming months to get a better understanding of the long-term effects the pandemic has on protected areas.

What do we see? 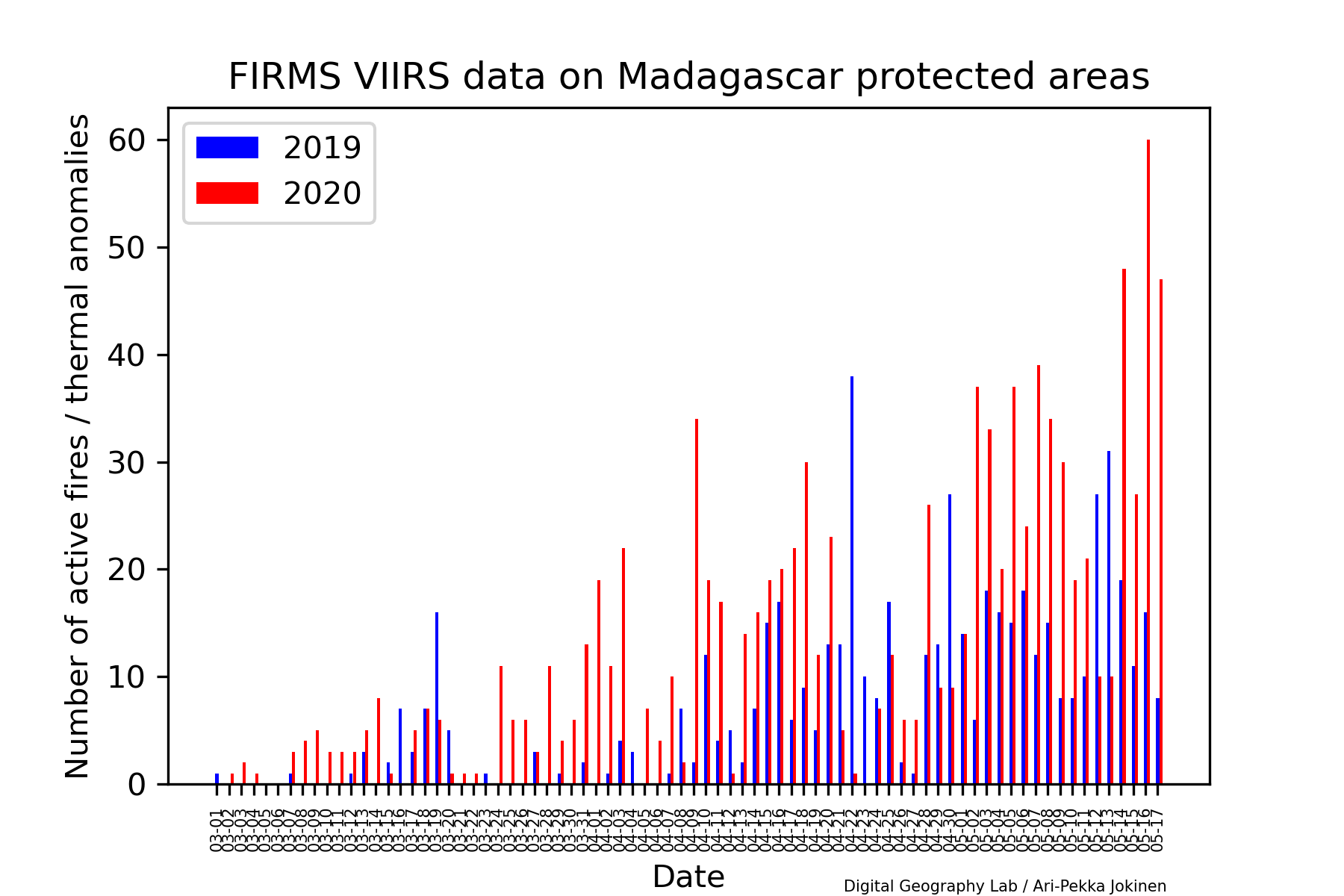 Figure 1. Number of active fires/thermal anomalities (normal and high confidence) inside protected areas in Madagascar for March 1- May 17 for 2019 and 2020. 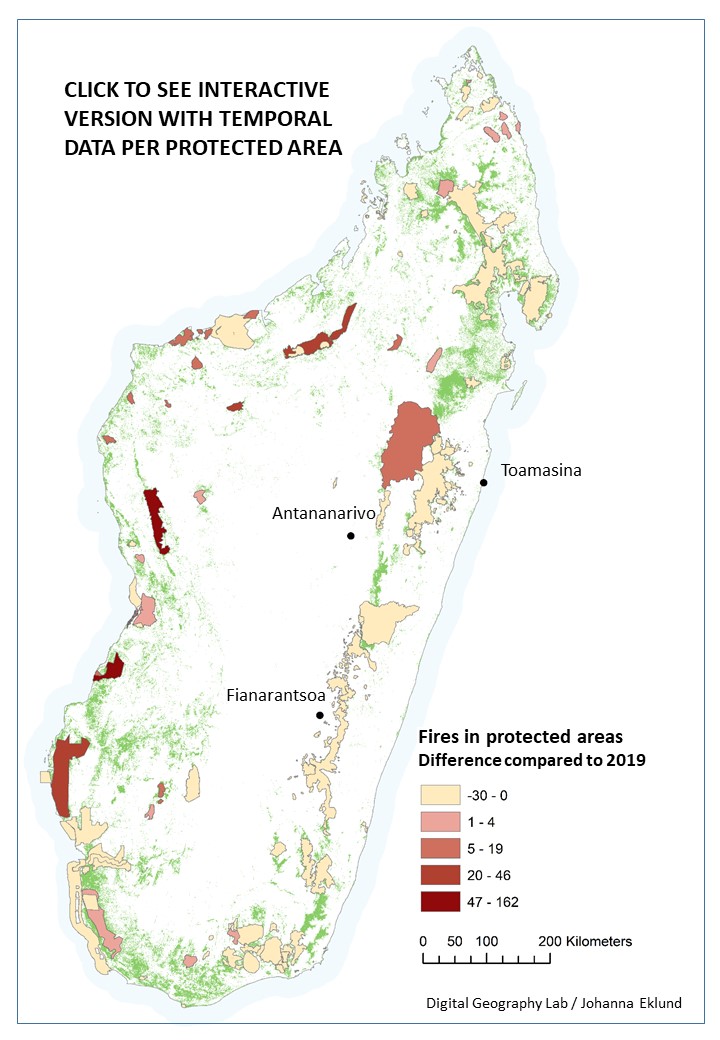 Figure 2. Map of Madagascar and the terrestrial protected areas. Graduated colours show the difference in fires this year compared to the corresponding period in 2019 (March 1- May 17). By clicking on the map you will be taken to an interactive version with more detailed information about the temporal trends for each protected area. NOTE: Opens best in Firefox or Chrome on a desktop https://blogs.helsinki.fi/digital-geography/files/2020/06/folium_map.html

What does this mean?

Our preliminary results show clearly that the COVID-19 pandemic has affected the protected areas in Madagascar and the human pressures have increased. It is clear that the protected areas in the Western dry forests of Madagascar are the most affected so far. Fires are commonplace in Madagascar even during normal times. People often burn and clear land to plant crops before the start of the rainy season that runs from November to April. The fires usually appear in July, but this year they have started to increase early. Of the nine hardest hit protected areas, especially Tsingy de Bemaraha has been popular among visitors. According to MNP, Tsingy de Bemaraha was the fifth most visited park in the country last year. The dramatic increase of fires in Tsingy de Bemaraha could well be related to the loss of tourism revenue, meaning that people now have to rely on the land instead. The fires in the park extend all the way to the interior, not just around the borders. Ankarafantsika National Park was severely hit by fires last autumn and MNP was calling for international help to manage the fires already then, according to Mongabay. This makes the increased burning this year very troublesome. Bongolava, adjacent to Ankarafantsika national park, has had uprisings before, where farmers have demanded their right to grow corn in the area (Mongabay).

In conclusion, it seems the COVID-19 pandemic has caused an increase in bushfires inside the protected areas. To what extent this can be traced to the lack of tourists and the loss of tourism generated income is still unclear, but the tools developed will allow us to follow the long-term impacts of the crisis. Historically, many of the Malagasy living around protected areas have compared conservation organizations and tourists to the previous colonial masters, claiming the land for the benefit of outsiders. Efforts have been made to convince the locals that protected areas can bring alternative livelihoods and that they can profit from keeping nature intact. With tourism revenues now gone, it is easy to understand that some must feel betrayed by this promise.

This is ongoing work and we will continue to track the situation during the coming months. We will use the average of the last five years as a baseline, and not just last year as in this blog post. The development work will continue in collaboration with Madagascar National Parks and Forum LAFA, the network for terrestrial protected area managers in Madagascar.

We used NASA´s Visible Infrared Imaging Radiometer Suite (VIIRS) Corrected Reflectance Imagery data to detect signals of potential fires in the protected areas of Madagascar. VIIRS data is available on a daily basis and is therefore suited to explore time trends at fine resolution. We compared the active fires this year to the corresponding time last year. In our analyses we included the fires that were of high or normal confidence and omitted those that could have been other bright reflections than fires. We included the terrestrial protected areas listed in the Protected Planet Database for Madagascar. Some of these areas might not yet have full designated status, but were included to track trends also in proposed protected areas. We did not limit our analysis to only forested areas, but included fires in all land-use types.

The Digital Geography Lab at the University of Helsinki is an interdisciplinary research team focusing on spatial big data analytics for fair and sustainable societies. See previous blog posts about the effects of COVID-19 on mobility patterns in Finland here and here.