According to Statistics Finland (2018), there are more than half a million summer cottages around Finland. They are mostly located in rural areas close to waterbodies – lakes and seaside. In a country with 2.7 million households, such a high number of cottages may change the population patterns drastically once people would move to their cottages in large numbers. This is a potential risk during the epidemic outbreak such as the COVID-19 – health care services are designed mostly based on the permanent population and the cottage dwellers might break the balance in sparsely populated areas. Our preliminary findings already indicated that despite travelling restrictions due to the COVID-19 outbreak in Finland many people escaped from big cities to their summer cottage, see here. But was it really the lure of the summer cottages that explain the mobility patterns to more rural countryside?

Findings: We compared the change in the number of people in municipalities and the relative distribution of summer cottages. We found a strong proof that urban dwellers did escape to their summer cottages amid the COVID-19 outbreak. Mobility flows to summer cottages started already after the first official guidance on 12th March, and people were in their second-homes already before travelling restrictions were made official by the government. Data indicates that on average some 370 additional people for every 1000 summer cottages in a municipality arrived to a municipality towards the end of March.

To analyse the phenomenon further, we chose six municipalities for further analysis. All of these municipalities are rich in summer cottages and showed increasing number of dynamic population during the COVID-19 outbreak. We analysed the flow of people using aggregated and anonymized trip data (see above).

The mobility flows show varying geographical catchment areas for different municipalities, indicating also different risk levels of potential virus spreading outbreak. Municipalities in Central Finland received people from more diverse directions, whereas in coastal areas and closer to country border origins of mobility is more concentrated to close by municipalities or other shoreline locations. Thus, from the perspective of human mobility, summer cottage areas in the central parts of the country play stronger mediating role for virus transmission between different regions in Finland. 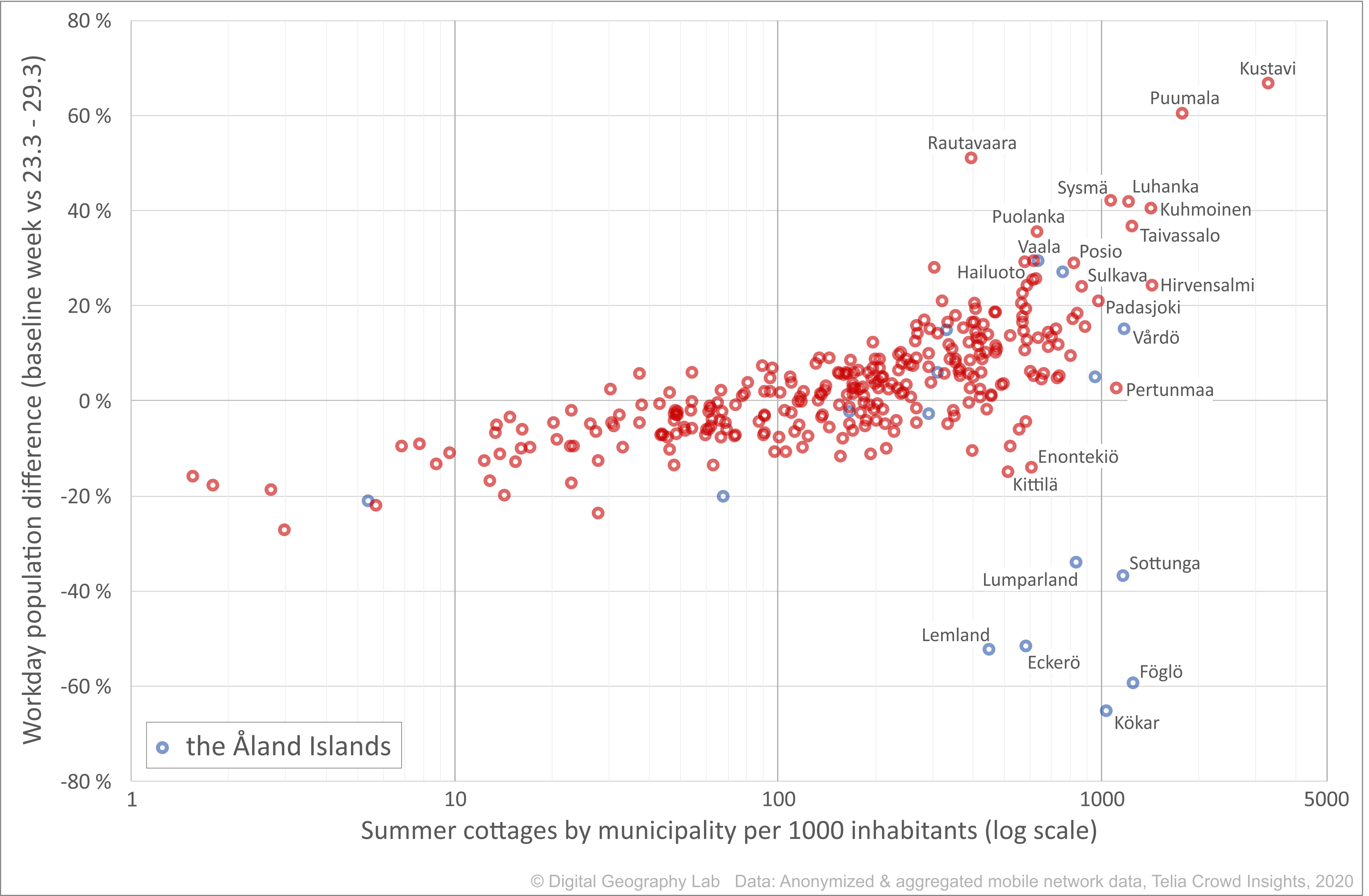 Figure 2. Temporal dynamics of temporary population compared to the baseline working days (average from Mon 3.2. to Thu 6.2.) in case of six well-known ”summer cottage” municipalities in Finland. In addition to typical weekend visits to summer cottages, people stayed there also during the winter holiday season (15.2-8.3). After just a couple of typical workdays people started to move back to their summer cottages since Thursday (12.3.) regarding the COVID-19 outbreak, but with much higher volume. 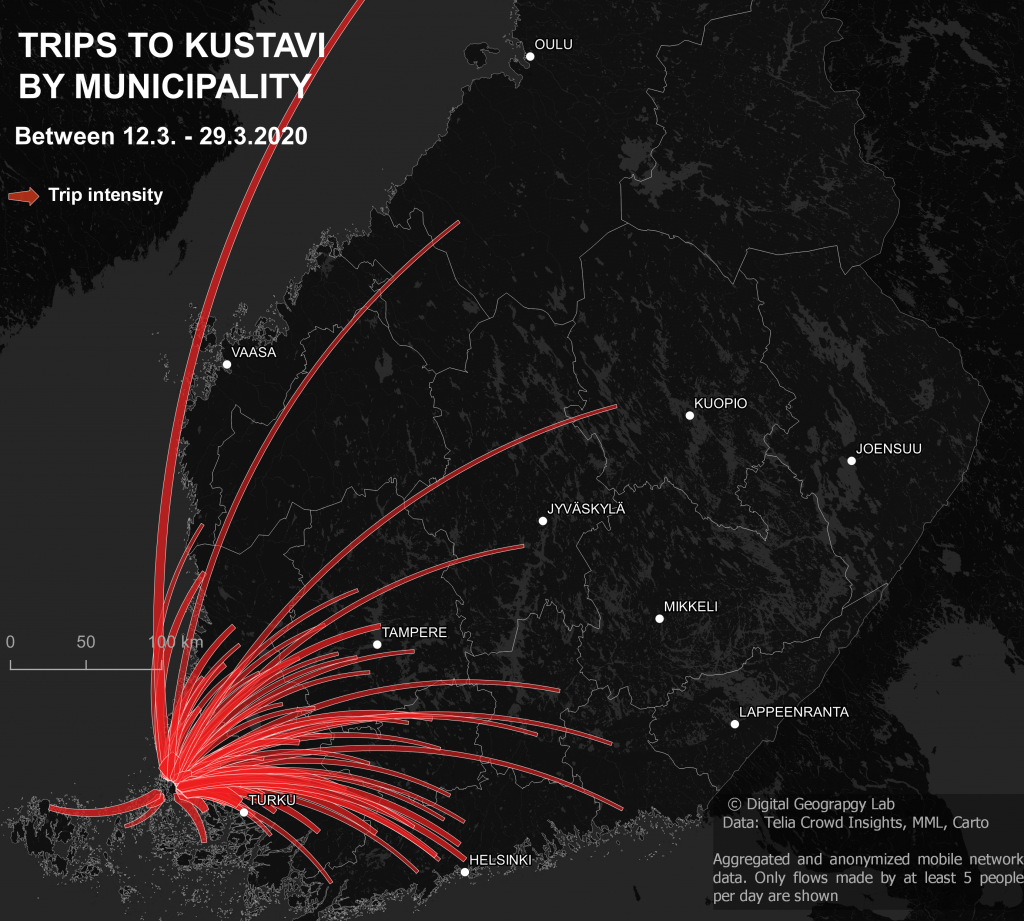 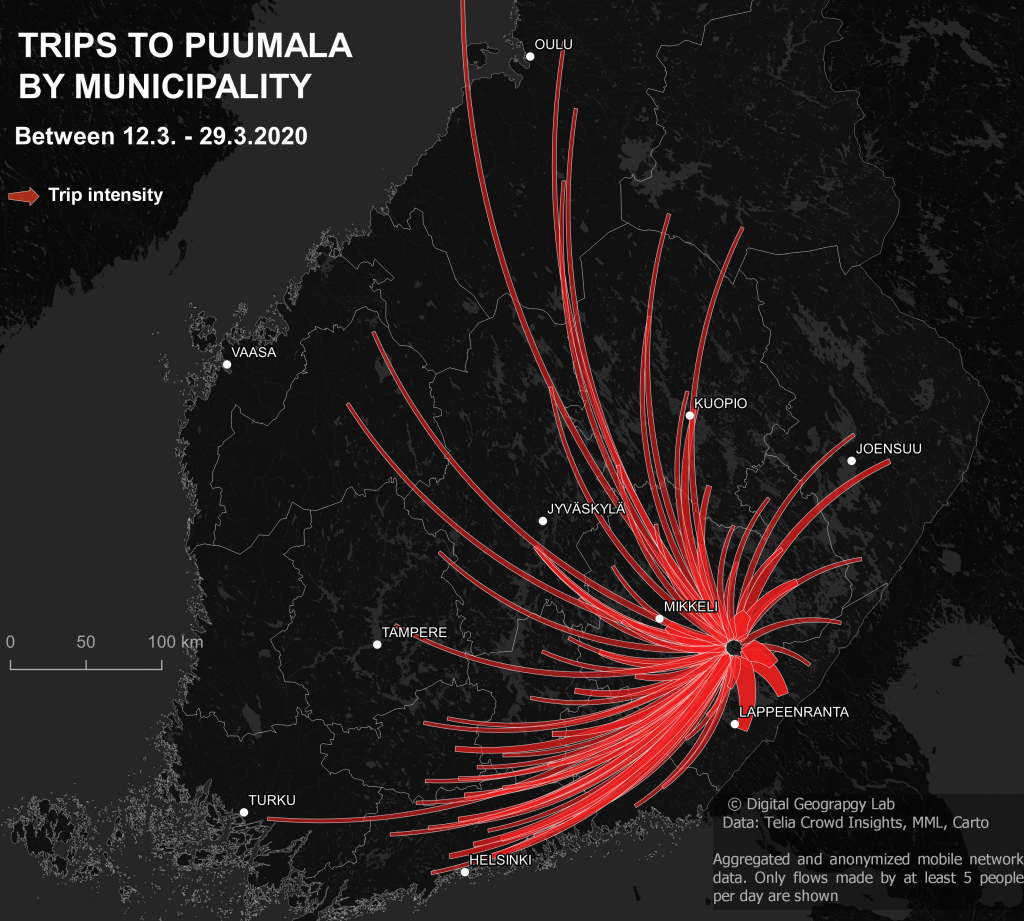 Figure 4. Three different geographical tales of human mobility to popular summer cottage municipalities in Finland: 1) Sysmä, 2) Puumala, and 3) Kustavi. The maps show the geographical catchment area of each observed municipality. In each selected municipality, most people arrive from the close neighboring municipalities; however, these also attract people widely from different parts of Finland. 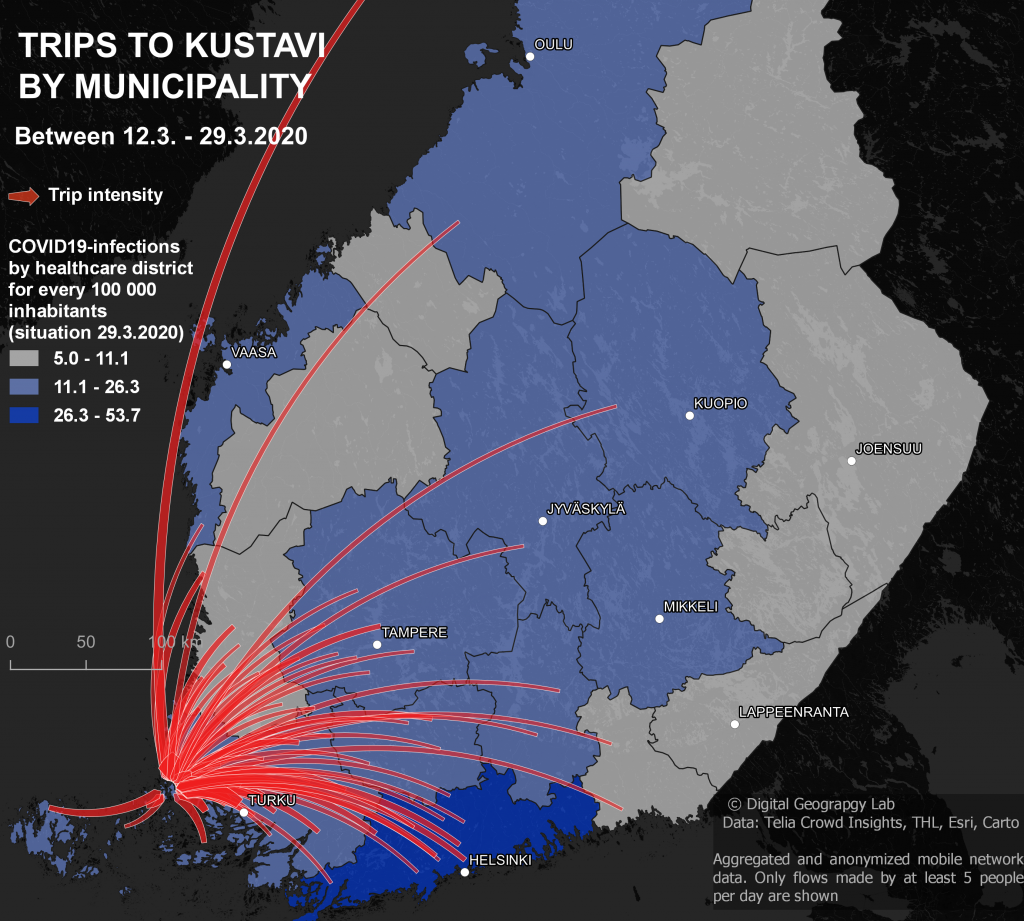 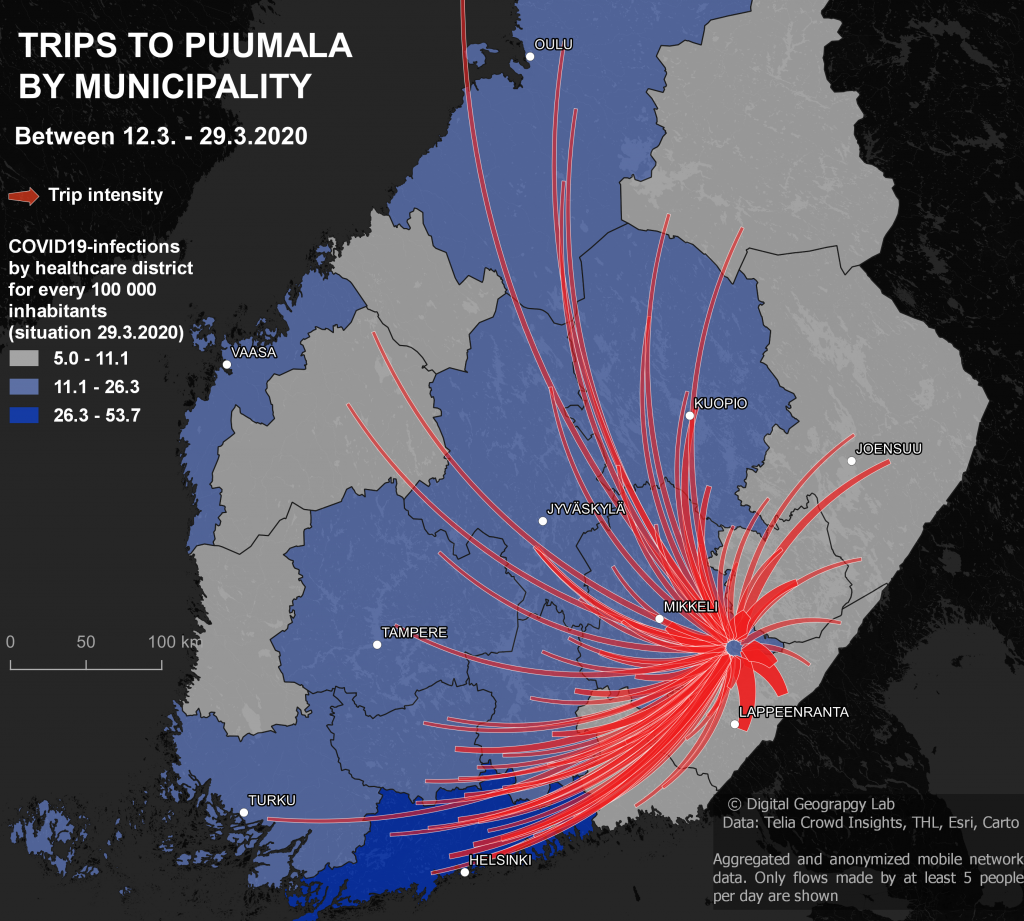 Figure 5. Mobilities to Sysmä, Puumala, and Kustavi in the context of the COVID-19 infection situation. The mobility flows reveal varying geographical catchment areas for different municipalities, which also can indicate different risk levels of potential virus transmission for different municipalities. For example, Uusimaa region in South Finland (including the Capital of Helsinki) has been the hotspot of the COVID-19 outbreak in Finland and had the highest infection rate per 100 000 inhabitants at late March 2020 (data by healthcare districts in 29.3.2020). Considering all trips to a municipality between 12.3 – 29.3, only 13% (Sysmä),  9.5% (Puumala) and 7.3% (Kustavi) were from Uusimaa.