For ZOOM Link Register HERE at least a day before the event. You will receive the zoom link an hour before the program begins.

The human coffee room combines methodological praxis of the arts, humanities, and biological sciences, to investigate the ethics of bodily mechanisation and faecal commodification as endured by Asian palm civets (Paradoxurus hermaphroditus), the producers of the famous civet coffee. Civet coffee (often known by its Indonesian name “kopi luwak”) is a coffee with an international reputation as the rarest and most expensive coffee in the world (Marcone, 2004). Prized by coffee partisans for its exclusivity, civet coffee reaches prices of up to ~€240 per kilo (Muzaifa, Hasni, Patria and Abubakar 2018). Civet coffee’s unique taste is said to be acquired through the enzymatic processes which occur when coffee cherries pass through the civet’s digestive tract. Yet with increased consumer demand has come increased profit margins as humans have taken to capture civets for mass civet coffee production. Civets are thus mechanized in a mouth the anus production line.

Whilst multispecies scholars often advocate for “becoming with” their non-human interlocutors (Altvater et al., 2016) in a bid to move beyond anthropomorphic, and thus anthropocentric, interpretations of the non-human world (such as Kohn 2007), becoming with animals enmeshed in exploitative systems involves more challenges of separation than is presented merely by taxonomic class. Not only does civet coffee occur in spaces hidden from public view, witnessing alone presents its own ethical issues. Through the act of spectatorship researchers can themselves become unwitting participants within Foucauldian biopolitics of bodily control and surveillance. In such cases, the researcher remains separate from the animal whom they seek to understand whilst integrating themselves into the anthropocentric hierarchies they may intend to contest. It was upon these ethical and methodological considerations surrounding our interest in the mechanization of civet bodies for civet coffee production that the Human Coffee Room emerged.

This research applies a transdisciplinary and transnational approach between visual artists, anthrozoologists, and biological scientists to problematize the acclaimed status of civet coffee, its methods of production, authentication, and economic worth. Firstly, attempting to gain an embodied perspective of animal mechanization, we used our own bodies to ‘become with’ our civet informants. By adhering to the same procedure as civet coffee production, we created 80g of human digested coffee. Secondly, we followed the scientific protocol utilized for civet coffee authentication, in which we examined samples of our product using scanning electron microscopy, the results of which we then compared to previously published findings for civet coffee. Our results illustrate the complexities involved in multi-species world making whilst highlighting the significant ethical issues surrounding digested coffee production and the flawed process of authentication. Finally, in selling our product on the open market, we have revoked civet coffee’s claims as the most expensive coffee in existence[1].

First presented as part of the Harrie Liveart solo exhibition dubbed by critics as “artistic research at it’s best”, we propose to bring the Human Coffee Room to the virtual realm of Environmental Humanities Month. We propose the presentation of a 15 minute video performance detailing the embodied perspective gained through the world-making potential of our digestive tracts, a 1 hour seminar exploring our scientific research findings (to which our academic paper is currently in press).

An over-view of the collective project Embodied Perspective (including images taken from the video performance): https://www.thecivetproject.com/embodied-perspectives 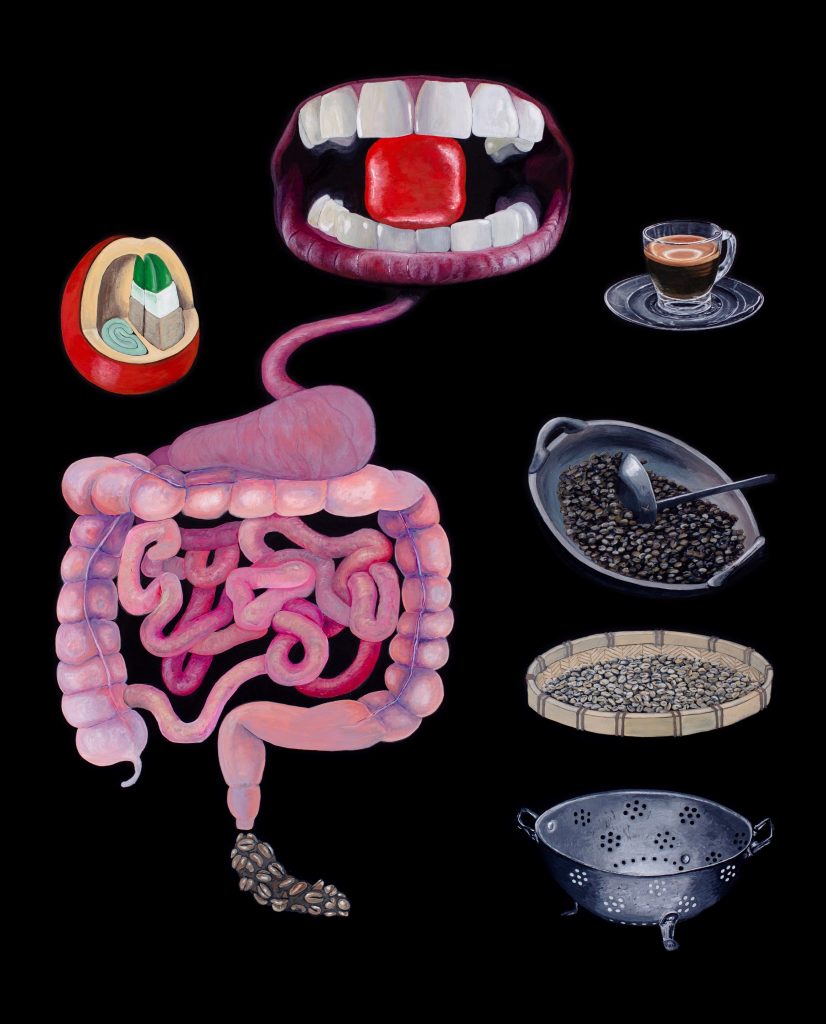