The FoundLaw project, in collaboration with the Oulu Centre for Theoretical and Philosophical Studies of History, is organizing a “Conceptual Change in History” conference at University of Helsinki, September 22-24, 2016. Keynote speakers of the conference are Theodore Arabatzis (University of Athens), Jaakko Husa (University of Lapland), Sinai Rusinek (Van Leer Jerusalem Institute), Benjamin Straumann (New York University), and Paul Thagard (University of Waterloo). The conference is open to the public and there is no registration fee. If you wish to attend, please send an e-mail to foundlaw@gmail.com by September 14th, 2016. For more information, see the event page.

Dr. Tommaso Beggio will give a lecture, titled “Paul Koschaker und die Reform des romanistischen Rechtsstudiums in Deutschland”, on May 10th, 2016. The lecture is organized by Die Heidelberger Rechtshistorische Gesellschaft and will be held at the Institut für geschichtliche Rechtswissenschaft, University of Heidelberg.

The FoundLaw project, together with the Oulu Centre for Theoretical and Philosophical Studies of History, is organizing a conference, “Conceptual Change in History”, at University of Helsinki in September 2016. The three-day conference hosts presentations by keynote speakers and additionally invites submission for plenary papers. Please email submissions to Heta Björklund (foundlaw@gmail.com) by March 31, 2016. The maximum length of abstracts is 300 words. The language of the meeting is English. There is no registration fee. The organizers are unfortunately unable to aid in the travel arrangements or accommodation of participants. Please see the event page for details.

It is often suggested that historiography deals with change in time. If nothing ever changed, it would hardly make sense to do historical research. The nature of conceptual change has been an object of acute interest in recent years in the history and philosophy of science, cognitive science, Begriffsgeschichte, the history of ideas, legal history and other fields. Although a seemingly simple notion, the term ‘conceptual change’ hides a complex set of questions and problems.

First, ‘conceptual change’ may be seen to imply a number of different claims. It could mean a change of a particular concept or a replacement of that concept by another. It could also refer to the emergence of an entirely new concept. On the other hand, the reappearance, circulation and mutable application of alleged ´perennial´ concepts in historical writing would seem to undermine the idea of any abrupt ´change´ in conceptualizing history. Concepts operate within their intellectual context, where issues such as tradition have an impact within conceptual change and permanence. Especially in normative contexts such as law and legal tradition, concepts and their interrelationship take on a formative and constructive character.

One is consequently entitled to ask what ‘change’ is in history. Ultimately it is a question of how historians have understood invariance, change and replacement in their texts. It may appear that invariance is the prerequisite of variance. When we speak about a change of X, something would need to stay unchanged. If there is no invariance whatsoever, the case would appear to be that of a replacement of X, rather than of a change. The problem becomes visible when one tries to understand the emergence of an entirely new concept. Does it presuppose discontinuity with respect to the tradition that precedes it? Or does it rather imply continuity, as Collingwood suggested: “Any process involving an historical change from P1 to P2 leaves an unconverted residues of P1 incapsulated within an historical state of things which superficially is altogether P2” (An Autobiography, 2002, 141)?

Third, how should the concept of concept be understood in the context of historiography? That is, what is the anatomy of this tool of representation? On the one hand, many different philosophical traditions have put forward theories of concept, but often their notions appear unsuitable for describing changes in history. On the other, many schools of history deal with concepts, but they often define them only vaguely or assume implicitly. Thus it is necessary to ask, for example, what the relation of concepts to language is and whether they should be seen as atomistic units or as composable to smaller elements. In addition, contributions from educational science, neurobiology and cultural studies challenge historians to rethink whether concepts should be perceived as mental or social entities. Sociolegal studies have challenged the normative value and permanence of concepts and examined the way that change in political, intellectual and legal contexts is reflected in conceptual change.

Professor Rena van den Bergh (University of South Africa) will give a guest lecture on Monday, January 25th, 2016, at 4 pm. The lecture, titled “Communication and publicity of the law in Rome”, will explore how public policy such as law was communicated through the Roman empire, the means by which imperial letters, rescripts and laws spread via the road network and how this was affected by the spread of Roman citizenship in the provinces. The lecture will be held at the main building of Social Sciences (Unioninkatu 37), in the room number 1094.

FoundLaw’s post-doctoral researcher Jacob Giltaij will take part in a panel debate at the book launch of Revisiting the Origins of Human Rights (Cambridge University Press 2015) at Tiedekulma/Think Corner Porthania (Yliopistonkatu 3) on November 19th at 3 pm. The event will be livestreamed. 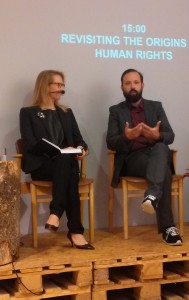 The project is joined by a new post-doctoral researcher, Dr. Magdalena Kmak. Dr. Kmak received her PhD from the Institute of Law Studies, Polish Academy of Sciences, in 2009. Previously she has worked as a university lecturer in international law at the faculty of law, University of Helsinki and as a researcher at the Erik Castrén Institute of International Law and Human Rights, University of Helsinki. Her current research focuses on the influence of exile on the development of law. Her research interests encompass exile studies and history of migration, public international law, human rights and international and European refugee and migration law.

Professor Pierangelo Buongiorno (Westfälische Wilhelms-Universität Münster) will give a lecture titled “”The ethics of a jurist”. Edoardo Volterra between the Palingenesia Codicis, the edition of the Senatus consulta and the Italian Fascism (1930-1945)”. The lecture will be held at the faculty room of Social Sciences (Unioninkatu 37, 1st floor) on Monday, May 25th, 2015, at 10.15 am.