The “Totalitarianism, Law and the idea of Europe” conference was a great success. The project wishes to thank all the participants for the interesting papers and thought-provoking conversations. 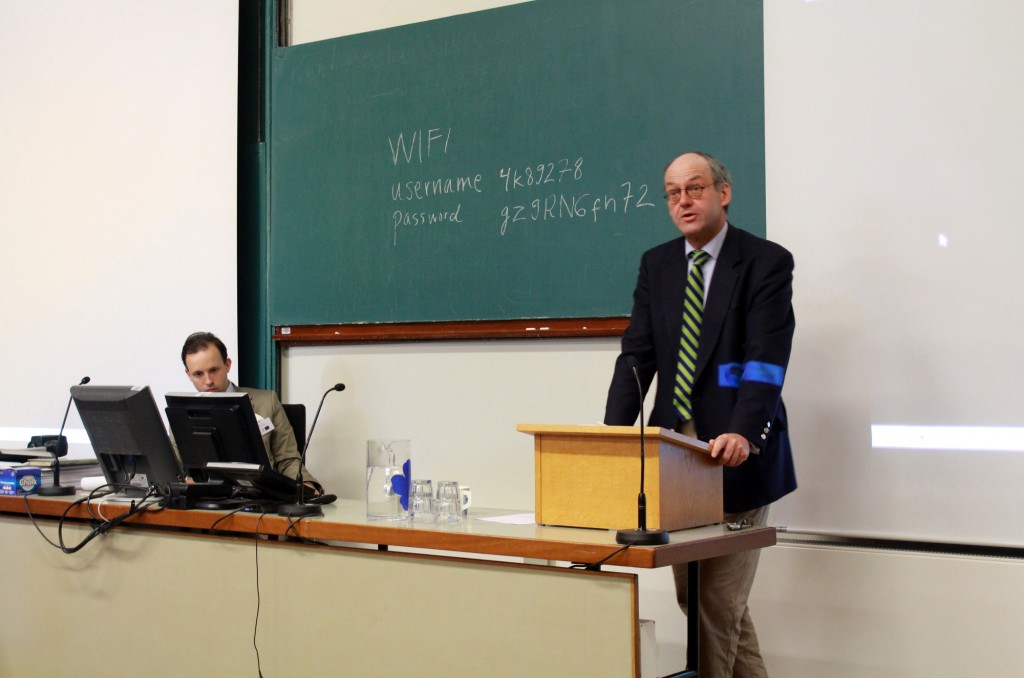 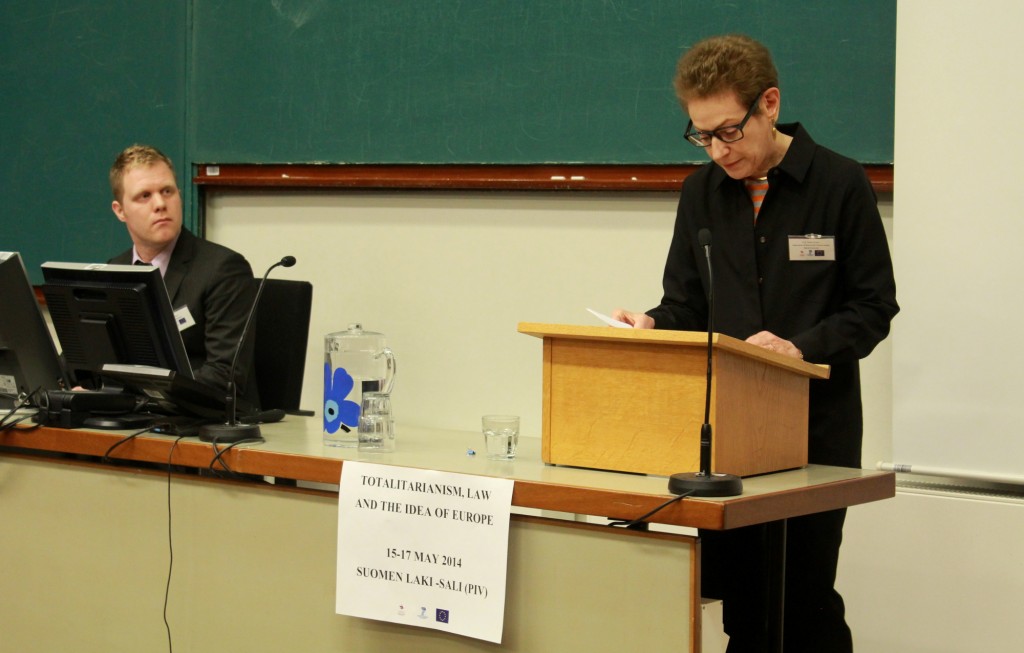 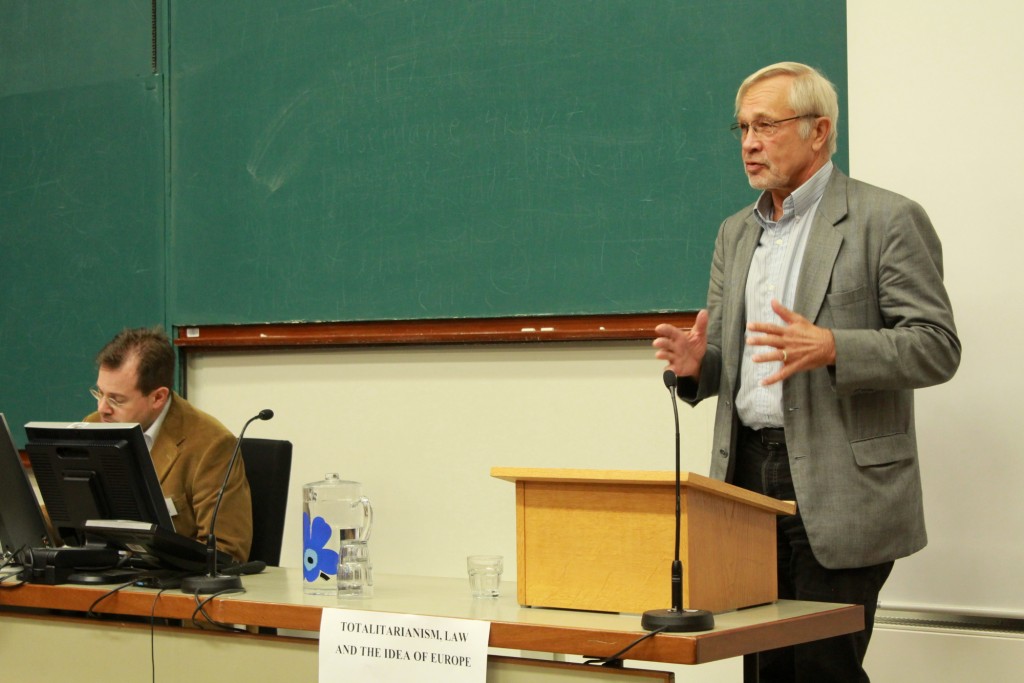 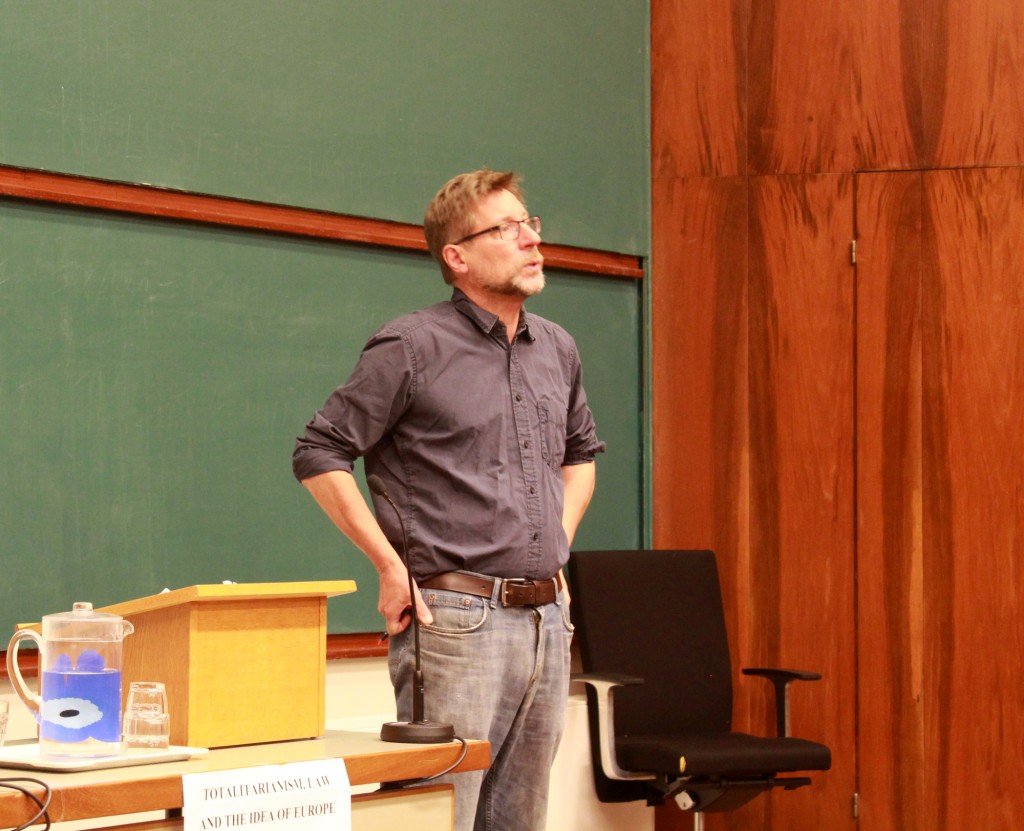 10.00-11.00 Keynote lecture
Chair: Kaius Tuori
Bo Stråth: The Social Dimension of Identity: an Ignored Connection. A Historical Perspective on the State of Europe and Its Nations

11.30-13.00 The Impact of Nationalism and Totalitarianism in Constitutional Discourse
Chair: Jacob Giltaij
Stephen Skinner: Law as Protection, Law as Power: Legal Certainty and Threats to the State in Fascist Italy and England in the 1920s-30s
Donal Coffey: Nationalism and European Constitutional Catholicism in the drafting of the Irish Constitution of 1937
Jukka Kekkonen: Civil wars and legal ideologies: the cases of Finland and Spain

14.30-16.00 Law and the Idea of Europe
Chair: Wolfgang Ernst
Janis Grzybowski & Walter Rech: The Constitution of Europe according to Carl Schmitt and Alexandre Kojève
Tommaso Beggio: The idea of Roman Law as a foundation of Europe after the Second World War in Paul Koschaker’s work
Jacob Giltaij: Fritz Schulz (1879-1957): Reinventing the principles of Roman law

10.00-11.00 Ideological and Historical Narratives of Civil War
Chair: Ville Erkkilä and Tommaso Beggio
Valerio Minale: Fascism and Roman Law in Italy: Arangio-Ruiz as a Protagonist of the Purge
Lauri Viljanen: Soviet-Finnish Historiography and Interpretations of the Finnish Civil War in the 1920-1930s

11.45-12.45 Liberal Empires and their Others
Chair: Jussi Sallila
Thomas Bennett: The production of a creole African law in South Africa
Stiina Löytömäki: International institutions and liberal legal reformism of the early 20th century: the issue of slavery and forced labour

Event location
All of the sessions of the conference are held on the Centre Campus of the University of Helsinki, at Porthania (Yliopistonkatu 3).

Transportation
You can get from Helsinki-Vantaa airport to Helsinki City Centre either by taxi (the fare is approximately 40-50 euros) or by bus (the buses take you to the Central Railway station). You can either take the city bus number 615, which costs 5,00 euros (cash (the driver doesn’t have to accept bills larger than 20 euros) or Travel Card only), or the Finnair bus, which costs 6,30 € (cash (bills larger than 20 euros not necessarily accepted), credit cards).

The metro station nearest to the event location is called Kaisaniemi.

Eating
Lunches are not covered by the conference. There is a university cafeteria in Porthania where the conference is held as well as in the university main building. There are also several restaurants near the campus. Here are some recommendations.

Ichiban Sushi on Mikonkatu 8. In the same building there is a Chinese restaurant Grand Shanghai as well as a Mexican restaurant Santa Fe. Morrison’s Grill & Green is located on Ateneuminkuja, behind the art museum Ateneum, where you can also have lunch. In Kaisa Library (Vuorikatu 7) there is Gaudeamus Kirja & Kahvi, which serves salads ans soups for lunch.

An Italian restaurant Vespa is located on Eteläesplanadi 22 and Il Siciliano on Aleksanterinkatu 36.

Belge is a Belgian restaurant, located in Kluuvi Shopping Center at Kluuvikatu 5. In the same building you can also have lunch at Hanko Sushi, Fratello Torrefazione coffee house or Armas-pikaruokala.

On Yliopistonkatu, right next to the university, there is Wrong Noodle Bar and next to it a Nepalese restaurant Base Camp.

By the Senate square you can have lunch either in Sunn Restaurant or Café Engel.

Other options can be found at Eat.fi Helsinki -service.

The purpose of the project “Reinventing the Foundations of European Legal Culture 1934-1964″ (foundlaw.org) is to trace the genealogy of the idea of a common European legal past, its creation, influence and implications of the theory as an ideological project.

As the project’s first major event, we are organizing a workshop in Helsinki on the history of totalitarianism, nationalism and legal tradition(s). We therefore invite papers that explore the complex relationship between history and law from a variety of perspectives to advance our understanding of how legal traditions are created. Confirmed keynote speakers are Wolfgang Ernst (Zürich), Peter Fritzsche (Illinois), Nancy Partner (McGill), and Bo Stråth (Helsinki).

Potential themes include but are not limited to:
– Totalitarian ideologies and individual identities
– History and narratives
– Nationalism and law
– The discovery of Europe as a theme
– Continuity and discontinuity of the European (legal) tradition

The conference is organized by the FoundLaw project, funded by the European Research Council.

Please submit your abstract (300 words) as a [word/pdf] file to Heta Björklund at foundlaw@gmail.com.
Please include your name, academic affiliation and address in your email. The deadline for submission of abstracts is February 15, 2014. We will inform of the selections by the end of February.

There is no registration fee. The organizers are unfortunately unable to aid in the travel arrangements or accommodation of participants.