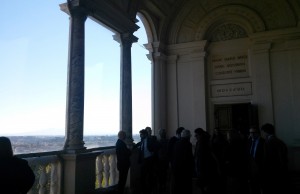 Participants of the conference at Villa Lante.

Click to read the abstracts of the papers to be presented at the conference.

Conference report: Using the past: Romanists, totalitarianism and its legacy.

11.30-12.30 Session 3
Chair: Magdalena Kmak
Marko Petrak: With Riccobono against National Socialism and Real Socialism: Two Apologies of the Roman Law in the Totalitarian Era
Tommaso Beggio: Three letters by Paul Koschaker to Salvatore Riccobono: considerations on Roman law at the time of crisis

14.00-15.30 Session 4
Chair: Tommaso Beggio
Stefania Gialdroni: The legal culture of the Romanist who wrote the Italian Civil Code under Fascism: An analysis based on the “Fondo Vassalli” of the Italian Senate Library
Valerio Rocco: Hegel’s conception of Roman law as a political weapon during the Fascist regime
Donatello Aramini: A Laboratory of Cultural Synthesis: the Institute of Roman Studies and the Fascist Myth of Rome

The purpose of the project “Reinventing the foundations of European Legal Culture 1934-1964” (foundlaw.org) is to trace the genealogy of the idea of a common European legal past, its creation, influence and implications of the theory as an ideological project.

After the two previous events, the first one in Helsinki, in May 2014, and the second one in Frankfurt am Main, in June 2015, the research group is organizing a workshop in Rome on the problematic relationship between history of law and, in particular, Roman law scholars, and the dictatorial or totalitarian regimes, especially with regard to the Italian and German ones. We therefore invite papers that explore the approach of Romanists towards the regime and the influence it had on their studies. If and to what extent the works of scholars may be considered as a reaction against the dictatorial power, or means to support it. The papers may analyze the repercussions that the study of Roman Law under the regimes had on the Law in force at the time and the influence it exercised on the later scholars, also with regard to the foundation of a new idea of European common legal culture.

Potential themes include, but are not limited to:
– idealization of Rome and its history and its implications;
– the influence of political circumstances and the experiences in Roman law scholarship;
– the different narratives of ancient Roman law proposed by the Italian Romanists, in order either to support, or to criticize Fascism;
– Roman Law in Italy between the regime and the new “Codice civile” of 1942;
– the roots of the new European legal history as a reaction to the totalitarian past;
– differences between German and Italian Roman law doctrine in perceiving the role of Roman law and their approach towards the regimes;
– different interpretations of Roman law as a foundation of a new idea of Europe.

The conference is organized by the FoundLaw project, funded by the European Research Council.

Please submit your abstract (300 words), in English, as a (word/pdf) file to Heta Björklund at foundlaw(a)gmail.com. Please include your name, academic affiliation and address in your email. The deadline for submission of abstracts is May 2, 2015. We will inform of the selections by the end of May.

The language of the meeting is English. There is no registration fee. The organizers are unfortunately unable to aid in the travel arrangements or accommodation of participants.