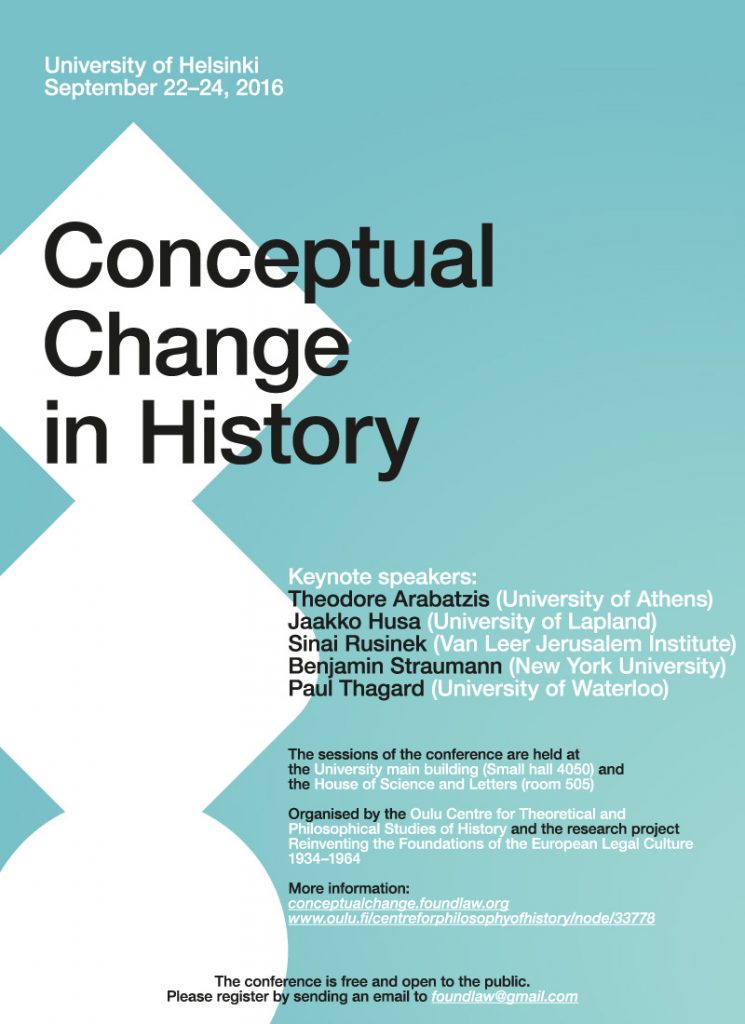 You can read or download the abstracts of the papers to be presented at the conference here.

Registration for the conference

The conference is open to the public and there is no registration fee. The organizers are unfortunately unable to aid in the travel arrangements or accommodation of participants. If you wish to attend, please send an e-mail to foundlaw@gmail.com by September 14th, 2016.

Programme of the “Conceptual Change in History” conference at University of Helsinki, September 22-24, 2016

13.00 Opening of the conference

13.45-15.15 Session 4
Chair: Katariina Parhi
Thibault Racovski: A phylomemetic approach to conceptual change: the case of scientific research on evolutionary novelty between 1965 and 2015
Corinne Bloch-Mullins: Concepts as Forward-looking: Rethinking the Question of Referential Stability
Yafeng Shan: Conceptual Change and the Nature of Scientific Concept

Some practical information about the “Conceptual Change in History” conference at University of Helsinki, September 22-24, 2016

Event location
The sessions of the conference are held at the University main building (Small hall (4050), Fabianinkatu 33, 00170 Helsinki) and the House of Science and Letters (room 505, Kirkkokatu 6, 00170 Helsinki).

Transportation
* You can get from Helsinki-Vantaa airport to Helsinki City Centre either by taxi (the fare is approximately 40-50 euros), by train, or by bus.
* You can find the timetable of the airport train here.
* The buses take you to the Central Railway station. You can either take the city bus number 615, which costs 5,50 € (cash (the driver doesn’t have to accept bills larger than 20 euros) or Travel Card only), or the Finnair bus, which costs 6,30 € (cash (bills larger than 20 euros not necessarily accepted), credit cards).
* The metro station nearest to the event location is called Helsingin yliopisto.

Organised by the Oulu Centre for Theoretical and Philosophical Studies of History and the research project “Reinventing the foundations of the European Legal Culture 1934-1964”.

It is often suggested that historiography deals with change in time. If nothing ever changed, it would hardly make sense to do historical research. The nature of conceptual change has been an object of acute interest in recent years in the history and philosophy of science, cognitive science, Begriffsgeschichte, the history of ideas, legal history and other fields. Although a seemingly simple notion, the term ‘conceptual change’ hides a complex set of questions and problems.

First, ‘conceptual change’ may be seen to imply a number of different claims. It could mean a change of a particular concept or a replacement of that concept by another. It could also refer to the emergence of an entirely new concept. On the other hand, the reappearance, circulation and mutable application of alleged ´perennial´ concepts in historical writing would seem to undermine the idea of any abrupt ´change´ in conceptualizing history. Concepts operate within their intellectual context, where issues such as tradition have an impact within conceptual change and permanence. Especially in normative contexts such as law and legal tradition, concepts and their interrelationship take on a formative and constructive character.

One is consequently entitled to ask what ‘change’ is in history. Ultimately it is a question of how historians have understood invariance, change and replacement in their texts. It may appear that invariance is the prerequisite of variance. When we speak about a change of X, something would need to stay unchanged. If there is no invariance whatsoever, the case would appear to be that of a replacement of X, rather than of a change. The problem becomes visible when one tries to understand the emergence of an entirely new concept. Does it presuppose discontinuity with respect to the tradition that precedes it? Or does it rather imply continuity, as Collingwood suggested: “Any process involving an historical change from P1 to P2 leaves an unconverted residues of P1 incapsulated within an historical state of things which superficially is altogether P2” (An Autobiography, 2002, 141)?

Third, how should the concept of concept be understood in the context of historiography? That is, what is the anatomy of this tool of representation? On the one hand, many different philosophical traditions have put forward theories of concept, but often their notions appear unsuitable for describing changes in history. On the other, many schools of history deal with concepts, but they often define them only vaguely or assume implicitly. Thus it is necessary to ask, for example, what the relation of concepts to language is and whether they should be seen as atomistic units or as composable to smaller elements. In addition, contributions from educational science, neurobiology and cultural studies challenge historians to rethink whether concepts should be perceived as mental or social entities. Sociolegal studies have challenged the normative value and permanence of concepts and examined the way that change in political, intellectual and legal contexts is reflected in conceptual change.

The language of the meeting is English. There is no registration fee. The organizers are unfortunately unable to aid in the travel arrangements or accommodation of participants.