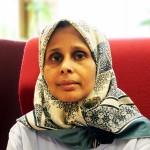 Mulki Al-Sharmani is acting as an affiliated member of the research project. She received her doctorate in cultural anthropology from Johns Hopkins University, USA (2005). Al-Sharmani was a research fellow at the Helsinki Collegium for Advanced Studies (2010-2011) working on the research project Muslim Family Laws and Gender Justice in Egypt. Currently, she is an affiliate researcher and part-time lecturer at Study of Religion, University of Helsinki. In addition, Al-Sharmani is a part-time researcher and research coordinator on the research project ‘Knowledge Building Initiative on Qiwamah and Wilayah’, with the global movement Musawah. This project is led by Dr. Ziba Mir-Hosseini, independent scholar and senior research associate at School of Oriental and African Studies, UK, and Zainah Anwar, Director of Musawah.

Al-Sharmani has done research and published on transnational migration and gender as well as Islamic feminism, Muslim feminist legal activism, and reforms of Muslim family laws. She is currently working on a book about Muslim family laws reform and gender justice in Egypt in the past two decades. For the past two years, she has also started preparatory research for a project proposal entitled Islamic feminism: Tradition, Authority, and Hermeneutics, which has been submitted for funding.

Some of Al-Sharmani’s recent publications are: