If the history of dictionaries has been a tale of relative scholarly neglect over the years, the same is still more true of medical lexicography. One looks in vain among reference collections for such subject headings, even in the catalogues of specialist medical libraries, including those which hold many medical dictionaries. And yet, with the problem of how to deal with the exponential growth of knowledge and how to distinguish the good and useful from the worthless and spurious which arose with the slow decline of the era of scribal transmission and the advent of printing, dictionaries which assemble, collate and re-distribute specialist knowledge became increasingly significant.

This can be traced not only through the history of the dictionaries as published artefacts, but also through the individual entries. To take a single example, the marked difference in defining scrophula between Robert James (A Medicinal Dictionary 1743), who discusses it at serious length, and John Quincy (Lexicon Physico-medicum 1719), who dismisses out of hand it as a genuine illness, is striking. Furthermore, in this area, ‘Every act of communication excludes as well as includes,’ as Professor Jim Secord wrote recently (2004: 662). 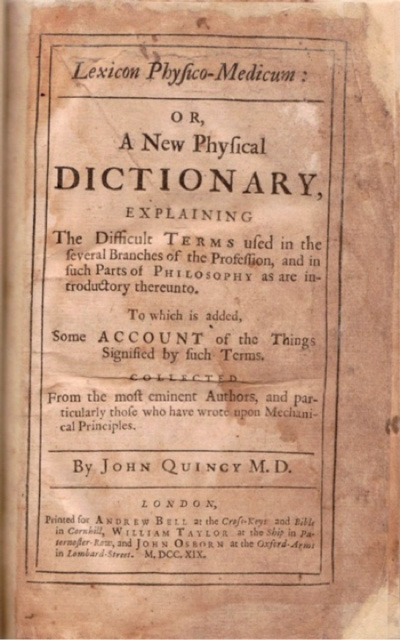 Literature on this is very brief and hopelessly inadequate for the most part. One still opens volume after volume on the history of early modern and eighteenth-century medicine, however, without finding so much a hint of the existence and role of medical dictionaries. Accounts of the early medical dictionaries have tended to present merely entries as curiosities, usually for being the first occurrence of a word, George Motherby’s first listing of panacea in his A New Medical Dictionary (1775) being a case in point. A piece by Mark Twain on Robert James, one of the longest early articles, falls into the same category, although it is a grisly and patronising account of the horrors of eighteenth century medicine, deliberately eschewing any attempt to understand it in its own terms.

There is certainly published research on medical terminology and medical terms in dictionaries, however, and this is an expanding area, but the dictionaries themselves and those who compiled them remain largely in the outer darkness. The first, by Andrew Boorde, dates from the mid-sixteenth century, John Quincy’s dictionary was still exerting considerable influence into the early nineteenth century, Robert James’s gargantuan compilation ran to 3370 pages, and was translated into French by Denis Diderot. Research articles on the history and nature of these fascinating dictionaries are slowly beginning to appear, but the whole area remains a goldmine of rich research pickings.

The lexicographers themselves are also poorly known, and sources such as the Oxford Dictionary of National Biography usually offer a bare minimum and occasionally outright misinformation. Benjamin Lara, the author of a surgical dictionary published in 1796 is not listed in the Oxford Dictionary of National Biography at all, and almost nothing is known about the life of John Barrow, whose medical dictionary appeared in 1749. Robert James is known mainly for his association with Samuel Johnson, which distorts our understanding of his life and work. 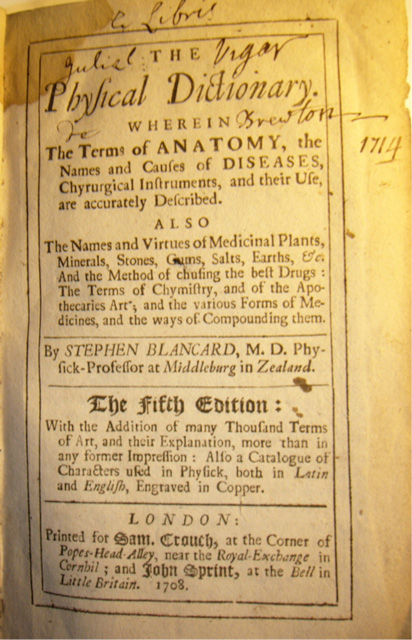 Blancard’s The Physical Dictionary, 5th edition, 1708, once owned by William Vigar, apothecary of Brewton in Somerset, who was buried in 1729.

I’ve been trying to redress this imbalance in a small way, and hope to publish a book on English medical lexicography in the next year or so.

McConchie, R. W. (2009) ‘ “Propagating what the Ancients taught and the moderns improved”: The Sources of George Motherby’s A New Medical Dictionary; or, a General Repository of Physic, 1775’ in Selected Proceedings of the 2008 Symposium on New Approaches in English Historical Lexis (HEL-LEX 2) edited by R. W. McConchie, Alpo Honkapohja, and Jukka Tyrkkö, 123-133. Somerville: Cascadilla Press.

McConchie, R. W. (2010) ‘Converting “this uncertain science into an art”: Innovation and Tradition in George Motherby’s A New Medical Dictionary, or, General repository of physic, 1775’ in Adventuring in Dictionaries: New Studies in the History of Lexicography edited by John Considine, 126-148. Newcastle upon Tyne: Cambridge Scholars Publishing.

2 thoughts on “The lost history of medical lexicography”