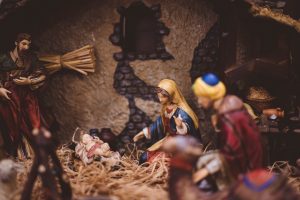 tings everyone! I’m Sara Jormakka, a theology student from the University of Helsinki. Currently I’m doing my internship for my Bachelor’s degree and I’ll be taking charge of this site for a while. Despite being still a BA student I have already completed my Master’s thesis in the hymnology seminar led by Tapani Innanen, and in this post I intend to tell a bit more about the subject of my thesis.

While I was studying in a Catholic university in Ireland, I noticed that they started their mass with a prayer for the Virgin Mary. The familiarity Catholics feel towards the mother of Jesus is indeed not a surprising discovery – in fact, sometimes Protestants tend to exaggerate it quite a bit. While some attempts to understand the similarities and differences between the Lutheran and Catholic understanding of Mary have been made before, I noticed myself being curious about what hymns have to say about the matter: how do Finnish-language Catholic and Lutheran hymns describe the Virgin Mary?

I was able to make my research that possesses a strong ecumenical flavour on a rather remarkable year, the 500th anniversary of the Reformation. My study of the Finnish Lutheran hymnbook included also the new hymns that were introduced in the year 2016, so through my research I was also able to investigate how the Lutheran view of Mary is evolving in the present time. Likewise, the Finnish Catholic songbook Cantemus was published in the year 2012, so as my source it was also able to offer a fresh and contemporary look at the Catholic hymnody.

While conducting my study, I had to return to the roots of Lutheranism that go back five centuries, to Martin Luther himself. In my personal opinion, Luther’s views of Mary, his idea of her as the model Christian who submits to God’s will, have greatly been lost during these five hundred years. While Luther condemned some aspects of the Catholic Mariology, he would still view her as a remarkable saint who prays for Christians. Interestingly, during the Finnish reformation, the image of Mary as a saint was lost gradually during the 16th Century. While the great Finnish figure of reformation Mikael Agricola promoted Mary in his early writings, later on he started being more and more critical towards her cult.

While in contemporary Lutheranism the role of Mary is to be the virgin mother of Jesus, in my study I discovered that the Finnish Lutheran hymnbook Virsikirja does not limit its view of Mary to this. Naturally the portrayals of Mary as a mother and a virgin were indeed the most prominent, but on the other hand several hymns would also present her as the “handmaiden of the Lord”, an aspect of Mary that Luther emphasised in his Mariology. Furthermore, I noticed that the Lutheran hymns favoured the image of Mary as someone who is lowly and ordinary. This would match the Lutheran view of grace manifesting itself in things that do not deserve it.

Despite the fact that the Catholic hymnbook Cantemus would hardly deny the view presented by Virsikirja, the Catholic hymns portray Mary as a somehow different kind of figure than the humble, mundane Mary of Lutherans. The Mary in the hymns of Cantemus is a powerful helper of the Christians and the Queen of Heaven, whose prayers have the power to shield believers from the upcoming judgement. In these texts, we are not invited to look at her as one of us, but more like the most powerful saint whose help and motherly mercy is always available.

The difference between these depictions might seem rather contrasting on the first glance, and it is indeed true that there are many points on Virgin Mary where Lutherans and Catholics disagree. While Luther emphasised the poor, miserable girl that was to become the mother of God, Catholic tradition often depicts Mary showing saintly qualities even in her childhood, her exceptionality culminating in the dogma of the Immaculate Conception, which refers to Mary being free of sin.

Despite these differences, as I was researching the Lutheran Virsikirja and the more recently added hymns, I noticed that between these two views there is a vast middle ground to work with. Especially the hymn number 937, which is set in the tune of important Marian song Salve Regina, features imagery foreign to Lutheran hymns but easily recognisable in a Catholic context:

Be blessed on earth, o Mary!

glory to our Lord!

While the Finnish Lutheran text obviously omits the Catholic idea of Mary as a queen of Heaven, the passage features an interesting reference to different angels, which connect her to the heavenly beings, rather than mundane humans. Furthermore, the notions of Mary as hailed and blessed echo the words of the Marian prayer Hail Mary, which are again taken from the Gospel of Luke. This said, the hymn manages introduce a more “Catholic” image of Mary to Lutheran hymnody while simultaneously adhering to the biblical roots deeply valued in the Lutheran tradition.

I cannot deny the fact that mostly the findings in my Master’s thesis simply demonstrate the differences between Lutheran and Catholic faith. However, seeing that the interest in many aspects of Mary’s character have been rekindled among Finnish Lutherans creates hope of mutual understanding and appreciation for this woman of many faces.

You can read my Master’s thesis here: