It has been asked why it is called “MILDRED”. Good question. Here is the answer.

The story goes this way. As we know, every good project have a name and an abbreviation. The shorter the better.

If you like to derive another name from this, you may remember Finnish actress Aila Svedberg who had a role of secretary in a famous radio comedy “Knalli ja sateenvarjo” (originally “The Men from the Ministry” by Edward Taylor and John Graham).

Name of this role was “Mildred Murfin”. This character has mainly positive attitude and energy, even if there is continually something exceptional going on in the office. So, why not use “MILDRED” as the name of the project?

Otherwise, if you like, you can consider the origin of the “MILDRED” as “Multilayered Infrastrucure Lattice for Digitalization of REsearch Data management“. Or something like that 🙂

The Project MILDRED was launched in a kick-off event at the end of April. With MILDRED the University of Helsinki will update its research data infrastructure to provide researchers with a state-of-the-art services.

MILDRED will offer tools and services for supporting the management, use, discoverability and sharing of data.

Goal in the strategic core

The kick-off event focused on the goals of the project: Research data management, open science, democratizing the data mining and decision making based on facts and values. MILDRED is about true collaboration.

The event was opened by Vice Rector Keijo Hämäläinen who stated that the paradigm is changing in many fields of science. The cahnge is enabled by digitalization and the open science movement. There is an on-going transformation in how research is performed, researchers collaborate, knowledge is shared, and science is organized. Vice Rector Hämäläinen emphasized that open science is both the top and the middle of the strategy at the University of Helsinki. The university will invest in fostering open science and developing services for researchers.

The University of Helsinki is ranked number one in open science in Finland, but as vice rector Hämäläinen said: “We can become even better” 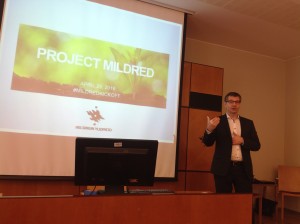 Secretary General Pirjo-Leena Forsström from the Open Science and Research Initiative described how openness is strengthening science and empowering scientists. Forsström also presented so called science accelerator which is based on a process model of the open science.

Professor Mikko Tolonen and Principal Investigator Minna Ruckenstein then discussed open data and the tools for data management in humanities. Ruckenstein characterized the environment where people with different skills can come together and collaborate as the basic need for open research. 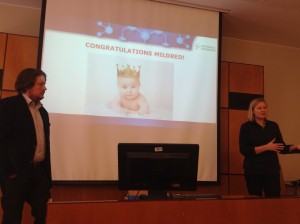 “Science without data is merely an unsupported hypothesis”

Project Director of Integrated Carbon Observation System Research Infrastructure, ICOS Ari Asmi presented his reasons for being all for open science. Asmi demanded more fact based decisions noting that science is about being open to the critical comments of others. As the saying goes, science without data is only an unsupported hypothesis.

Chair of the Steering Group of the project, professor Mikko Tolonen, introduced five subprojects of the MILDRED; Digitalization of Research Data Services Delivery, Data Repository Service, Data Publishing and Metadata Service, Data Storage and Backup and Implementation of Data Management Planning Tool – Tuuli. After the introduction participants had a possibility to discuss the project topics in an Open Space session.

As a closing remarks the chair of the steering group encouraged the participants to encage their colleagues who were not able to attend the kick-off, and send the good word around on open science, research data and MILDRED.

MILDRED encourages all projects, groups, departments, faculties to contact the project team and discuss their data related needs. Project MILDRED can be invited into a project group meeting.