The main building of the University of Helsinki
Street address: Fabianinkatu 33,
00014 Helsinki
(With step-free access) 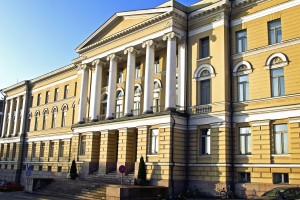 Information about the main building

The main building is situated between Fabianinkatu and the Senate Square and consists of the Old side and the New side. The main entrance, street address is Fabianinkatu 33 (the New side). The registration will take place in the main lobby on the first floor.

The Old side of the building is from the 1830s and the New side is from the 1930s. Note that inside the building the sides are connected via the 2nd floor. The rooms of the New Side are called sali (hall) (1-21) and those of the Old Side are auditoriums (with Roman numerals I-XVI).

The main building is designed by the famous Finnish architect Carl Ludvig Engel. This empire style building has served as the administrative and ceremonial centre of the University of Helsinki. The most important academic ceremonies, such as the opening of the academic term and master and doctoral promotions are organised in this building. The building was badly damaged during World War II but has since been rebuilt and renovated.

Information about getting around in Helsinki: