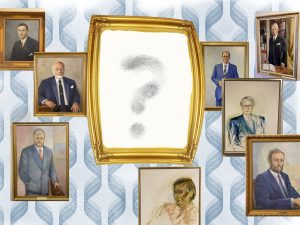 Many current teachers and researchers at the Helsinki University Faculty of Law worked closely with or otherwise remember the legal professionals listed below. Was any of them your teacher? Or were you colleagues? To our newest generation: have you heard of them, would you like to know about their life and work?

In the ‘Portraits of Invisible Legal Professionals’ blog, we remember our friends, colleague, and teachers. They have been divided into two lists:

One can of course belong to both lists, though should not be mentioned in both.

The timescales indicated are guidelines only and refer to the total time served e.g. first as a senior assistant and later as a professor. This blog is not exclusive to descriptions, rather the aim of this project is to remember staff members holistically as members of the community while taking into account their professional contributions and experiences. Many have taught, supervised dissertations, contributed to research, marked exam papers, helped in translation services, and assisted in many other ways in the day-to-day functioning of the faculty and university without recognition. They have had a significant impact on the university as members of our community. To this end, Sara Kalm has written about the gendered nature of academia, especially on its administrative side.

List 1 is reserved for members of staff who have already retired from work life or from academia, not current staff members. List 2 is as of yet incomplete and will be expanded. Both lists are to be frequently updated, so please do make suggests on who should be included and inform us with corrections if you see something missing or erroneous.

The creation of a third list, of e.g. judges, is possible if we find enough contributors. All expertise and assistance is welcome!

Teachers and researchers at the Helsinki University Faculty of law

Well-known lawyers (Finland and internationally), who have completed their studies or PhD in the Faculty (examples)