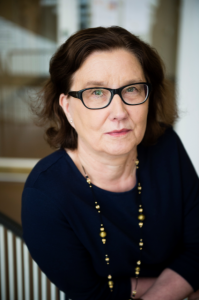 Constitutional law docent and lecturer Liisa Nieminen has been a long-standing and influential researcher and member of the faculty of law, who teaches constitutional law, health and biomedical law as well as social welfare law at the moment. Furthermore, she is the recipient of the 2020 Maikki Friberg Equality Award.

1. Were you the first woman defending her doctoral thesis in constitutional law in Finland? How did you commence your career?

I defended my PhD thesis in 1990 on the ‘emancipatory possibilities of fundamental rights?’. It was the first research project, which pointed out the strongly gendered dimensions of fundamental rights. At the time, there was very little supervision provided and a researcher was largely left alone with her work. Yet, I was always used to managing on my own. Though I was not the first high school graduate or even doctor in my family, coming from a small country school, it was not common to continue in a faculty of law, medicine or at a university of technology. Resilience and being used to hard work helped me. Though many structural changes have been made, many doctoral candidates are still largely left alone with their research.

In the same year that I defended, I published a book on children’s fundamental rights. Critics held that I had completely misunderstood everything and argued that children could not have fundamental rights. They were influenced by professor Ilmari Melander’s PhD entitled ‘On Children’s care’, according to which children were to be placed on the same level as objects. For its time, my book thus was very radical, but today everyone is ready to endorse my book’s arguments.

Afterwards, I went on to publish more than ten book on different topics, mostly touching on fundamental and human rights. Aside from the University of Helsinki, I have also worked at the University of Lapland. I was an Academy of Finland researcher/academy researcher for eight years. In addition, I have worked for three years as an ombudsman for the Finnish Parliament and for two years as the secretary general of the research ethics advisory board appointed by the Ministry of Justice.

During my time as a student, constitutional law was the most male dominated field of legal studies, which was predominantly of interest to politically active students. Some well-known public figures who did their thesis on constitutional law were for example Ben Zyskowicz, Anneli Jäätteenmäki, Johannes Koskinen and a little later Tuija Brax and Antti Rinne among others.

When I was a student, there were hardly any female teachers. I cannot recall attending a female teacher’s lecture with the exception of Irma Lager’s course on distraint law. Virpi Tiili was one of the teachers giving the private law basic course and Pirkko-Liisa Arolta (later Haarmann) approved my commercial law exam. Then, only few lectures were given. The only excellent lecturer I can recall is Pekka Koskinen.

2. Which other women have defended their PhD’s at the University of Helsinki in constitutional law?

In constitutional law there are only very few. Follwing me, the first female PhD was Any Mutanen, who transferred from the University of Eastern Finland to Helsinki to work as an assistant in constitutional law. She defended in 2015. In addition, Satu Heikkilä in 2016 (”From Final Judgement to Final Resolution, Effectiveness of the Execution of the European Court of Human Rights in Finland”) and Lia Heasman in 2018 (”The Corporate Responsibility to Protect Human Rights) defended their Phds, though their work is more human rights rather than constitutional law oriented. Drawing the line is difficult and for example, Minna Hanninen’s Phd on patenting of inventions based on human originating material from a fundamental and human rights’ perspective (2020) could be seen as a constitutional law work as it conducts an in-depth fundamental and human rights analysis. Yet, it was considered as health and biomedical law research.

3. What kind of a field of law has constitutional law been for female researchers in Finland? Has the situation changed during your career?

I was the first female assistant. The former professor Paavor Kastari is well known for having publicly recommended to women to content themselves with a Bachelor of Laws. In the 1960s, he had for example the possibility to employ Riitta-Leena Paunio (nee Heiskanen) as an assistant, who later became the first female ombudsman. However, Kastari could not hire her ‘because of her gender’ but chose a male assistant. I have heard this story both from Paunio as well as the hired male candidate. Neither of them defended.

Later in the 1990s, when there were more doctoral candidates in the field, I noticed the field’s male dominance and inward focus. Even men, who don’t belong to the same friend’s group have trouble accessing the inner circle. These same people also choose the field’s professors. There has been talk of the bias of experts, but little discussion on the biases in law. The recommendations written into the equality plan regarding the gender division of experts have also not been implemented.

How would you comment on the discussion of the hearings?

Traditionally constitutional law professors and possibly other experts go to the constitutional law committee as experts. Previously, it was still in reasonable proportions, but nowadays it can be up to a hundred times during a parliament’s period. Is this the central role of a university teacher? Though interactions with society are emphasised, this is not enough. Few manage to research and teach full time in addition to such a secondary occupation. Personally, I focus on research and teaching and do not use a tally sheet to keep track of hearings (compare to Portinvartija, Suomen Kuvalehti 32/2018).

Hearings are not completely male-dominated anymore as for example in EU-law hearings female experts are also heard. Yet, in order for an expert’s word to count, the expert needs to be heard often. Otherwise, one notices that one speaks to empty rooms as most committee members focus on completely different things or even leave the room.